After three long years of planning and preparations, a “missile” on wheels designed to reach 1,000 mph+ is under construction. Dubbed “Bloodhound SSC”, the team behind this ambitious project hopes to take down the current land-speed record of 763.035 mph with the help of Andy Green, Royal Air Force pilot, who will be taking the Bloodhound for a “spin” within two years.

The car will feature a jet engine and a rocket that will produce an incredible 47,000 pounds of thrust. If you have no idea how much is 47,000 pounds, take into consideration the fact that each of the Concorde’s four power units produces approximately 38,000 pounds at takeoff. This rocket car will have a steel lattice chassis which is going to be produced by aerospace manufacturer Hampson Industries.

This very ambitious objective was announced more than two years ago by team leader Richard Noble. Last summer, he along with his team unveiled a 1:1 mock-up of the Bloodhound at the Farnborough Air Show, organized near London. If you haven’t heard of Noble before, in 1983 he set a land speed record of his own. More than that, in 1997, along with his team, set the current land speed record of 763.035 mph which we’ve mentioned before. 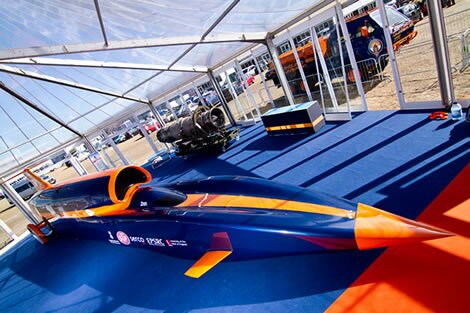 Britain has a long tradition in taking down world speed records. In the 20s and 30s, Sir Malcolm Campbell set a couple of records on land and sea. More than that, Britain has held the land speed record for 58 of the 112 years since the first one, achieved by Count Gaston de Chasseloup-Laubat who reached 39 mph somewhere outside Paris.

Back to the Bloodhound rocket car, it will also feature a V12 engine that will output 800 hp, developed by Cosworth which will be used in order to start the jet, pump high-test peroxide into the rocket and also power the hydraulic systems.

For a vehicle that was designed to reach more than 1,000 mph, aerodynamics is crucial. Noble along with Ron Ayres, chief aerodynamicist, spent about three years designing this rocket car which will be 42-foot-long. Even more remarkable is its weight – 14,158 pounds (fully fueled). The Bloodhound will ride on alloy wheels that will measure a whopping 3 feet in diameter. These wheels were designed by Lockheed Martin.

Early next year, the team expects to begin the low-speed tests, before shipping the rocket car to South Africa for flat-out runs in late 2012 / early 2013.