1980 Ferrari Pinin Up For Auction 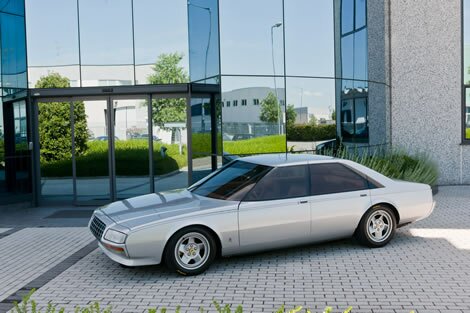 Probably the most interesting concept launched by Pininfarina in the 1980s is the Ferrari Pinin, which was designed in order to celebrate the 50th anniversary of the design studio and got its name after the founder of the firm, Battista “Pinin” Farina. The first sedan wearing the Ferrari badge made its official debut back in 1980 at the Turin Motor Show in Italy.

The style of this sharp, low-slung sedan was created by Diego Ottina and Leonardo Fioravanti, who was in charge for the design of epic cars like the Daytona, Dino or the P5. The interior features a rather minimalistic look while saddle tan Connolly leather was used to wrap most of the cabin.

Despite the fact that the car received a positive feedback, the Italian automaker decided not to put the sedan into production. After the Turin Motor Show, the Pinin participated at other car shows until 1981, while later on it was sold by Pininfarina to Jacques Swaters who at that time was the boss of the Ecurie Francorchamps Belgian racing team and a close friend of Enzo Ferrari. Three years ago, he sold the car to its current owner at RM’s Ferrari – Leggenda e Passione Auction.

We almost forgot to mention that the concept had no engine when it was revealed, but with the help of its current owner, it now is a fully functional prototype thanks the work of Oral Engineering. The Ferrari Pinin got a 12-cylinder 4.9-liter engine that packs Weber carburetors with the help of a former Ferrari Technical Director by the name of Mauro Forghieri. The power unit develops 360 hp and it is a modified version of the engine available in the Ferrari 512 BB.

The engine is mated to a specially-adapted 5-speed transmission borrowed from the Ferrari 400GT that sends the entire horsepower to the wheels in the back. They’ve brought other modifications to the car, like installing new brakes, a new suspension, a fuel tank and strengthening the chassis.

Lotec TT1000 For Sale, Based On Ferrari Testarossa, Styled Like An F40