If your name is Shaquille O’Neal, you might wonder what could go wrong in your life? Well, Shaq’s latest problem was his Lamborghini Gallardo which had to be modified by Gaffoglio Family Metalcrafters, so that the 7.1 feet NBA superstar could feel more confortable in it.

The Gallardo received custom extended doors, roof and side windows. The challenge was also to keep the car’s “visual integrity” with the changes. Glass fabrication was a particular challenge, so the company relied on their aerospace and coachworks divisions to make sure Shaq could fit in the car. And they did a great job, and the Lambo still looks normal, even if its now 12 inches longer. I imagine Shaq having a “Pimp my ride” reaction “ohh my good, thank you X, thanks Gaffoglio for pimping my ride”.

END_OF_DOCUMENT_TOKEN_TO_BE_REPLACED

Mitsubishi unveiled some more close to production-model shots of the upcoming Mitsubishi Lancer Evo X. The model, which was first presented in 2005 in Tokyo is getting closer to it’s production look, because it seems that the street production version Evo will be almost exactly like the one presented in this shots.

The new model features Mitsubishi’s S-AWC3 traction and handling system, that integrates the control of drive torque and braking management with the four-wheel drive system, and it will be powered by a new lightweight and high-performance 2.0-liter turbocharged MIVEC4 engine with aluminum cylinder block and a 6-speed automated manual transmission that contributes to exceptional performance with improved fuel economy. END_OF_DOCUMENT_TOKEN_TO_BE_REPLACED

Sometimes some very interesting gadgets show out there and we feel the need to mention it. Now we’ve got a real cool shift knob from the german company Indy-Cator. What makes this knob so special? Well, it has an integrated LCD displays that shows your current gear. Don’t know exactly how useful this is, but you have to admit, it look awesome. The gadget is available in red or blue display and you can get it now for just $169. END_OF_DOCUMENT_TOKEN_TO_BE_REPLACED

Sometimes you just have to say WOW. And that was our first reaction when we saw BMW’s latest project, the BMW CS Concept. Presented at the Shanghai Auto Show, this will probably be the next 8 series BMW, which will compete the Mercedes CLS and the upcoming Porsche Panamera, in the sporty 4 doors coupe class.

Measuring at 5.1 m in length, the high-end car features 21 inch wheels, giving the concept an aggressive look. Apparently, BMW will fit the production car with a 6.0L V12 engine derived from the V10 currently found in the M5 and M6. No official info from BMW so far, but we’ll let you know when there is. END_OF_DOCUMENT_TOKEN_TO_BE_REPLACED

Photos of this beautiful tuned Porsche Cayenne name Top Car Vantage GT were published on a Russian website and you have to admit, it look astonishing. Top Car is a Russian tuner and they created this beauty. END_OF_DOCUMENT_TOKEN_TO_BE_REPLACED

It seems like the crossover market looks very attractive to car companies, because we’ve seen lots of concepts lately. Presented at the Shanghai Auto Show, the Audi Cross Coupe Quattro is a very interesting concept, with it’s sporty and elegant look. The four-seater car sports 20 inch wheels, a fabric folding roof and a transversely positioned 4-cylinder 2.0-litre TDI engine under the hood, engine which produces 204 bhp.

Also, for the first time, Audi presents a single component lighting system that employs LED technology for both headlights and cornering lights. Almost sure this concept will be the start point for the upcoming Audi Q5 which we expect to see in the autumn. END_OF_DOCUMENT_TOKEN_TO_BE_REPLACED

The Buick Enclave will come equipped with a 275 hp 3.6L V-6 dual-overhead camshaft engine, which, together with Buick’s six-speed automatic transmission, will offer excellent fuel economy and great handling. END_OF_DOCUMENT_TOKEN_TO_BE_REPLACED

Here’s some interesting news. Last year David Beckham’s armored BMW X5 was stolen from Spain capital, Madrid. Through some strange coincidence, the bodyguard who took care of the car “forgot” to start the tracking program which monitors the car and prevents thefts like this. Strange for someone who is probably paid very good for this job. The soccer superstar bought this car after a kidnap attempt made on his wife, Victoria.

The $180,000 car was seized by the Macedonian police after two guys, apparently from the Bulgarian mafia, were caught at the Greece border. The Macedonian interior minister, who currently uses the car, said that she will gladly return the car to the soccer star if it turns out its his car. No reaction so far from Beckham, who now lives in the US, after signing a whooping $250 million five-year contract with LA Galaxy. END_OF_DOCUMENT_TOKEN_TO_BE_REPLACED 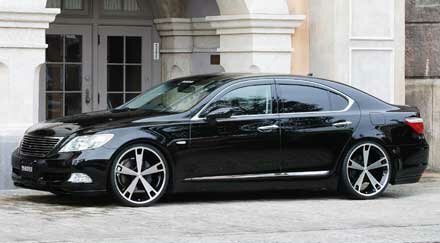 The Japanese tuner Fabulous presented a modified of the Lexus LS460. No detailed info on the exact mods, but, judging after these photos it looks pretty good, especially with thos 22 inch alloy wheels. Click “read more” for more pictures. END_OF_DOCUMENT_TOKEN_TO_BE_REPLACED 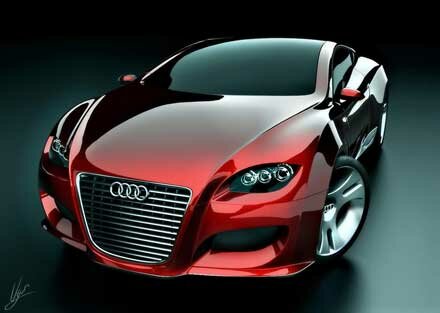 Surfing around the web, we came across this concept car, Audi Locus by Ugur Sahin. Looking like TT and R8′s son from the future, this concept car impresses with its curved design, creating a continuous flow from front to the back of the car. The Audi Locus looks really nice, too bad we’ll probably never gonna see it on the streets. Click more for more pics. END_OF_DOCUMENT_TOKEN_TO_BE_REPLACED

Announced last year, Startech presented a modified version of the Dodge Caliber, which now is more aggressive and more powerful. The 2.0 common-rail diesel engine got a 40hp upgrade, from 140 to 180hp and now the Caliber goes from 0 to 100 km/h in 8.6 seconds (9.3 for the regular version). The body kit include custom-tailored Startech lift-gate attachment, stylized tailpipes left and right, Startech sport exhaust system and a rear spoiler plus 19 or 20 inches five-spoke wheels.

The Startech Lifestyle interior package which will be available soon is offered for all Dodge Caliber models and include extravagant accessories such as polished aluminum door-lock pins, shifter and foot pedals plus high-quality floor mats imprinted with the Startech logo. END_OF_DOCUMENT_TOKEN_TO_BE_REPLACED

BMW officially announced the fourth generation of it’s highly competitive M3 series. Set to be released next year, the new BMW M3 is the first M3 to be powered by a 4-liter V8 engine which produces 420 hp and has a peak torque of 400 Nm at 8400 rpm. This engine takes the car from 0 to 100 km/h in just 4.8 seconds and to an electronically limited top speed of 250 km/h.

The design is sporty, the only things the BMW M3 has in common with the 3-series being the two doors, the bootlid, the windows, the headlights and rear lights. Everything else has been modified, the new M3 having two air intake openings, the function-oriented design of the front and rear air dams, the “gills” in the front side panels, the side-sills also in distinctive design, the roof made of clearly visible carbon fiber, as well as the exterior mirrors and light-alloy wheels

The interior is also special, with double circular instruments with white lighting and red needles, the M leather steering wheel and the newly designed center console. The door cutout trim with the M logo, the support for the driverâ€™s left foot made of brushed metal, the special design and color of the inner door panels, as well as the trim strip made of high-quality. Materials used for the interior of the new BMW M3 are high-quality, such as leather in carbon design or aluminum and underline the supreme and truly unique position of the new BMW M3. Click more to see more pics and also a video with the new M3. END_OF_DOCUMENT_TOKEN_TO_BE_REPLACED

Ever dreamed of a Maserati belt, umbrella or, I don’t know, a fluffy Maserati bathrobe? I know I didn’t! But if you did, hooray….now you can get it because the Maserati Store is now online.

Some other stuff you can get there are Maserati shorts, T-shirts, keychains, scale aluminum cars and remote controlled Quattroporte. END_OF_DOCUMENT_TOKEN_TO_BE_REPLACED

530HP Audi R8 by Abt Sportsline

These tuner guys are maniacs. Some of us still haven’t seen some of the cars on the street or in a showroom and tuned up version are launched. However, the latest example, the recently launched Audi R8 is special. Why is that? Well, this new version, modified by Abt Sportsline has all chances to become a super car. Again, you might ask why? Because the Abt R8 will have a distinctive body kit, parts of which are fashioned from carbon-fiber-reinforced plastic, aggressive bumpers, new hood, widened air ducts behind the doors, a prominent fixed spoiler at the rear, and towering 20-inch wheels in Abt’s signature five-spoke design.

Enough? You might say yes…we did. But nooo, Abt said the standard 4.2-liter V8 engine 420 hp engine is not good enough, they supercharged it and they claim it will deliver 530 hp, take the car from 0 to 100 km/h in 3.9 seconds and to a top speed of 317 km/h. That’s something. END_OF_DOCUMENT_TOKEN_TO_BE_REPLACED

…at least that what they claim, and it took us some specific details to see the differences. What about you, do you see it? Ok, we’ll be good guys and help you. The facelifted Volvo S40 now has a sharper nose and chrome framed grille with a 50% larger Volvo badge. It also sports new headlights with clear lenses and an enlarged single air intake plus a new tail light design that features LED highlights, new bumper and modified exhaust tip.

The Volvo V50, beside the front grille and the larger Volvo badge, now has a new grille and headlamp layout plus a distinctive three-part front air intake. In the back, the V50 feature slimmer tail light units that are equipped with LED brake lights, new boot handle, restyled bumper and modified exhaust pipes.

At the interior, both the Volvo S40 and the Volvo V50 got more storage spaces with larger cup holders and armrest storage bin. Other changes include modified instrument panels for the T5 and D5 models, Dynaudio speakers for the Premium Sound system, satellite navigation system. END_OF_DOCUMENT_TOKEN_TO_BE_REPLACED