Edo Shark for the Porsche 911 Turbo

After yesterday we presented the Lamborghini Murcielago by Edo, here is the “Shark” package for the Porsche 911 Turbo. The power is increased, from 480 to 550 hp, and torque gets twisted up to 460 lb-ft to 583. Edo claims that the top speed will be around 210 mph (330 km/h). Exterior modifications include an altered front valance and front lip, a revised rear spoiler, and quad pipes are about it.

END_OF_DOCUMENT_TOKEN_TO_BE_REPLACED

BMW is preparing a facelift for 6 series models, both the Coupe and the Cabrio, and they’ve presented the first official information. The luxury coupe got some minor exterior changes, a wider air intake, new LED indicators, and the positioning of the third brake light onto the rear spoiler. Interior changes include a more ergonomic rubber mount for the iDrive and Sun Reflective Technology for the leather seats in the Cabrio.

The German tuner Nothelle presented a 520 hp version of the Audi TT. The small beast is powered by a bi-turbo version of Audiâ€™s 3.2-litre V6 that now produces 520Hp (the series version has 250 hp) and maximum torque from 320Nm to a breathtaking 635Nm. According to Nothelle, this engine takes the TT to a top speed of 308 km/h (191 mph).

The German tuner upgraded the suspension system with a set of sport springs that lower body height about 25 mm, plus an aerodynamic kit that includes a three-piece front spoiler as well as other front apron air intakes (Double Frames), side sill elements, a rear apron, 20-inch rims and a 3-part rear spoiler. The modifications are available for both Coupe and Roadster versions.

View one more pic after the jump END_OF_DOCUMENT_TOKEN_TO_BE_REPLACED

After some spy shots broke loose a few days ago, BMW released an official press release announcing the BMW 1 Series Coupe and giving more details about it.

The flagship of the range is the BMW 135i with its 3.0L twin-turbocharged petrol powerplant. Offering 306hp and 400Nm of torque from its light alloy and magnesium straight-six engine, the 135i is capable of accelerating from zero to 62mph in 5.3 seconds before going on to an electronically-limited top speed of 155mph.

An M sport package with 17″ and 18″ wheels, unique bodykit, sports suspension, sports seats, a leather steering wheel and â€˜Mâ€™ labeling will be available for all models, as an option. The BMW 1 Series Coupe will be officially presented at the Franfurst Motor Show in September. END_OF_DOCUMENT_TOKEN_TO_BE_REPLACED

Here are the latest renderings of the upcoming Mercedes Benz GLK, presented by Motor Authority. The smallest SUV from Mercedes follows the design of the german producer’s SUV range, the only difference being the tear-drop headlights and the shortened taillights.

The Mercedes Benz GLK will offered with a 4-cylinder Kompressor engine and a 3.5L V6. These will be followed by Mercedesâ€™ new 4-cylinder Bluetec 2.2L diesel engine producing up to 204hp.

View one more pic after the jump. END_OF_DOCUMENT_TOKEN_TO_BE_REPLACED

Volkswagen gave some details about its upcoming strategies to develop more eco-friendly engines. First one is a new technology called “Combined Combustion System” (CCS), technology that mixes the fuel and air â€˜homogeneouslyâ€™ inside the engine, which removes any trace of soot and reduces polluting nitrogen oxides. CCS also requires a synthetic fuel for optimal results.

This new fuel type, called SynFuel, is derived from natural gas and is currently under development by several carmakers. Another engine technology that Volkswagen plans to develop is the “Gasoline Compression Ignition” (GCI) system, which Volkswagen says it will be as clean as petrol motors and as efficient as diesels. GCI works by using spark plugs during start-up and hard acceleration, but relying on sparkless compression ignition, like a diesel, during low load situations, such as cruising on a highway.

Both technologies, the “Combined Combustion System” and the “Gasoline Compression Ignition” are planned to be introduced into production cars by 2015. This is very good news and once again we see that the large car companies are starting to take an environmental approach in their strategies. END_OF_DOCUMENT_TOKEN_TO_BE_REPLACED

Lumma Design has released some renderings of its upcoming performance pack for BMWâ€™s E92 Coupe. Lummaâ€™s previous works, the CLR 600 and the CLR 500 RS were both based on M models, so this kit’s probably been designed specifically for the new M3 and it seems that the first production version will debut at Frankfurt in September, at the same time BMW will release the new M3.

The car will be powered by BMWâ€™s new high-rev 4.0L V8 engine featuring probably some performance upgrades that should lift the engineâ€™s output well beyond the 420hp figure of the M V8. From these renderings, we can see the BMW E92 Coupe by Lumma look very aggressive and will feature new front and rear bumpers, the latter integrating a custom diffuser and quad exhaust pipes, plus a carbon-fiber hood and 20″ wheels.

Yes, that is a Mercedes CLS 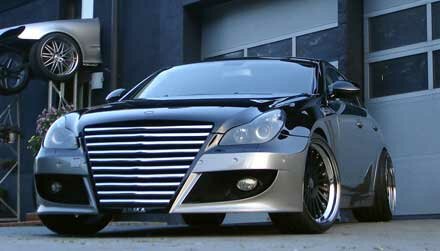 German tuner ASMA Design presented an eye-popping modified version of the Mercedes-Benz CLS sport limousine. Named Shark II, the kit has some really impressive feature like a long chromed front grille is now chromed or new 20-inch wheels, which transforms the CLS into a real eye-catcher. A sport exhaust system is also available plus the car now has a high-performance brake system and a stiffer suspension, which lowers the car by 2 inches.

There would be some out there who won’t like the CLS’ new look, but one thing is for sure, the owner of this car will not go unnoticed. END_OF_DOCUMENT_TOKEN_TO_BE_REPLACED

Volkswagen decided to offer Sirius Satellite Standard as a standard feature for some of its models, including the new Touareg, the New Beetle (including the convertible version), GTI and GLI models. The system will also be available as an optional feature for Jetta, Passat and EOS. Looks like Golf is left out (actually it’s fair to me, because no Golf-er listens to radio).

Volkswagen will be the only car manufacturer to offer Sirius, until 2012 and the system will equipp 80% of their vehicles, which will also include 3-months of free service. END_OF_DOCUMENT_TOKEN_TO_BE_REPLACED

Cellular Detection System from Highway Safety & Technology (HST) came up with a new system to help the police identifying those who use cellphones while driving. The system works like the regular speed radars, it is either mobile or fixed and it detects when a phone is used in the car and a photo is taken automatically.

Now I’m not saying that’s a bad idea, on the contrary, it’s only for the best, because drivers using cellphone are the cause of more and more accidents these days. But the system sucks. I mean, what happens when a passenger and not the driver is using the phone or the driver uses a headset? So the police should really invest time and money into either coming up with a good system, either taking care of the real problems out there. END_OF_DOCUMENT_TOKEN_TO_BE_REPLACED

According to the report, the Porsche Design P9521 features an 180 degrees rotating display, GSM Quadband (850/900/1800/1900 MHz), a 2 megapixel camera and a fingerprint reader, which protects your data via fingerprint security protection. Different fingerprints identification can be assigned to different set of phone functions. The new mobile phone will be available from fall 2007 in specialist mobile-phone retailers worldwide, except US, Japan and Korea at around 1200 E ($1700) END_OF_DOCUMENT_TOKEN_TO_BE_REPLACED

Mercedes is currently developing the next generation of C-Class Sportcoupe, which we hope to see at this year’s Frankfurt Auto Show. MotorAuthority showed us how this car might look like. The renderings are based on the prototypes seen tested in Sweden this year. Like the current model, the new Sportcoupe range will feature several different 4-cylinder variants but may include new V6 versions as well. The range-topper will be powered by Mercedesâ€™ 272hp 3.5L V6, but we wouldnâ€™t be surprised if a brand new AMG version is released.

No official news so far, so we have to wait for September to see what happens. END_OF_DOCUMENT_TOKEN_TO_BE_REPLACED

Official photos of the 2008 Volkswagen Tiguan

With the Tiguan, the upcoming baby SUV from Volkswagen, the German producer showed the first official photos of the car. VW gave journalists the opportunity to test the production prototype in Namibia. The car doesn’t look as spectacular as the concept shown last year in Los Angeles.

Expected to be officially presented at the Frankfurt Show in September with sales commencing in February 2008 the Tiguan will be offered solely with turbocharged engines: the TSIs (gasoline) delivering 150, 170 and 200 Hp and the TDIs (diesel) developing 140 and 170 Hp and it will be equipped with the same 4WD system (4Motion) that we find in various VW models. END_OF_DOCUMENT_TOKEN_TO_BE_REPLACED