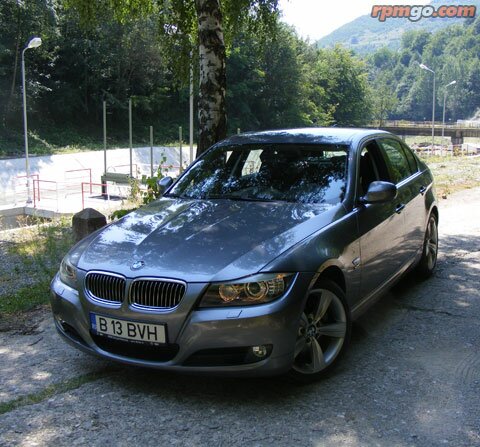 Facing tough competition from the more recently launched Audi A4 and Mercedes C Class, last fall BMW introduced the refreshed 3 Series, one of their most popular models. After driving its German rivals, it was time for us to take the new 3 Series out for a spin and see what it’s made of.

On the exterior, the first thing you notice about the facelifted 3 Series is its more aggressive front part, with more curves for the hood, restyled Xenon headlights with LED indicators and a slightly redesigned front bumper. At the back, the most obvious change is represented by the tail-lights, which were redesigned and are now using LED technology.

Overall, the new 3 Series has a more aggressive look than the old model, especially with the 5-spoke 18 inch star-spoke wheels (like the model we drove).

Being a facelifted model, we were also expecting a few interior changes, but we haven’t been able to see any new features comparing it to the old model. But that’s not necessarily a bad thing, because the 3 Series’ interior, though there’s not as much space as in the Audi A4, it’s pretty well structured and comfortable. The model we tested had about everything you need and want, such as leather seats, electronically adjustable heated front sport seats and leather steering wheel, so no complains over here.

The only thing I didn’t really understand is how can a 50,000 Euros (more than $70,000) car not have cup holders. Though some might say that’s a minor feature, when driving long distances it’s really uncomfortable trying to find an easy access place to put a can of soda. Plus that there are not many handy depositing spaces for all sorts of stuff like cigarettes, wallet or mobile phone.

Another thing I didn’t like was the sat-nav system. While the rest of the iDrive is ok (like all BMWs), the optional 2,500 Euros ($3,500) navigation is really crappy. I don’t know how it behaves in the United States or Western Europe, but here in Romania it sucks. I mean, there’s a problem when one of Romania’s biggest cities doesn’t even show up on the map. So we had to do it old school style, with a map bought from a gas station.

And here’s the part I enjoyed the most about this car. Under the hood, the 330d is powered by a 3.0 liter 6-cylinder engine that delivers 245 hp (180 kW) and max torque of 520 Nm. So, how does this translate on the road? Brilliant. Combined with BMW’s xDrive all-wheel-drive system, the car’s handling is brilliant. The city doesn’t offer you a lot of chances to see what it really can do, but once you take it outside urban areas and on some more curvy mountain roads, the car really shows you what it’s made of. The power is more than enough, the engine sound is great and the handling is perfect. Not to mention the car also doesn’t let you down when taken on rougher roads and very inclined roads. And another thing I liked was the suspension, which was a lot more comfortable than I was expecting. On bumpy roads you feel almost all the bumps, but not as much and as annoying as you’d expect from a sedan which wants to be sporty. And speaking of sporty driving, a big plus for the sport seats’ lateral support, which is excellent.

The only flaw I could find is the gearbox. The model I drove was equipped with a 6-speed manual transmission, but I would’ve preferred an automatic one. The manual, beside being a little noisy when shifting gears is also a little too brutal therefore uncomfortable.

The test drive’s conclusion is pretty simple: if I didn’t know the car’s pricing, I’d recommend it from the bottom of my heart. It’s fast, its handling is almost perfect, it’s very comfortable and the fuel consumption figures are very low for its performances. But when you look at the 52,000 Euros ($73,000) price tag, almost all of that enthusiasm goes away, because it’s not cheap. Yes, it’s a BMW and the car is worth almost every penny, but that doesn’t mean I’d recommend spending that much money on it. However, if you have that money and want a great sporty sedan, you might want to put the 330xd up there on the priorities list.

We didn’t like:
- high price (and no cup-holders);
- noisy gearbox;
- poor satellite navigation.

Big thanks to Alex Seremet from BMW Romania for all his assistance!