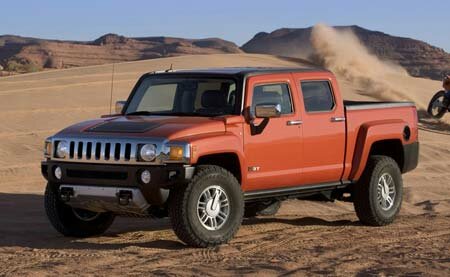 Hummer just announced the pricing for the pickup truck version of the H3, the smallest SUV from Hummer. This was confirmed by General Motors at Shreveport, Louisiana. The pickup will begin production in the third quarter of 2008 and the project is getting a $73 million investment.

Does anyone care about this? GM has problems and not long ago told that wants to sell many of its brands, including Hummer. Not to mention that the current Hummer generation sucks. I mean, the first one was cool, the second one is ok, but this one…no thanks!

The H3 has been revealed first time in 2004, at the Los Angeles Auto Show, as a concept. The president of GM Norts America described H3 as “the brand’s first true pickup”. This four-door H3T shares its midsize chassis with the Chevrolet Colorada and GMC Canyon and its been described as “larger than a midsize truck, smaller than a full-size”. H3T is basically a modified version of H3’s basic architecture with a 3.7L 5-cylinder or 5.3L V8 available.