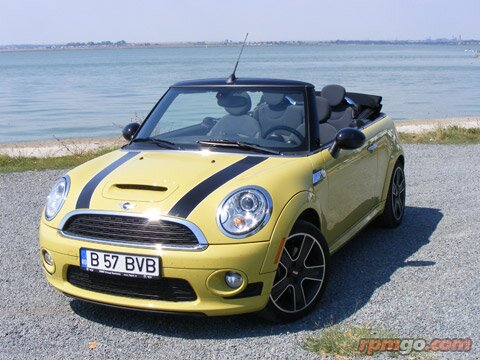 It’s been some time since I left the MINI Cooper S Cabrio back with the BMW guys and I still have a big, stupid smile on my face every time I think about it. Why? Because, without doubt, it was the most fun car I drove since I started Auto Unleashed/Rpmgo. So, let’s see why I was so thrilled about it:

At first sight, the new generation MINI Cooper S Cabrio (launched this spring) is not very different from the previous one. But a series of apparently small details create an overall impression of a more powerful and dynamic car. These details include a new hexagonal radiator grille, redesigned front bumper with larger fog lights integrated and restyled rear part (new rear bumper and trunk door with no hinges). Not to mention the color choices and equipment features, which are more attractive than the previous generation’s.

Just look at the model we drove and you’ll see MINI has done a great job in refreshing its Convertible. The Interchange Yellow with black stripes paint finish and the 17-inch Black Star Bullet wheels form an amazing combination, guaranteed to turn everyone’s heads (especially women’s).

While the new generation’s exterior changes are not that obvious, on the interior you can immediately tell it’s a new car we’re talking about. One of the major changes is the larger center dial, which now shows the speedometer instead of oil temperature or fuel leves. However, from the driver’s point of view, that thing is useless and distracting, I don’t know if I looked at it twice in the 5 days I drove the car. Luckily, you can also see the speed on the onboard computer’s display in front of you. Also, the dashboard (including the air vents) and the center console were restyled, to give the new MINI a fresher look. The retro-styled switches are a little confusing at the beginning, but once you get used to them, everything works like a charm. Beside the retro switches, the MINI also has a lot of funky gadgets, which, even though are useless, make you feel a little special. For example, there’s an option Openometer (though I can’t imagine who would pay for that), which is a small gauge located in front of the steering wheel, next to the tachometer, which shows how much time you spent with the top down. Very important piece of information, right? And another one is a series of small lights located above the rearview mirror and in the door-panels whose color can be changed from a switch (you can turn it red, blue, pink, purple, etc.). Again, not very useful, but I discovered it does a pretty good job impressing female passengers.

But let’s talk about the car’s main attractions, the drop top. Available in two colors, the fabric top goes down in 15 seconds, once you press a button. What I really didn’t like about the whole up and down top was the fact that I had to keep my finger on the button all the time during the operation, which makes you take a pretty uncomfortable position, especially with the switch being placed above the interior rearview mirror. That works great only if you have a passenger to do it for you. Otherwise, everything’s great: you feel great when the top’s down and the wind blocker is in place and noise level when top is up is very acceptable (considering it’s a caonvertible).

And if the whole drop top thing doesn’t impress you, then I must tell you the way the MINI Cooper S Cabrio drives is simply amazing. I’ve never driven a MINI Cooper S before and it just left me incredibly impressed. After almost a week of driving, I’d still be eager to find something to do outside just so I can drive it. Perhaps not the most powerful car available, but the go-kart feeling Mini is so proud of makes the car one of the most fun to drive cars I’ve tested. The 1.6-liter four-cylinder engine (with a Twin-Scroll turbocharger and direct gasoline injection) delivers 175 hp (128 kW) at 5,500 rpm. Not much, but look at Mini’s official performance figures for the car and you can imagine what I’m talking about: o to 100 km/h (62 mph) in 7.4 seconds and top speed of 222 km/h (138 mph). Didn’t test the acceleration time, but I can tell you that they are modest when it comes to the top speed.

Of course, all these also have a down side, which is the suspension. When having to drive on bumpy roads, like in every other sports car, you’re going to feel that, trust me. And also, it didn’t look like Mini paid a lot of attention to finishing, because when on the same bumpy roads, there a lot of noise coming especially from the rear part of the car (it sounds as if it’s going to disintegrate). But no worries, because you get over that easily once you push the gas pedal.

The MINI Cooper S Cabrio doesn’t come very cheap. In Europe, its pricing starts at around 27,000 Euros ($40,000). Is it worth it? Depends on what your looking for. If your top priority is how practical the car is, it probably doesn’t. But if your list contains the word “fun”, then the MINI Cooper S Cabrio should be one of the first models you take into consideration, because it’s simply awesome!

We liked:
- sporty look;
- really, really fun go-kart driving feeling;
- it’s a convertible, d’oh!
- surprisingly reasonable legs and head space for the passengers in the back.

We didn’t like:
- small luggage space, so not very practical;
- unconfortable suspension;
- weird sounds coming from the car’s joints.

Big thanks to Alex Seremet from BMW Romania for all his assistance!