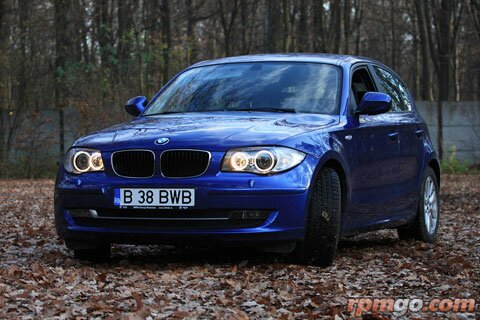 The BMW 1 Series isn’t really the most popular model for the Bavarian manufacturer, as most people tend to go that extra mile and just buy a 3 Series to get a bigger boot, more space, and bigger engines range. Before I drove the 116d, I used to agree with them, but for someone who doesn’t need a sedan, the 1 Series is perfect and can more than make up with its smaller weight the relatively small engine.

The new 116d offers the smallest amount of power, taken from the very popular 2.0-liter diesel, but is also the most economical and efficient version available, when coupled with the Auto StartStop function. But as I have learned, it is more than capable of wearing the BMW badge with honor.

Exterior
I’m quite fond of hatchbacks, but up until now, the 1 Series didn’t really stand out for me. After driving it for three days, now I’m always on the lookout for one. The model doesn’t really stand out with plenty of things, perhaps its low ride height, but when coupled with the Montego Blue paint scheme, it won’t go unnoticed on the street. 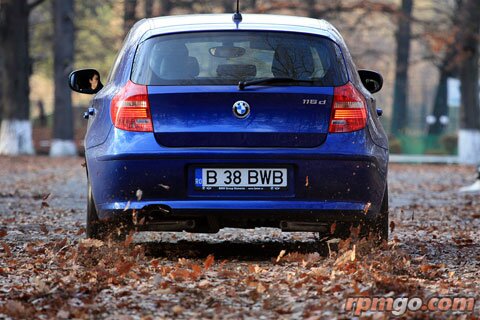 The style of the car was rounded off by the light alloy 17-inch wheels and the big tail pipe which made an impressive sound whenever you put your foot down on the throttle. Sadly though, you can tell that the overall design needs a revamp soon in order to attract new customers and stand out on the premium hatchback market.

Interior
On the inside, the BMW 116d impresses, but doesn’t seem flamboyant. It did have the €2,000 advantage package, which included things like Vlad’s beloved cup holders, velour floor mats, arm rest and leather inserts on the wheel and gear knob. What I enjoyed was the quality of the textile material used on the seats, and the Monaco Blue tint it had. The seats however, could’ve had better lateral support, as although the car had just 115 HP, it had a crazy amount of grip in the bends, and you needed to hold on tightly on the wheel. Another annoying fact was the handle which allowed you move the seat to the front or the back, which was sticking out from the bottom of the seat; it needs to be shortened fast as I hit my right foot a couple of times. 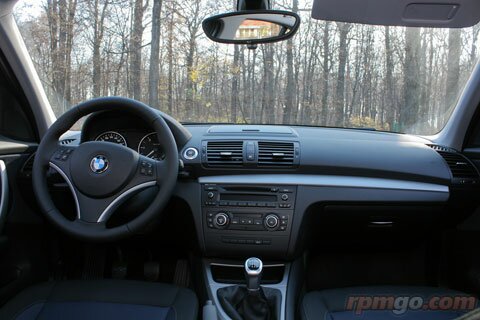 While pretty basic, the interior of the 1 Series does its job and makes you feel like you are in a premium car. The space is adequate in front, although your taller friends might not fit very comfortable in the back. The boot offers plenty of space, making the 1 Series a reasonable choice for a small getaway somewhere quiet. Storage spaces are plentiful, and you might find yourself forgetting a thing or two in all of those.

On the road
This is where the BMW 116d really shines. Although it outputs the least amount of power (115 HP) from the 2.0-liter diesel (the 118d gets 143, the 120d gets 177 while the 123d gets 204), it still manages to offer some thrills in the city as well as on the open road. Sadly though, one of the most annoying faults I found on the car was the gearbox, which impresses through short and sporty shifts, but is rather difficult to actually shift, not to mention trying to put in reverse. The amount of strength necessary to take it past its threshold and into reverse is very impressive, and it required quite a few tries to get it right. When you’re in a hurry to park, this “sporty” gearbox won’t help at all. 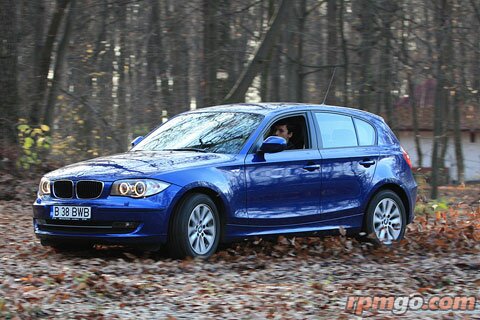 But what the gearbox fails to do, the engine supplants through low end grunt and a great sound, thanks to the aforementioned tail pipe, which thankfully doesn’t make it too loud or annoying. Coupled with the Auto StartStop function (which some people, aka Vlad, might not enjoy), the 116d is a great choice for city traffic, not to mention the fact that it claims a consumption of 5.3 liters/100 km in the city, 3.9 outside and 4.4 combined. I drove it both in and outside a very busy city, in a rather sporty manner, and the end fuel consumption after around 200 km was 6.2 liters; not bad but still a bit far from the advertised amount.

Handling-wise, the 116d really sticks to the road and is a great pleasure to drive. In case you find yourself in a safe environment, you can turn off the DCT (Dynamic Traction Control) and really go wild, as the engine can easily power the Bavarian hatchback around tight corners, largely due to the suspension, which although is a bit on the stiff side, won’t throw you from your seat in case you hit a pothole or go over some tram lines.

Conclusion
Overall, the BMW 116d put a smile on my face when I drove it and left me sad when I had to take it back to BMW. The hatchback handles great, had adequate amounts of power, and thanks to its plentiful technologies, will offer a great fuel economy even in the most crowded cities. While the six-speed manual gearbox might be adequate for bodybuilders, it will definitely annoy some people. Sadly though, the price is still an issue, as the car I had cost €24,704 ($37,000), without taxes.

We liked:
- the engine;
- the handling;
- the audio system;
- the fuel consumption;

We didn’t like:
- the gearbox;
- no navigation or on-board computer;
- price.