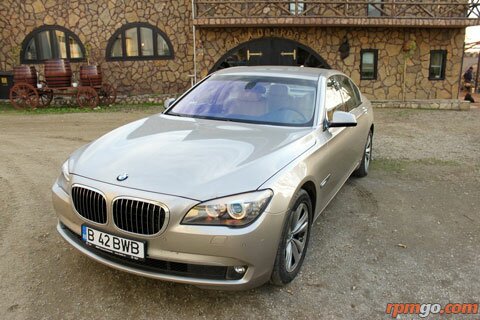 BMW 740d
With the new generation launched last year, the BMW 7 Series represents the flagship of the Bavarian carmaker and, although we’ve tested the 750i at the beginning of summer, we were very curious to see how a diesel engine would do under the bonnet of the German limousine. And not just any diesel, but the most powerful in the entire BMW lineup; now let’s see how impressed we were:

Exterior
Although it was launched last year, the new 7 Series isn’t exactly the cheapest model, so the streets aren’t filled with them yet, meaning that a certain admiration is still received by the car. After the last generation, which in my opinion was a complete failure (in any way you can think of), the current 7 Series seems like a breath of fresh air. Although it still keeps the robustness (and not in a good way) of the old model, the BMW designers managed to smooth out the lines and to give it a more “human” look. When you see it (and especially after you get in), you get the impression you’ll be sailing in a boat, and not a car designed for normal traffic, in or outside the city. But, as opposed to the previous yacht, the new one resembles a speed boat. 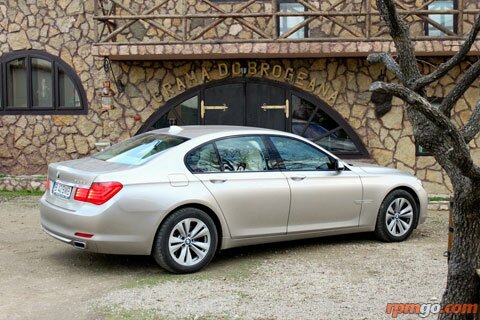 Actually, I think that BMW tried to compromise elegance with sportiness, and managed to pull it off. The first thing that pops in is the rear end, which looks very, very good. The taillamps are quite elegant (with the mini-neons already emblematic to BMW rears), and contrast with the two sporty exhaust pipes, which let you know that you’ve got some power under the bonnet. Although the front end didn’t blow me away, you can’t help but notice the huge nose, pushed forward, giving the car a very aggressive shark look.

Interior
As I’ve said, the first feeling you get when ‘climbing’ into the 7 Series is that you’ve entered a boat. You immediately feel like a small emperor, and it ain’t so bad, to tell you the truth. Although at first sigh you might be disappointed. Why? Because one would expect, especially on the flagship, to see something interesting and different on the dashboard. Let’s take Mercedes-Benz for example…when you wake up in an S Class, you immediately know in what car you are, and don’t need to get out and look at the car to figure out if you’re not in an E or C Class. Well in the BMW, besides the finishes (fabulous), the dashboard follows the same lines as the “smaller” Series. It might be what brought BMW the best financial results last year, among the luxury carmakers, but it kinda loses the “I’m Special” feeling. And when you’re paying 113,000 Euros ($165,000) on a such a car, well you most definitely want to feel special. 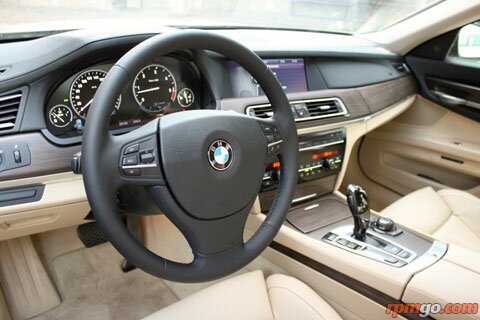 But when you see all of its options, you immediately know you’re in the best of the best: heated and ventilated Comfort seats, electronically adjustable and memory for both the front and the back seat passengers, control buttons with ceramic frames, back seats with massage, the coolest wood insertions I have ever seen and digital displays for climate and trip computer (integrate quite nicely). And if we busted our hands trying to close the doors on the 750i, this model had the Soft-Close function, which means magnetic doors (for the doors and for the trunk), very useful when you’re dealing with quite heavy doors. What I also enjoyed was the fact that it was the second car, after the Mini Cooper S Cabrio, which had the cruise control buttons on the wheel, instead of the classic little lever in the back of the steering wheel. It’s very fun, and gives a PlayStation-feel when you’re adjusting the speed from the buttons, without pushing any pedals. Last but not least, the car also has … cupholders!

The iDrive is still iDrive, meaning it’s easy to use and very handy. Also, there’s a nifty little thing I first saw on the xDrive Tour a few weeks ago and eagerly awaited to try out: the Night Vision. What does it do? Long story short, it scans the area (300 meters radius) in front of the car with infrared and, depending on the heat it detects, reveals what’s in front of you, on the road. The more heat the object/person in front of the car radiates, the whiter it appears on the display. And it does another cool thing…it detects pedestrians. If one is dangerously close to your trajectory, the display flashes yellow lights to attract your attention. While it’s very fun at first, I thought it was very distracting, but after a while you get used to it and it becomes a great tool especially on roads frequented by drunks who think they own the street (like it happens here, in Romania).

I only experienced the back seats for a short time, but according to those who stayed there longer (including me) the BMW 7 Series is basically made for the back passengers. You’ve got climate controls, seat controls, massage, entertainment system, headphones sockets and displays incorporated in the front seats (sadly I didn’t have TV reception, like I did with the X6). At one point, you can choose to have all the iDrive control, so the driver can’t interfere with the music you play, for example. 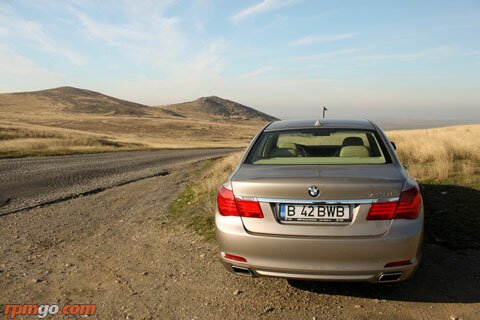 The handling is great, and, by far, the most interesting thing is the Dynamic Drive, which offers four driving modes: Comfort, Normal, Sport and Sport+. You’ve got a button (quite handy), where you select one of these modes and have different settings for the gearbox, throttle response, steering response, suspension settings and stability and traction control. If you won’t notice many differences between the Comfort, Normal and Sport, the true fun lies with the Sport+ one without traction control. Practically, in that moment only a tiny bit of DSC (Dynamic Stability Control) is on, a guardian angel If you will, to protect you from hitting a tree. But besides that, you’re on your own, and considering the fact that there isn’t an xDrive system, all the power goes to the rear wheels without any hesitation. It’s pretty impressive to see a 2 ton ‘tank’ drifting and doing donuts as easily as a Honda S2000. Of course, lacking the xDrive, there are some moments when you’d want to have it, so I guess it all depends on the customers’ tastes: you want ‘no worries driving’, go for the xDrive, you want excitement, cut it off the list. And speaking of handling, besides the fact that parking it is not the easiest thing (it’s hard to control it in an underground parking, and you’ll easily occupy two spaces), the 740d is quite agile in traffic, and easy to maneuver between tight spaces.

On the other hand, when your suicidal instincts are over and you select the Comfort mode, the BMW 7 Series becomes a true yacht on wheels. Smooth ride, no noise whatsoever and you can even take it on a farming field and you’ll still have a smooth ride. You might even get so relaxed as to fall asleep, but don’t worry, you’ll soon wake up … to fuel up the car. Of course the 740d, as with all top-of-the-line new BMW, comes with the EfficientDynamics package, including the brake energy regeneration system, which uses the energy from braking and takes it back to the battery. But although the official figures say something about a combined cycle consumption of around 6.8 liters/100 km (34 US mpg), I drove around 1,000 km, half in the city half outside, and got 14 liters/100 km (16 US mpg). It’s double, but considering the power and the weight of the car and the way I drove it, it isn’t that shocking.

Conclusion
Although we don’t have an equal to compare it to (we haven’t tested an Audi A8, Mercedes-Benz S Class or Lexus LS), but when you drive a car costing 95,622 Euros ($140,000), withough taxes (no matter what version), you expect only the best. That is what the 740d offers. Great options, good performance (not the best, but sufficient), decent fuel consumption and great maneuverability make this car a serious option for anyone in the target.

We liked:
-the quality of the finish;
-Dynamic Drive, especially the Sport+ model;
-Night Vision;
- no xDrive.

We didn’t like:
-lack of dashboard identity;
-although leather-wrapped, the steering wheel is quite thin and uncomfortable;
- no xDrive.