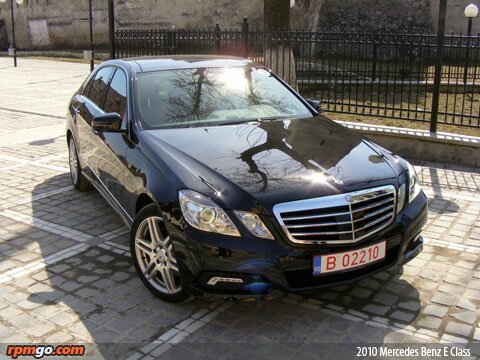 A couple of weeks ago, the reps from Mercedes Benz called us and invited us to the official launch of the new E Class. We always thought the E Class to be one of the most stylish luxury sedans around and we were thrilled to drive the new one, especially with Mercedes preparing a very interesting route, which meant driving around 400 miles through all kind of roads.

The new E Class follows Mercedes’ recent styling trend and, as we mentioned at that time, is heavy influenced by the Concept FASCINATION which debuted last year in Paris. The front part is more aggressive than the previous generation’s and the first you see are the new headlights (the four “eyes”), which are no longer round but have a rectangular shape. The LED daytime running lights integrated in the front bumper increase the sporty look. 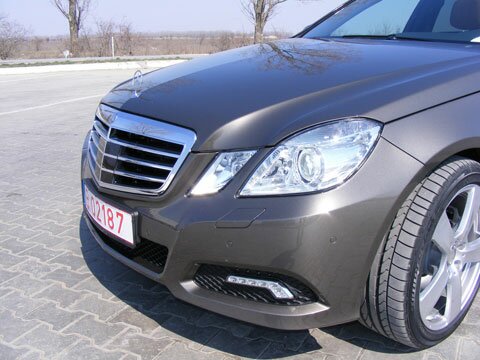 The only thing we didn’t really like about the car’s styling was its rear which, though it has the Mercedes stylish touch, is not as impressive as we had hoped for (the same problem from the new C Class).

I’m sure any of us would expect the highest standards when entering one the most popular luxury sedans around. And we weren’t dissapointed at all. Leather steering wheel, heated and ventilated perforated leather seats with a lot of funtions, panoramic roof and quality materials for all the controls and the instruments. Speaking of the instruments, the retro look instruments with the aluminium background of the panel looks amazing, increasing the sporty feeling you get in the car. 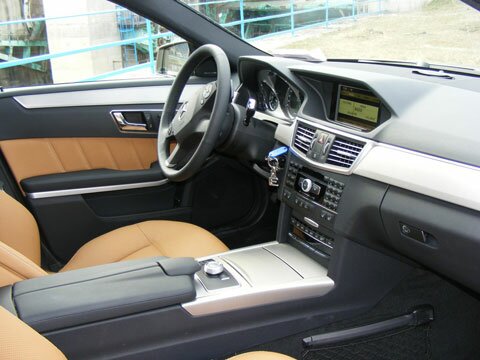 One of the coolest features was definitely the active multicontour seat package which include comfort head restraints and a two-stage massage function. These seats were ‘borrowed’ from its bigger brother, the S Class, and what they do is, depending on the steering angle, lateral acceleration and vehicle speed, fast-acting piezo-electric valves on the air chambers in the backrests vary their pressure and volume to give the driver and front passenger even better lateral support. That amazing, especially when taking corners at high speed. You feel like the car is basically giving you a protective hug and you’ve got an incredible safety feeling.

We weren’t really thrilled with the Mercedes infotainment system, BMW’s iDrive is a lot better, but that’s not stopping us from saying the interior is top class. It was really funny, because we had, as a passenger, a friend who is editor in chief at a famous fashion magazine and he was saying he felt like a “little president” in the back. And I don’t blame him!

During the two-days test drive, I drove three different versions, the E220, the E350 BlueTEC and the E350 CDI. There’s no point in saying the E350s were the most impressive. As for the E220, the only way I’d recommend it was if you really, really care about your driving license or if you really hate speeding tickets, because otherwise it’s a quite boring engine.

So, how do you feel in the E350? Awesome! The engine is powerful enough to make you feel the “king of the road” and all the safety and handling features make you feel very, very safe, especially the active seats. Like we said, Mercedes had prepared a very interesing and diverse route, with all kind of roads, from highway to mountain roads with a lot of curves. Was there a moment when I felt the E is going to do something else than what I ask? Not one!

So, what’s the verdict on the new E Class? Well, if you have the money (and boy, you’re gonna need it) and luxury is your middle name, I’d say yes, the E Class is the car for you. But if you’re the more sporty guy, I think you’d better reconsider. One thing’s for sure, the car really made us curious about the upcoming E coupe (the former CLK). I bet that, with the right engines, that car’s going to be a huge hit. Not that the new E won’t sell well.

As for a comparison with the competition, I didn’t get the chance to drive the facelifted A6 (hello, Audi!) so I can’t say anything about the driving experience, but, comparing to it, the new E’s look is incredibly elegant. It remains to see what will happen next year when the new 5 Series will be unleashed. I bet it will be an exciting competition between sporty and elegant. Who’s gonna win? Oh, and meanwhile, we’re waiting for the E63 AMG to come out, because that’s the real beast we’d love to get our hands on.