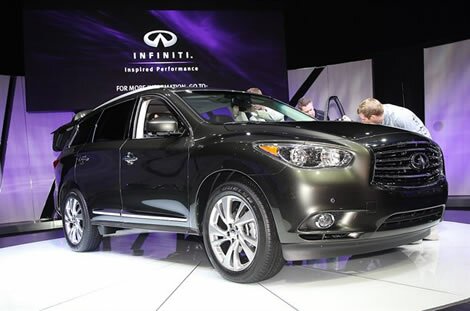 For this year’s edition of the Los Angeles Auto Show, Infiniti has decided to bring the new generation of the JX seven-seat luxury crossover, after they’ve unveiled the concept version back in August during the Pebble Beach Concours d’Elegance.

The production version of the Infiniti JX will get a V6 3.5-liter gasoline engine under its hood, a power unit that is capable of developing 261 hp. The car will be available in both front-wheel drive and all-wheel drive versions, and it will adopt various new technologies, including the Backup Collision Intervention which will allow the driver to spot crossing objects behind the car and the system is capable of applying the brakes in order to avoid collision.

The car will feature an impressive 14-speaker Bose studio surround sound system along with the Infiniti Connection Telematics system which will be able to automatically synchronize the driver’s calendar and offer navigation aid to appointments.