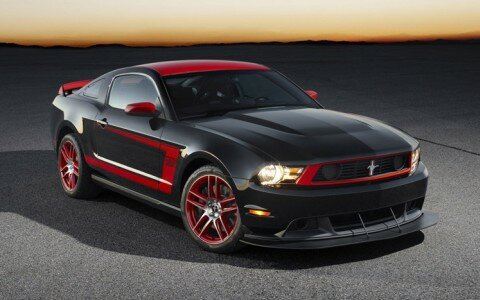 It was previewed by a track-only race car and rumored heavily a few weeks ago, but the 2012 Ford Mustang Boss 302 has now been formally unveiled.

The Boss is back and Blue Oval muscle car fans will be certainly pleased with what it’s packing under the hood. Power comes from an upgraded version of the new 5.0-liter V8, capable of 440 HP with 380 lb-ft of torque. A lot of upgrades were added, including ones from the track-only Boss 302R. We have a short-throw shifter, new suspension, upgraded brakes and a new clutch.

The result of these new parts and the extensive fine tuning from Ford? The muscle car is faster than a BMW M3 Coupe around the Laguna Seca track.

In honor of the Boss’ revival, a special Ford Mustang Boss 302 Laguna Seca edition will be made, boasting unique exterior as well as a retuned chassis, stiffer body and improved aerodynamics.

Pricing has yet to be revealed, but you can enjoy the 2012 Ford Mustang Boss 302 both in the photo gallery below and after the jump in a video released by the Blue Oval.