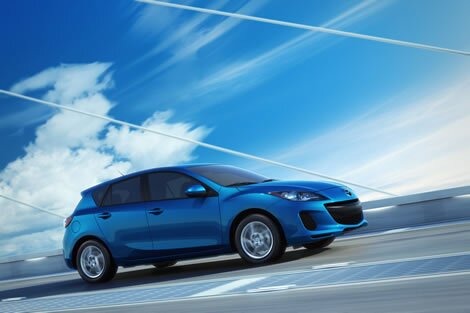 The 2012MY Mazda3 has arrived in the United States and wants to grab the attention of the customers with its performance-oriented, fuel-efficient technologies branded under the “Skyactiv” designation. The car is available in a 4-door sedan and a 5-door hatchback configuration and has a base price of $15,200, without taking into consideration the $795 destination charge.

The entry-level Mazda3 i SV sedan comes with a MZR 2.0-liter engine that develops 148 hp and is mated to a manual gearbox. If you want more features, you can choose the i Sport sedan that costs from $16,845 and can be ordered with a 5-speed automatic gearbox.

If you want those Skyactiv technologies, you will have to get the Mazda3 i Touring or the Grand Touring variant which comes with the company’s newly developed SKYACTIV 2.0-liter gasoline power unit that develops 155 hp and has a peak torque of 148 lb.-ft.

According to the Japanese automaker, this new engine delivers 5% more HP than the MZR 2.0-liter unit and also 10% more torque. In addition, it comes with 21% improved fuel economy and 15% more low- to mid-range torque. It has an EPA rating of 40 mpg on the highway.

Both the Touring models can be ordered with the newly developed SKYACTIV-MT 6-speed manual transmission as well as the 6-speed automatic one which also is part of the SKYACTIV technologies. For the latter you’ll have to pay an additional $850.