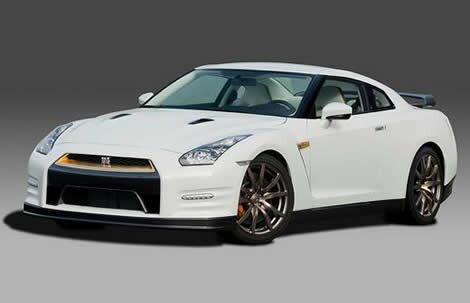 First of all, the car you see in these pictures is not tuned by Mansory or by any other tuner with bad tastes. As a matter of fact, Nissan themselves ruined the 2012 GT-R. This special edition was named “VVIP” and it is easily distinguishable by the black carbon fiber rear spoiler and the 24 karat gold plated side panels and grill. Obviously, there are dozens of VVIP badges.

The cabin is not that bad. They fitted the GT-R with a hand-crafted leather interior by master craftsmen at Seton Company Inc. Muelheim an der Ruhr in Germany. The seats are quite cool, featuring an exclusive quilted designed combined with a reticular pattern. Clients can choose from one of the many colors available for the cabin, including four upper area interior colors and seven for the lower area.

In addition, this special GT-R is fitted with a Bose sound system that can be exclusively tuned according to the driving position of each driver. This sound system has woofers made out from carbon fiber that can cancel vibrations.

The car is available at selected dealers in Qatar, Saudi Arabia and other Gulf Cooperation Council (GCC) countries, including Abu Dhabi and Dubai showrooms in the UAE.

I’ll never understand why car manufacturers and tuners decide to come up with an elegant edition of a proper sports car (or vice versa). In my opinion, it is one or the other. Don’t get me wrong, I like cars that are developed to be both sporty and elegant, but to turn one that is already on the market into the other… it will never work. The best example would have to be this. And don’t get me started on that preposterous price tag!