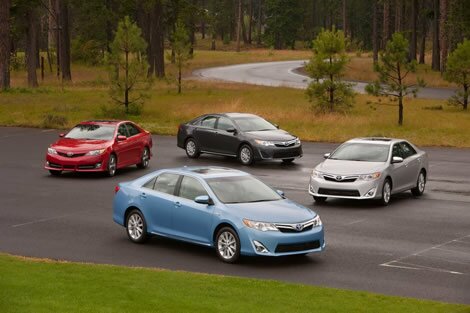 
We’ve seen some spy shots, we’ve heard some rumors, and now we finally get to see it – the 2012 Toyota Camry, officially revealed by the Japanese automaker this week. This would have to be the 7th generation of the model and it scheduled to go on sale in the United States at the start of October.


Clients will be able to choose from three engines. The entry-level unit will be an updated 4-cylinder 2.5-liter with 178 hp, which is 9 hp more over the old one, and a peak torque of 170 lb.-ft. According to the manufacturer, the model fitted with this engine will return 25 mpg in the city and 35 on the highway (28 mpg combined), which is a good 2 mpg more in comparison to the outgoing model.


These two engines are going to be mated to a 6-speed gearbox that comes with a sequential manual shift mode using the console shifter.


The third one will be available for the Camry Hybrid and will benefit from a new version of the company’s Hybrid Synergy Drive engine, which includes a brand new 4-cylinder, 2.5-liter Atkinson power unit which will replace the outgoing 2.4-liter engine. The combined output will be of 200 hp, which will be enough for a 0-62 mph sprint in 7.6 seconds. According to Toyota, this greener Camry will do 43 mpg in the city and 39 mpg on the highway, which is 30% better than the old one.


A novelty for the Hybrid model will be the EV Drive mode which will allow the person behind the wheel to operate the vehicle solely on the electric motor for up to 1.6 miles at speeds of less than 25 mph.


The hybrid variant of the 2012 Toyota Camry will be distinguished by the blue-hued logos of the brand as well as the bespoke alloys and the lower grill. Inside, the car will feature a model-specific trim and upholstery, plus a 3-dial Optitron gauge panel.


The car has just about the same size as the model it replaces, but the Japanese car manufacturer said that the rear-knee room has been increased by 1.8 inches and the rear middle seat legroom is also up by two inches. They managed to do this by reshaping the front seatbacks, moving the front seats and the accelerator pedal a little bit forward and repositioning the rear-seat hip point rearward.


The 7th generation of the Camry benefits from a more rigid body structure, along with an updated front suspension and a tweaked rear suspension. It is going to be the first model of the company that will come with EPS – electric power steering.


Customers will be able to order the car in one of the six different trim levels. Some of the tech goodies offered include the company’s all-new Entune multimedia system that offers support for mobile applications like OpenTable, Bing, movietickets.com, live weather, traffic, stocks, fuel information and sports.