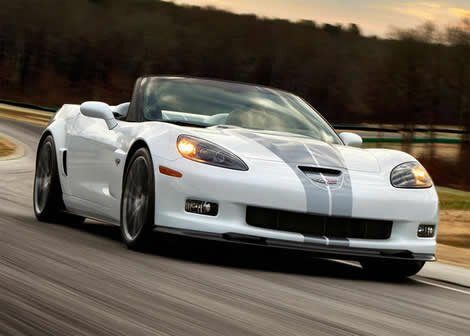 Earlier this week Chevrolet unveiled a special edition of the Corvette along with a 60th anniversary package that is going to be available for the 2013MY. The 2013 Chevrolet Corvette 427 Convertible Collector Edition and the new package are going to be auctioned in Scottsdale, Arizona at Barret Jackson on the 21st of this month. Both of them are scheduled to go on sale this summer but we don’t have any pricing information.

According to Chevrolet, the 427 Convertible Edition is going to be the fastest Corvette ever made and it will borrow some parts from the ZR1 and the Z06, including here the engine from the latter which is a massive 7.0-liter LS7 427 cubic-inch unit that pumps out 505 hp (377 kW) and a maximum torque of 470 lb.-ft (637 Nm).

This special edition of the Corvette will be fitted with titanium connecting rods and intake valves, along with racing-inspired high flow cylinder heads as well as dry-sump lubrication. Also borrowed from the Z06 is the battery, rear axle and the Magnetic Selective Ride Control. In order to lower the car’s weight, Chevy’s engineers equipped the car with a bunch of carbon fiber parts, like the fenders, hood and the floor panels. Carbon was also used for the rocker panels and the front splitter but these are only available at extra cost.

Thanks to the implementation of lightweight materials, this special Corvette weighs only 3,355 pounds (1,522 kg). It should be able to do the 0-62 mph sprint in only 3.8 seconds and can do the quarter mile in 11.8 seconds, en route to a maximum speed of 190 mph. During cornering, the car is able to generate up to 1.04g.