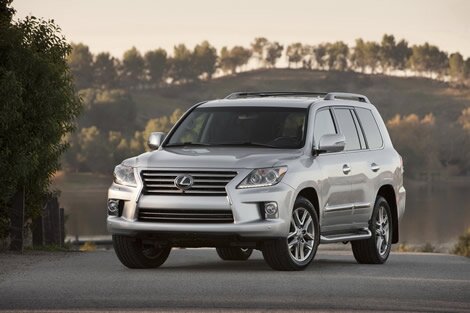 Several days ago Lexus introduced the facelift for the LX 570 model which now features the company’s new look that was introduced on the 3rd generation of the GS sedan. The new model bring a “spindle” grille, revised headlights and bigger fog lamp bezels, redesigned bumpers, turn signals integrated in the side mirrors, updated tail lamp graphics and a new number plate surround.

The interior cabin can still accommodate up to eight people and now features a redesigned instrument panel along with a color display, plus a new shade for the leather upholsteries and a new mahogany wood trim. Lexus has also introduced the Easy Access system for the driver’s side which retracts the steering wheel when the ignition key is turned off, making entering and exiting the vehicle easier. Both front seats of the LX 570 now feature improved cooling.

Under that big hood is a massive V8 5.7-liter engine that churns 383 hp and a peak torque of 403 lb.-ft (545.7 Nm). The entire horsepower is sent to all wheels via a 6-speed automatic transmission with a Torsen limited slip locking differential. While driving the car in normal conditions, the torque split is 40:60 but in the moment in which the software detects wheel spin, the VSC stability control and the A-TRAC traction control kick in.

A novelty for this model would have to be the introduction of the Turn Assist system that now applies more brake force to the inside rear wheel so that it could tighten the car’s turning circle. The 2013 Lexus LX 570 features an Adaptive Variable suspension which gives the driver three settings to choose from: Comfort, Normal and Sport. In addition, the car also comes with Active Height Control which is able to automatically lower the SUV’s suspension by 2 inches in order to help entry and exit and it returns on its own to the regular height when you start pressing on the gas pedal.

Other safety features include the 10 airbags which cover all three rows of seats, a pre-collision system that features Dynamic Radar cruise control, active front headrests and a reversing camera. Also on board are the navigation system, a premium audio system that has 9 speakers and offers iPod and USB, Bluetooth connectivity, along with a navigation system and four-zone climate control.