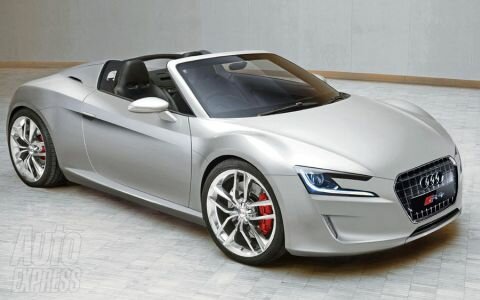 Seeing how popular the Audi e-Tron became after its unveiling at the Frankfurt Motor Show, it seems that Audi will create a production-ready vehicle by 2012. Confirmed by Audi of America’s president Johan de Nysschen, the R4 sports car will feature a top of the range electric version while gasoline-powered ones will also appear after it.

The report, revealed by the guys at AutoExpress, which also published these drafts of a possible design of the future Audi R4, show that it will most likely rival the Tesla Roadster, and will be based on the Boxster and Cayman platform from sister company Porsche.

The model, which will be situated between the TT and the R8, will be available in multiple body types, including a soft top convertible (shown here), a hard top one and a coupe. In terms of design, it will be quite aggressive and touch the futuristic side of things.


According to AutoExpress, it seems that an upgraded version of the drivetrain featured on the e-Tron will be built into the production R4 model, with the power coming from four engines, two on each axle, and offering around 300 HP and a massive 4,500 Nm of torque. The top speed will also be upgraded to about 140 mph (225 km/h).

Overall, it the news from the website is good, we can expect the electric Audi R4 to appear around 2012 or 2013, depending on the way the development of the model goes. Until then, we can only dream of this electric roadster.