We are redoing parts of rpmgo.com these days and, if something weird happens, don’t worry, we are changing things around.

We would also like to hear from you, if you have any suggestion

As you know, Robert Kubica, the F1 pilot, has recently been involved in an accident during the Italian Rally, driving a Skoda Fabia. Here is a 3D simulation of the accident. Hopefully, the talented Polish driver will recover as fast as possible.

Video after the jump.
END_OF_DOCUMENT_TOKEN_TO_BE_REPLACED

You Need To Be a Safe Cracker to Steal My Side Mirrors!

You might not know this, but Eastern Europe has one weird plague when it comes to cars: people steal the side-mirrors of expensive cars and they sell them afterwards (sometimes, the thieves even sell them to the initial owner). It even happened to us twice, while we were testing cars (BMW’s, for that matter, because they seem to be the most popular targets, though Audi’s and Benz’s have their share also). I remember the BMW representative in Romania telling me that they are so used to mirrors being stolen that they have a lot in stock just for that.

Police doesn’t do anything, so car owners look around for all kinds of ways to secure their mirrors.

Until now, I’ve seen the plate number put on the mirrors, I saw metal edges that would keep the mirror in place, but I;ve never seen practically a safe around the side-mirror 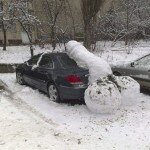 Parking in someone else’s spot is not that dangerous, usually. But what happens when the person that has that spot also has some talent with sculpture and think about helping your car look better with a snow p#$%s? Well, you can see in the image below the rest. Fortunately for the guy with the car, there wasn’t enough snow to sculpt some more. But still, the work of art and craftmanship are undeniable… See more after the jump and tell us what you think and, of course, share with your friends on Facebook, Twitter and more to have some laugh.
END_OF_DOCUMENT_TOKEN_TO_BE_REPLACED

Audi TT and Bugatti Veyron ar 2 of the most loved and wanted cars in the world (of course, both of them in their own price brackets). But what would a combination of the two look like? Well, some guy had the idea of designing a possible result and here it is: Audi OniX.

. Also, visit its creator on his deviant art page to enjoy his other creations. 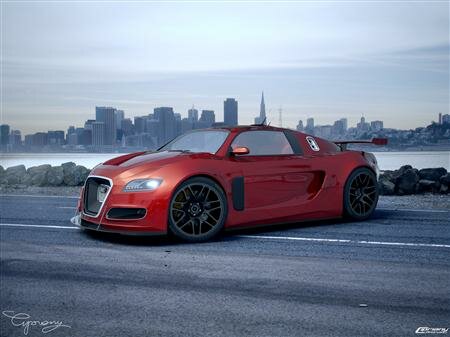 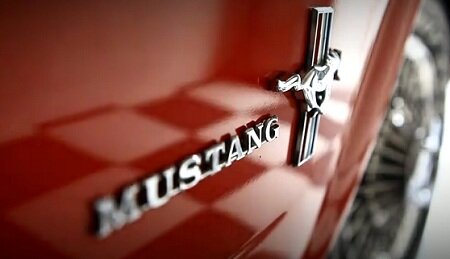 Ford Mustang is without a doubt THE muscle car by definition. From the great Mustang of 1968 to the reinvention in the last decade, all the Ford Mustang versions are visible in this great looking HD video. If you are a Mustang fan, you cannot not love this video, after the jump.
END_OF_DOCUMENT_TOKEN_TO_BE_REPLACED

This is a great funny ad for one of the most beautiful muscle car in the last 2-3 years: Chevrolet Camaro SS. You will really “not see it coming”

Here is a look at the extended version of the Super Bowl Ad of Mercedes-Benz. Aside from almost all the cars Mercedes-Benz made over the years, you can see the colour of Diddy’s pijamas, if you really want to

With less than a week left until the Super Bowl, Volkswagen released a teaser video of the “Black Beetle” commercial which will be aired on Sunday, during one of the world’s most viewed sport events. The teaser shows a beetle (the bug) speeding through the forest and it looks like the car won’t be present in the full commercial either, VW only wanting to build anticipation for the model. Enjoy!

END_OF_DOCUMENT_TOKEN_TO_BE_REPLACED

There’s not much to say about this video, except that it’s amazing how the guy shooting this movie is still alive and able to upload the clip on YouTube. Although, I can’t help thinking…should he curse the truck driver for driving like a maniac or should he thank him for managing the situation brilliantly and not killing him. What do you say?

PS: One of comments on YouTube is absolutely hilarious. You can imagine the truck driver shouting “Get out of my way, I gotta deliver this wood!”

END_OF_DOCUMENT_TOKEN_TO_BE_REPLACED

How NOT to wash your car! [video]

Us regular people, when we want to wash our car, we simply go to a car wash, pay a few bucks and a few minutes after we leave with our car shining. But for others, apparently, that’s taking too much time, so they tried an ultra quick method, using…an excavator. Yup, that’s right, an excavator! As you can imagine, when you put excavator and car in the same sentence, it usually ends up badly. Enjoy!

END_OF_DOCUMENT_TOKEN_TO_BE_REPLACED

[Video] When F1 and Moto GP move on ice

As if F1 and Moto GP weren’t spectacular enough, last week, the Ducati Moto GP team challenged the Ferrari F1 team to a very interesting contest consisting of two race, one in go-karts and the other in track-ready Fiat 500s. Nothing out of the ordinary, right? Well, not exactly, because both races took place on a snow covered ice rink. We’re not gonna tell you who won and we’ll let you enjoy the video where you can see Valentino Rossi, Fernando Alonso, Nicky Hayden, Felippe Massa and Giancarlo Fisichella. Sound good, huh? Enjoy!

END_OF_DOCUMENT_TOKEN_TO_BE_REPLACED

How can you sell an used car more expensive than a new one. Easy, if that car belonged to soccer superstar David Beckham. The Porsche 911 Turbo Cabriolet you see in these photos was previously owned by David and Victoria Beckham and was recently sold on eBay for exactly $217,100.

The car is a a custom built 2008 model, with a matte-black paint finish, blacked-out headlamps, black alloy wheels and “23″ stitched on both front and rear seats (23 is Beckham’s jersey number at the LA Galaxy). Also, the famous soccer player did less than 7,000 miles with the car, the odometer showing 6,774.

Unfortunately, the car has already been sold, so if you want a piece of David Beckham, you’ll have to wait a little more. (more…)

Every major city in the world is facing traffic problems, with millions of cars crowding the cities. And while some cities manage this issue pretty easy, by introducing taxes, restricting traffic or perfecting the public transport system, it seems that the situation in Beijing is pretty dramatic, because the authorities turned to a lottery system to control the number of newly registered cars in the Chinese capital. Why thy may look drastic, apparently no other solution worked especially considering 850,000 new cars were bought last year, turning the total number of registered cars in Beijing to almost 5 million, with 30,000 units being sold in one week, in mid-December. This also made Beijing authorities ban new car sales on December 24, ban which will be lifted on January 26, the date when the first new cars lottery will take place.

According to authorities, a number of 20,000 units will be allowed per month, with registrations being admitted until the 25th of the month and the lottery taking place the next day. There are already more than 100,000 registrations for the lottery, 53,549 of which applied on the first day, on January 1.

This only applies to new cars, because people whose cars are stolen, destroyed or traded will not have to get inline for the lottery and will be able to buy directly a new car. The estimation for 2011 is that beside the 240,000 cars from the lottery, around 160,000 will be purchased outside the lottery system.

Beijing authorities also took some other measures to contain traffic, such as increased parking fees and ban cars not registered in Beijing from driving in the city at rush hours, measure which is aimed at stopping Beijing drivers from getting around the restriction and registering a car in another city.

END_OF_DOCUMENT_TOKEN_TO_BE_REPLACED

Whether pilots or team officials like it or not, crashes are some of the most spectacular parts of motorsports, no matter if they take place on tracks, dirt or water. And here’s a collection of some of the craziest crashes that happened last year.

Check out even more crashes, after the jump.