The Last Need For Speed The Run Trailer

We hope you got the chance to play the biggest game in the Need For Speed Franchise so far. NFS The Run is now available in stores for PC, Play Station 3 and Xbox 360.

The final trailer shows gameplay sequences and tracks we never saw before from The Run, all across the story. If you ask us, the game looks great and gives epic experience.

Our suggestion is to play it, if not for being a car games fan, for the great story behind The Run.

If you’re an achievement gatherer you’ll definitely enjoy this one. EA decided to reward the account that were loyal to the franchise with unique unlockables in car models.

If you downloaded the NFS The Run Demo – the same account will bring you the BMW M1 Coupe to play with – for PS3 and Xbox 360.

The last developer interview for Need For Speed The Run came out. It features game designer Justin McGuire, the man behing most of the cop AI and tactics for the game.

Some new features will be installed for The Run players regarding the strategy of the police cars chasing the racers. Most of the agressive actions made by the cops while positioned behind your vehicle are put to the side and the focus will be on blocking from side or front positions, decreasing reaction interval for you thus making it harder to evade.

Justin McGuire talks about replacing cantity with quality regarding cop cars from The Run. Instead of a big number of black and whites crashing all over the road, the number will be severly decreased while the AI will be increased. Check out the full interview below and go thorugh these final days before the launch as quickly as possible.

Need For Speed The Run Takes Facebook Page to 4.5 Million

During the marketing campaign of Need For Speed The Run, the numbers of the NFS community grew through the roof. The last couple of months brought over 500k fans to the NFS Facebook page.

With the opportunities of a mainstream hobby, the car gaming page gathered fans from all around the world liking, sharing and commenting on car photos from the next NFS title, gameplay videos, events, interviews and making of clips from pre-production.

The highlight of the campaign was the teasing for a trailer directed by Hollywood producer Michael Bay. A teaser for the trailer was released with the call to action to unlock the full clip with likes and shares on a custom application added to the NFS Facebook page. That really spiked the fans chart and boosted the social media influence of the franchise.

The fans who joined their clicks for the Michael Bay Trailer weren’t dissapointed. The video was a master piece and was released also as a TV Commercial. It went viral and got almost 400k views in the first week. Check it out below.

With just a couple of days remaining until the release of the newest Need For Speed title, EA is pumping gas to the pre-order offer. Not one, but two new offers for gamers everywhere.

1. Order Need For Speed The Run through Origin and you will recieve one extra NFS title (PC digital download) for free including Shift, Shift 2 Unleashed, Undercover, ProStreet or Hot Pursuit. Details here. Available until November 14th.

2. Seven Electronic Arts Need For Speed titles for 79.99$. For a order of Need For Speed The Run any gamer can recieve a bonus: Shift, Shift 2 Unleashed, Undercover, ProStreet, Burnout Paradise and Hot Pursuit. Details here. Available until December 31th. What are you waiting for? 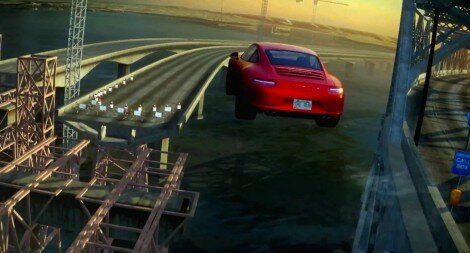 In order to make the game more of a journey, the creators of Need For Speed The Run used ideas and technologies from the teams that made Battlefield 3 and Frostbite 2.

Many of the enviormental details of Need For Speed The Run were enhanced to a high new level, therefore the gaming experience will be increased for both regular and new players in the franchise.

In the dual interview below all of the aspects from Need For Speed The Run were explained and compared with the other two names involved in the making. Less than a week to go, people!

Brian Tyler was the man behind the Need For Speed The Run Soundtrack. He made the playlist based on the main character’s evolution during the storymode of the game.

While a couple of weeks ago we found out one of the tracks (The Black Keys – Lonely Boy), the full list was announced today. It includes artists Lykke Li, Donovan and Black Pistol Fire.

As the official Need For Speed The Run official website quotes:  Depending on where you are in the game, you’ll hear different songs to match the location, intensity, and mood of The Run!. We agree and we feel that this is the way it has to be everytime.  Check out the full list below:

EA’s call to action for the all new Need For Speed The Run Michael Bay directed trailer was a succes and fans all over the world added their likes and shares in order to unlock the clip sooner than expected.

140 seconds of quality footage makes NFS The Run one of the best marketed series game in the franchise. If this game were a movie, we’d surely be convinced to buy the ticket after this breathtaking trailer featuring gameplay images and cinematics put together in a perfect way.

Check out Michael Bay’s creation below and spend your last week before NFS The Run’s launch building up the tension and preparing your consoles.

Hollywood director Michael Bay signed the latest Need For Speed The Run TV commercial. The NFS team allowed Bay to play the game in order to catch a glympse at the action and heat of The Run.

For now, only the teaser version of the commercial was launched with a call to action from the fans to hurry the unveiling on the Need For Speed Official Facebook page. For every like and share, points add up to the gauge to 250.000 mark that lets everyone see Michael Bay’s creation of the Need For Speed The Run TV commercial.

You can check out the teaser here. For the full video, go to NFS Official Facebook page and add another brick to the wall.

Need For Speed The Run Achievements

Welcome to The Run – Complete Stage 1

Walk in the Park – Complete Stage 2

Got to the Chopper – Complete Stage 8

Coast to Coast – Complete The Run on any difficulty

Win at Winning – Play through The Run on Extreme Difficulty

What else you got? – Beat a Friend Recommends

All for one – Complete a Group Objective

One for all – Complete 5 Group Objectives

King for a Day – Become a Stage Leader in The Run

In this interview with Need For Speed The Run Online Producer Thomas Belmont, Drew Hawn, the Community Manager of NFS pops some interesting questions about the Autolog.

The disscution lets the gamers know about some of the online features of the storymode like the possibility to compare progress between online friends. Autolog will feature achievement rewards (cars, personalization options) for online players for both head-to-head races and best time standings.

The NFS Autolog website will give players that are away from their consoles on request real-time information about their friends activity in The Run, Challenge Series or Multiplayer mode.

Check out the rest of the interview below, Need For Speed The Run Online Producer Thomas Belmont has a lot to say.

Need For Speed The Run The Black Keys Soundtrack

A new Need For Speed The Run Soundtrack song was released on Octomber 26th featuring the two popular Black Keys members, Dan and Patrick. The track will be a part of The Black Keys new album named El Camino which will be launched on December 6th.

”Lonely Boy” track sets the mood on the newest NFS The Run Trailer showing first look gameplay and cinematic images. Things are starting to line up as the launch date approaches.

More cars are shown, more tracks are revealed and the heat is getting closer. Take a look at the video below.

Need For Speed The Run Contest

You already heard about the partnership between Electronic Arts and Sports Illustrated for the Need For Speed The Run game. The contest has to do with Chrissy Teigen, one of the two models starring the game.

She has a challege for every Need For Speed The Run Demo player and wants to be faced on the race track. If you win, you could be a guest at a Sports Illustrated Swimsuit party coming up soon. All you have to do is:

Check out the video below and go get your joystick. This is a unique chance.

Less then a month to go until the launch of Need For Speed The Run and the disscutions are still building up. This week the Game Director was interviewed and asked about the mechanism, parts and actual gameplay.

The game modes were modified in some points like the number of opponents racing at the same time, about the survival mode where the racer will face the cops from every direction.

Battle mode got my attention and, as Need For Speed The Run Game Director Justin Weibe said, the challenge in this scenario will be to catch and pass drivers in limited time and then hold the lead until the end of the clock.  You should check out the full interview below.

While we are entering the final weeks before the launch of the next Need For Speed game of the franchize, Electronic Arts is bringing out the big guns.

A new (to the NFS series) Challenge Series concept will be featured starting Need For Speed The Run, designed for online and multiplayer mode. Over 70 challenges will be available in this new game mode, each of them allowing players from all over the world to compare times and climb all the way up in the main leaderboars.

You and your friends could also create a private chart and race each other for special cars to be unlocked for the winners. Sounds like hours of fun after the story mode is completed. Guess that the focus of Need For Speed The Run wasn’t only at the singleplayer mode after all. Check out the video.