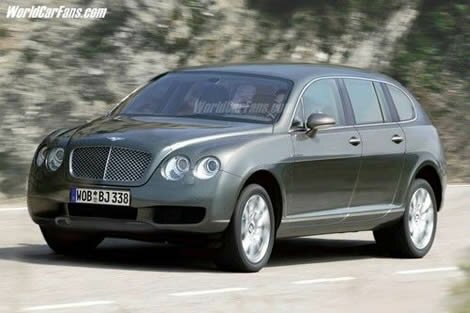 Bentley’s CEO, Wolfgang Durheimer, has confirmed this week that the company is working hard on a sport utility vehicle which if it will be green-lighted by parent company VW, it will probably go into production sometime in 2014. Durheimer told Top Gear and Car publications that Bentley is developing its own derivative of the next-gen VW Touareg, Audi Q7 and Porsche Cayenne.

According to Top Gear magazine, this all-new SUV from Bentley might be powered by a massive V12 6.0-liter TDI engine borrowed from the Audi Q7. Car mentioned that this Bentley model could get the all-new V8 4.0-liter twin-turbo gasoline engine that will make its first appearance in the upcoming 2012 Continental GT. In addition, Car said that chances are that we’ll see this SUV also with a plug-in hybrid powertrain linked to an 8-speed automatic gearbox.

Reports say that the SUV will share the modular MLB architecture that will be used for the next-gen Touareg, Q7 and Cayenne, and all of them will benefit from a lightweight aluminum spaceframe. Car added that this 2014 Bentley SUV will be more expensive than the Range Rover as well as the Porsche Cayenne.