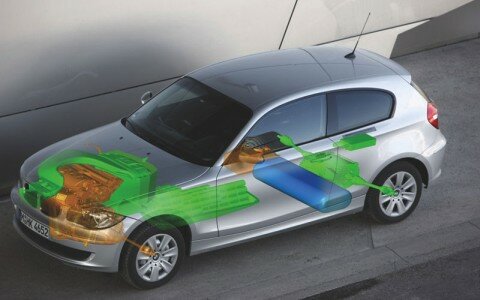 BMW has revealed that it is now testing out a new type of powertrain that uses a hydrogen fuel cell to generate electricity, store in supercapacitors and then use it to power an electric motor.

The new technology is already being tested on a BMW 1 Series prototype. On that test vehicle, it is combined with a regular internal combustion engine, that powers the front wheels. While some of you may jump to the conclusion that this tech is going to appear on the future front-wheel drive BMW and Mini models, an executive within the company confirmed that the setup was forced by technical issues.

It seems that the supercapacitors and the rear-mounted electric motor occupied too much space, and didn’t allow the 1 Series to retain its regular rear-wheel drive setup. As such, the APU (Auxiliary Power Unit) aka the fuel cell, generates its power, which is then stored in the capacitors, and transferred to the electric motor, that power the back wheels. The internal combustion engine is just used to power the front wheels and keep the prototype moving in between hydrogen refueling stops.

According to some voices, the technology hasn’t been approved just yet, so we won’t get to see it for quite some time. For more details on how hydrogen fuel cell vehicles work, check out our special on them.