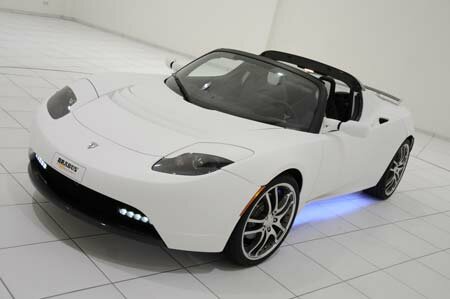 Wow, that’s something interesting. Though actually we were wondering when will the first tuning programs for electric cars show up. And it looks like German tuner Brabus, specialized in programs for Mercedes cars is among the first ones to announce a tuning program for the Tesla Roadster. No power upgrades here, only a series of styling upgrades. These include a “space sound generator” that makes the Tesla sound as if powered by a mighty V8, race car engine or “Beam” and “Warp” futuristic sounds. Brabus has also fitted the car with LED running lamps, underbody neon lighting, a rear wing, new wheels (18 inch on the front and 19 at the rear), plus a matte white paint finish. The outcome depends a lot on each person’s tastes, but all in all we think it’s a decent upgrade and it shows that electric cars are ready to go mainstream. Of course, that doesn’t mean Tesla is ready, because they have a lot of problems on their hands now, not to mention that there haven’t been many Roadsters available so far.