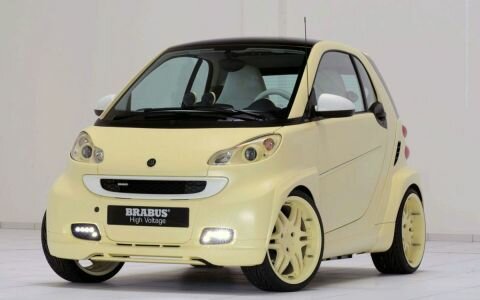 When you hear of German tuning company Brabus, you usually think of high powered Mercedes-Benz cars or machines pushed to their limits, like yesterday’s Smart ForTwo Ultimate R, but it seems that the company wants to try out new things, as it has just unveiled its production ready all electric version of the Smart ForTwo city car, dubbed Ultimate High Voltage.

Powered by an electric engine developed in partnership with Tesla, which can develop 82 HP with a torque of 280 Nm, which is available right from 0 rpm, this new city car will deliver unparalleled performance for its class. It will sprint from 0 to 100 km/h (62 mph) in 9.8 seconds, but the more impressive number is the time from 0 to 60 km/h (37 mph), of just 3.7 seconds.


But even though you won’t be the fastest, Brabus made sure that your car will be the noisiest, as the team fitted a sound generator under the car, which can output anything from an American V8 to a Formula 1 racing car or an Aston Martin.

The car also looks rather special from the outside, with a Tridionzelle paint finish, which I can’t say I really like, LED daylight running lights, wider air vents and 18-inch allow wheels. On the inside, drivers will be greeted by white leather upholstery with yellow stiches and a new dashboard set in the center console.


Overall, when this small city car will enter production, it will definitely have plenty of potential buyers. Hopefully until then we can find out some performance figures and battery charging times, to see if the car is any good.