The First Baltimore Grand Prix Came With A Blast

These guys didn’t even wait for the green light to get into o rumble.

During the warm-up of the first Baltimore Grand Prix, Tony Kanaan had some problems hitting the brakes before a narrow turn and climbed all over Helio Castroneves.

Luckily, he got out of the totaled rocket safe and went back to the pit-stop for a spare. He finished 3rd proving that the accident was just a technical failure.

1. Stop time the instant that the crash happens, get everyone to safety then let it rip. Video tape it for fun, it won’t hurt.

2. Have sex in your car with the engine running and no handbreak. End it just before you crash 20 stories down. Thank God for premature ejaculation.

3. Live eco. Build a tree when you’re a kid and have it grow at the same time you do. When the time comes, use it to block an incoming race car.
[youtube]http://www.youtube.com/watch?v=emg–GDH49k[/youtube]

5. Learn Kung-Fu and do a Ninja flip when necessary.
[youtube]http://www.youtube.com/watch?v=UCUn6m2fPaQ&feature=related[/youtube]

Mad man drives a fire truck in an airport

The police did not do a good job in taking control so the crazy man jumped on the driver’s seat of a fire department vehicle and started running around in circles through the airport.

After five minutes he crashed and got caught. Like a youtube user well said: all that was missing was some Benny Hill music.

After he got pulled over, the fellon had a fight with the police officer and managed to lock himself in the police car.

He drove away while chased by other police cars and crashed moments later while driving on the wrong lane.

The highway or the wrong way

Highways are not for everyone it seems. Picture this: you’re a truck driver, driving along on a Scottish motorway near Aberdeen and suddenly a small Corsa confidently drives into your lane. You swerve to avoid the devastating crash and roll over.

Then you go out and see that behind the wheel is…

… a 20 year old woman. Yes, women like her give good women drivers bad names. But still, we can’t quite figure out how she managed to end up on the wrong side of the highway.

Challenger gets heavily rear ended by a Ford truck

The most peculiar of accidents happen when you’re not paying enough attention. That’s an undeniable fact. Here’s a video of two people not paying attention at the same time. They certainly will be paying a visit to a car service very soon after this special encounter.

The Ford truck sends the Dodge all across the way to the other side of the intersection. Auch.

Watch the video and tell us who you think is at fault here.

Although we can’t be sure that this is entirely the pilot’s fault, we could imagine he had something to do with it. The story is that an Air France Airbus A380-800 clipped a Comair Bombardier CRJ-700 at New York’s J.F.K. International Airport.

We’re just glad that there was no one in the plane that got hit, because that would’ve been very, very uncomfortable. That will leave a nasty scratch though.

Whether pilots or team officials like it or not, crashes are some of the most spectacular parts of motorsports, no matter if they take place on tracks, dirt or water. And here’s a collection of some of the craziest crashes that happened last year.

Check out even more crashes, after the jump.

Usually, some well placed straps are all it takes for a successful dyno test. But not when you’re in Puerto Rico. The video below shows a Mitsubishi Lancer Evo VII which was being tested by a few students from the Mech-Tech College in Ponce, Puerto Rico. Apparently, someone forgot to take all safety measures, because at second 16 we can see the car violently breaking free of dyno and suffering some damage. Not too much, but we feel sorry that this could’ve been so easily avoided.

END_OF_DOCUMENT_TOKEN_TO_BE_REPLACED

This has go to be one of the stupidest things we ever wrote about here on RPMGO. Last Thursday, a 39-yo man and his 36-yo wife rented a Corvette from Hertz and stopped for a drink at London’s West End, a bar in Pacific Beach, San Diego. Here they were talking to a man, a complete stranger and when they talked about the Corvette, the man told them he never drove one, so they agreed on letting him drive their rented one. Great idea, don’t you think?

Well, the man drove the car, started doing donuts in the sand and, at one point, lost control of the car which ended up in the ocean. The man quickly ran away, leaving the two idiots talking to the police and taking care of the mess he got them into.

Not much we can comment on this, except some people are really, really stupid. Check out a few videos of the Corvette taking a swim, after the jump. END_OF_DOCUMENT_TOKEN_TO_BE_REPLACED

Ok, so what happens when you put an idiot inexperienced driver in a $1.6 million super sports car? Nothing good, of course, just watch what happens to this driver trying to take out a Bugatti Veyron for a test drive. While backing up, he manages to crash into a Toyota waiting at a red light and then scraping the front end of the car while trying to drive back onto the sidewalk. Wondering what this little incident cost the driver? Only $30,000.

Check out the video after the jump. END_OF_DOCUMENT_TOKEN_TO_BE_REPLACED

Michael Bay’s Transformers series is filled with car action and this means, of course, a lot of things can go wrong. Well, this is one of those moments. While filming in Washington D.C., on 3rd Street and Maryland Avenue, the famous yellow Camaro crashed into a police SUV and suffered some serious damage. The crash wasn’t in the script and according to FOX 5 the SUV was driven by senior explosive technician who was rushing to a nearby location to a call for a suspicious package and was using a different radio channel than the policemen who were securing the perimeter.

After the incident, the Metropolitan Police Department issued a statement saying that an investigation is on the way and that filming of the movie will be suspended in the meantime.

Videos after the jump. END_OF_DOCUMENT_TOKEN_TO_BE_REPLACED 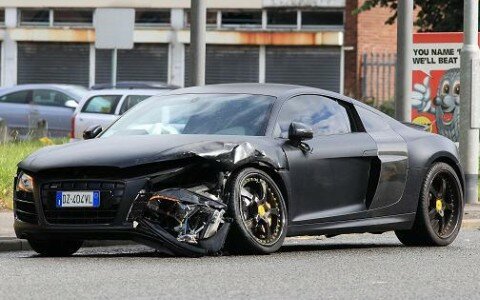 Seeing as how the Ferrari 458 Italia is currently dominating headlines with its fire prone nature, a new incident seeks to keep the also flammable Audi R8 on top.

Manchester City football player Mario Balotelli has crashed his matte black Audi R8 on the streets of the British city, presumably in a collision with a BMW.

While the German supercar didn’t burst into flames, like in certain recent incidents, the front end is pretty damaged. Luckily, Balotellli sustained no injuries and is already training alongside his teammates. With his massive salary, courtesy of the sheiks that own the Manchester City club, he also won’t mind the repair bill for the R8.

END_OF_DOCUMENT_TOKEN_TO_BE_REPLACED


Here we are with yet another supercar crash, but this time (luckily) no fire happened, like with the recent Ferrari 458 Italia or Audi R8 incidents.

It seems that a German Mclaren F1 owner decided to take the expensive hypercar for a run on the famous Autobahn. Sadly, according to police, another driver pulled out in front of the powerful model and the F1 driver swerved to avoid crashing.

While you may think this isn’t a serious accident, the bill for the repairs is estimated at around $130,000, more than the price of a lot of brand new supercars.

Still, the driver escaped unharmed, and is definitely relieved to see that the McLaren F1, which now is sold for a few million dollars, hasn’t been totaled.

END_OF_DOCUMENT_TOKEN_TO_BE_REPLACED


Without a doubt one of the most expected stages of the 2010 World Rally Championship season is the Rally of Finland.

The Scandinavian special stages are spectacular in nature, boasting a tough gravel surface with big jumps and perilous corners.

Even though he was racing on his home turf, the first day of the rally got the better of Ford driver Mikko Hirvonen, who crashed during one of the stages. Even though the accident was spectacular, the driver, together with his teammate, managed to escape without a scratch.

Check out the footage of the Hirvonen’s big crash after the jump.
END_OF_DOCUMENT_TOKEN_TO_BE_REPLACED