We don’t have a lot of news coming from Daihatsu unfortunately, but this week we are happy to report that Toyota’s arm of tiny cars has launched a new version of its Mira model, dubbed e:S, which features a bunch of revised and new technologies that have been introduced in order to make the car more fuel efficient.

The automaker stated that they have upgraded all of the aspects of the power unit, gearbox, body structure and thanks to these upgrades, the car is now 40% more fuel efficient than the current models in the mini segment that have a petite 0.6-liter engine.

Daihatsu Copen Revival In The Works

To be honest I’m not what you’d call a fan of the Daihatsu brand but I’ve always had a soft spot for its cute Copen convertible. Those of you who like this car will be glad to hear that according to insiders within the company, a new generation of the model is under development and it seems that it will be powered by an engine from its parent company, which if you didn’t know is Toyota.

The previous generation of the Copen was discontinued this year and had a small 660cc turbo engine which was replaced by a more frugal 1.3-liter power unit in order to meet the stricter emissions rules.

The new one which Daihatsu is working on will go back to its roots and sources say that it will be powered by a 2-cylinder, 0.9-liter gasoline engine that will use roughly the same technology of the TwinAir engine found in the funky Fiat 500. This new car promises to return 90 mpg UK while CO2 emissions will be below the 80 g/km mark.

Most likely, the all-new Daihatsu Copen is going to be wider and longer than the discontinued model due to the reason that the automaker’s bosses definitely want the car to comply with the latest safety regulations. The same sources say that it will probably still have the folding hard top of the original model.

Rumors say that Daihatsu will launch the new generation of the Copen sometime in 2013 and if we learned one thing from this automaker is that the car will probably be very cheap. 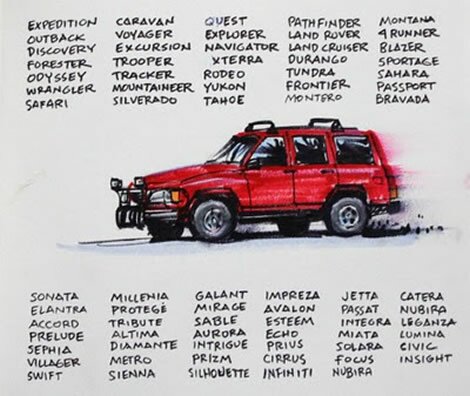 The success or failure of a car is greatly influenced by its name. Cars are not all about engines, gearboxes, gadgets, safety features and the rest of the lot. Marketing plays an important role in this industry and by naming a car LaPuta (“the whore” in Spanish) like Mazda did, no wonder that it was an epic failure for the Japanese automaker.

Manufactured between 1978 and 1987, the Subaru Brat is not only a car with an ugly name, but it also has one of the most awful designs we’ve seen from Subie. Brat stands for “bi-drive recreational all-terrain transporter.” Think of the car as a Japanese version of the El Camino. Despite its awful name, the car was pretty good thanks to its all-wheel drive capabilities. But let’s face it; wouldn’t you be embarrassed if someone asked you what car you drive?

Oldsmobile launched the Intrigue in 1998 and discontinued it four years later. It was a front-wheel drive mid-size sedan, but there was nothing intriguing about it. It was developed for passionless and boring people, featuring a very dull design, making it perfect for a rental car and we all know that rental cars are anything but intriguing. 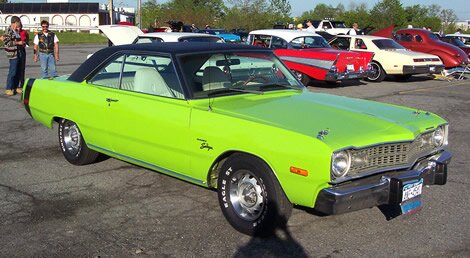 The Dodge Swinger was launched in ’69 (obviously) so we have to understand the automaker for giving the car this name. Aside from its rather embarrassing name, the car was pretty awful. It was in fact a two-door version of the Dodge Dart, another automotive “masterpiece”. 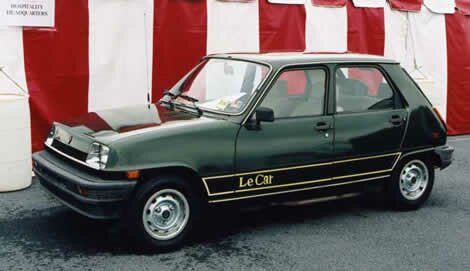 The North American version of the Renault 5 was called “LeCar”. I don’t understand why the French automaker decided to change the car’s name when it took it stateside. Nothing is wrong with an alphanumeric car name and you’ll rarely see one in top 10s like this one. Even worse than that are the oversized “Le Car” decals on the doors. 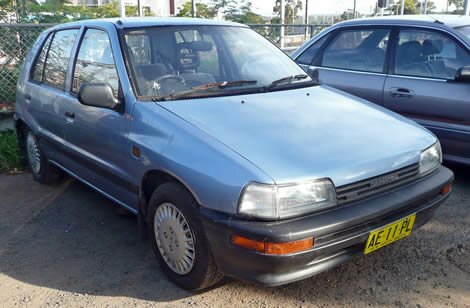 It really was a charade with its cheap looks, uncompetitive price. No wonder they sold only a few units between 1988 and 1992, despite being under the guidance of Toyota. 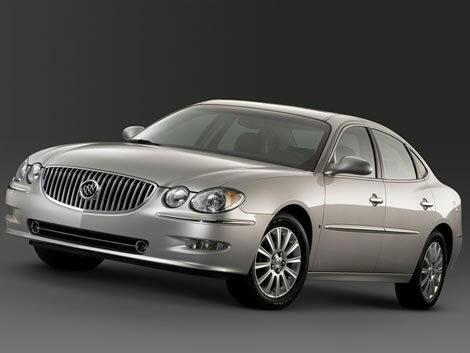 If you didn’t know, “LaCrosse” is a unique French word that means “a teenage masturbator”. Maybe they meant to say “la crosse” rather than “lacrosse”. No wonder Buick sold only a couple of units in French-speaking Quebec. In addition, this also can be translated “to trick someone”, yet another unfortunate meaning. 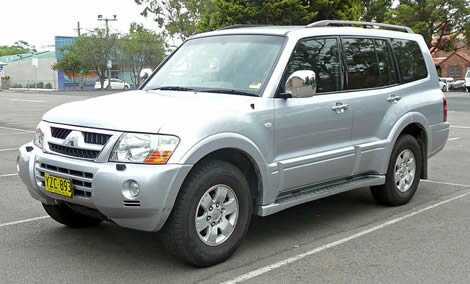 “Pajero” is a Spanish slang for the word “wanker”. However, Mitsubishi was clever enough to give the car a different name when it brought it in Spain as they named it “Montero”.  However, there are lots of Spanish-speaking drivers that own a wanker which is pretty funny if you think about it. 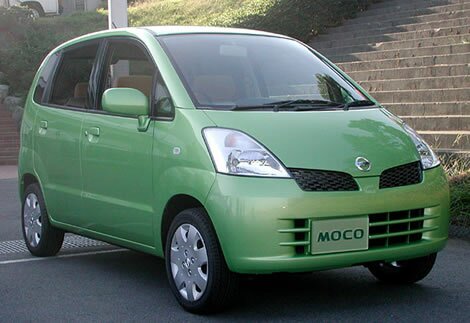 Nissan made a very good decision not to bring the car in Spain as it would have been an embarrassing thing to do, taking into consideration that “moco” there means snot or booger. Luckily, Nissan sold the car only in Japan. 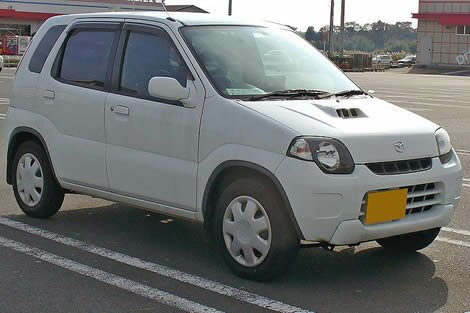 We mentioned this one in the first paragraph so it “deserves” its own place in the top. It was a great little car, excellent for city driving. Mazda launched it in 1999 and manufactured it for seven years, the model being discontinued in 2006. The company chose this name after Jonathan Swift’s “Gulliver’s Travels”. However, “la puta” in Spanish means prostitute.

Back in the 1980s, Ford was about to transform its iconic Mustang in a V8-free, FWD model, co-developed with Mazda. They changed their mind after fans of the pony car got angry at the prospect of a car totally different from what they were used to. However, Ford released a model that at first they wanted to be the new Mustang. It did not take very long after the car was launched to think of the word “probe” and its multitude of connotations, including the embarrassing one of course.

Although this is terrible news for some people, it shouldn’t come as a surprise taking into consideration that since 2008, the European sales of Daihatsu cars have plummeted by 33% to only 19,300 cars in 2010. The most successful year for Daihatsu was 2007 when they managed to sell 58,600 units. 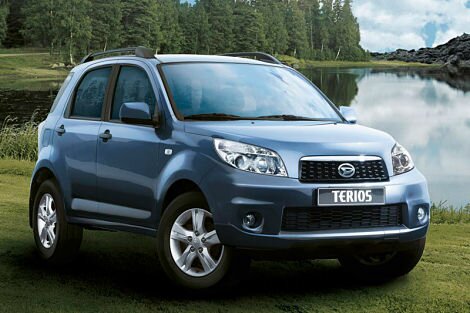 Despite the fact that the company will no longer sell cars in Europe, they said that after-sales support (including supply of spare parts) will not be affected by this decision so the ten countries in which the cars were sold will still continue to receive support.

Due to be introduced at the Tokyo Motor Show, here’s the Daihatsu Mud Master-C concept. And, my God, this car’s name is sooo funny! I mean, the first thing that crossed my mind was Bud Bundy’s nickname, Grand Master B. You must remember him, from the “Married with Children” series. But enough with the jokes on the poor Daihatsu and let’s see what this thing does.

Well, this car wants to be a small, tough transporter that features a hub reduction system, which transfers driving power via gears mounted between the drive shaft and wheel hub, 16 inch off-road tires and a simple interior with large-screen LCD multi-display and water-repellent seats. The body uses highly durable, lightweight and compact body-on-frame construction.