A very horrible bodykit is up for sale on eBay right now. We are talking about this Honda Civic Coupe-compatible kit that has been transformed by its owner to look more (or less) like a Bugatti Veyron 16.4. As you can see, the end result is pretty awful.

If you want to buy this “automotive masterpiece” you should be able to pay no less than $4,500 along with shipping taxes. Keep in mind that this price is only for the kit so you’ll need to pay extra for the car plus prepare to do a lot of work fitting this bodykit onto a mid 90s Civic Coupe.

We have some great news for those of you who are fans of the James Bond franchise as it seems that the legendary Aston Martin DB5 will be making a comeback when Skyfall which is the latest film of the series hits the cinemas on November 9th this year.

The DB5 has been the star of many James Bond movies, starting with 1964 hit Goldfinger, later on appearing in other JB movies like Thunderball, Casino Royale, Golden Eye and Tomorrow Never Dies. The big difference compared to those movies is that in Skyfall the Aston Martin will be seen in a full blown car chase.

A couple of years ago at an auction in London, the Aston Martin DB5 that appeared in Goldfinger was sold for 2.9 million pounds, but chances that in Skyfall we’ll see the same car are slim, even though it will be wearing the same BMT 216A license plate that the car had in Goldfinger.

With the launch of Skyfall, the James Bond franchise will be celebrating its 50th anniversary. James Bond will be played once again by Daniel Craig, while other actors include Ralph Fiennes, Judi Dench and Javier Bardem.

Mercedes-Benz UK teamed up with the well-known entertainment company Pioneer to develop a special version of the Vito model which is known as the Project-X. This showcase vehicle is a Vito 122CDI Sport-X Dualiner that is powered by a V6 3.0-liter diesel engine which generates 221 hp (224 PS / 165 kW) and a peak torque of 440 Nm.

The highlight of this car would have to be its impressive 25,000 pounds-worth Pioneer Sound Pressure Level in-car audio system which consists of two 15-inch competition-class SPL subs along with four 10-inch Champion Series subwoofer that should be able to provide  a powerful, clear and great bass response.

Also on board of this tricked out Vito are two Pioneer CDJs with an ultra-modern art mixer. There are eight independent amplifiers which use four batteries, along with a 300amp power supply, while the speaker power can handle an almost incredible 30,050 watts. 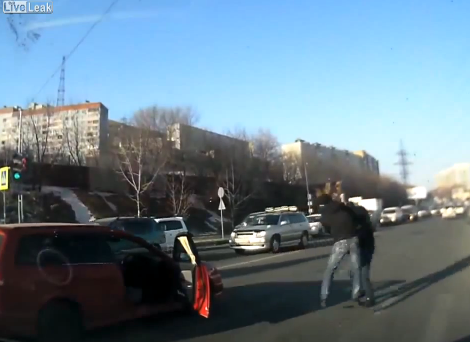 We have yet another video recorded in Russia. This time it is in the city of Vladivostok on a pedestrian crossing. The person is crossing the road on a red light and upsets the guy in the red car. The latter gets out of his car and start a fight with the pedestrian. See what happens.

PS: Check out the dog.

Best gas station in the world? 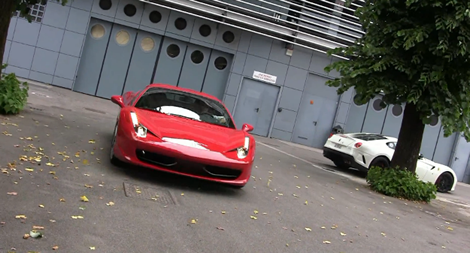 There isn’t anything special that you could say about a regular gas station, mostly because all of them are the same. However, the exception would have to be this one which is strategically located less than 100 meters away from the paddock of the famous Monza circuit. When the racetrack is open, this would have to be the best gas station in the world where you have the possibility to admire all sorts of supercars that come to fill their tanks.

As you can see from this video, on the day of the recording there were a lot of Ferraris waiting in line for a refill. These are the cars captured by the camera: Ferrari 599 GTO / GTB / HGTE, Ferrari 458 Italia, Ferrari 430 Scuderia, Ferrari F430 Coupe / Spider, Ferrari 360 Modena and a Ferrari California.

360-degree flip in a Chevrolet Sonic 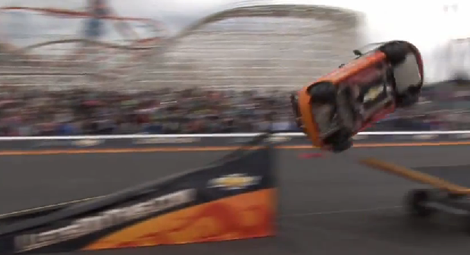 General Motors came up with a brilliant idea for promoting the new Chevrolet Sonic subcompact. They’ve teamed up with professional skateboarder Rob Dyrdek who swapped his usual four-wheel plywood for a 5-door Sonic in order to perform a 360-degree “kickflip”. There were two 50-foot ramps, one to launch off the car and another one to land it. Between these two ramps there was a massive skateboard.

This advertising scheme was part of the automaker’s “Let’s do this” campaign for the funky hatchback and it follows the previous “Sonic Skydive” where the car was parachuted from a plane at an altitude of 14,000 ft. Part of this campaign was also the “Sonic Bungee Jump” where the vehicle was launched from a 100-ft tower while it was tied to an elastic bungee cord. 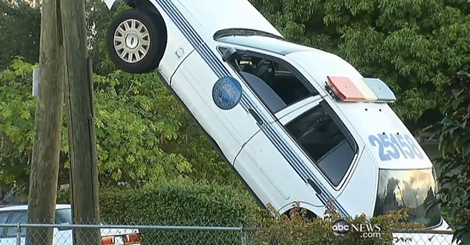 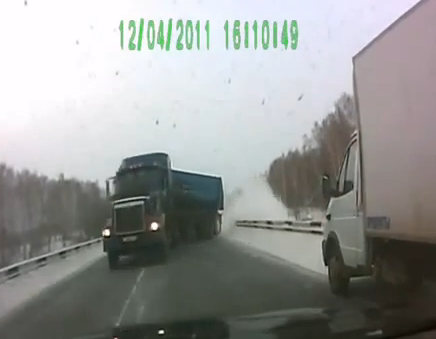 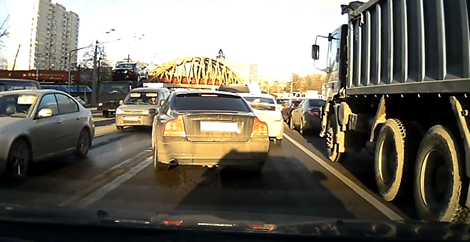 The video you are about to see comes from Russia where a dashboard-mounted camera manages to capture a live robbery that reminds us of the popular video game Grand Theft Auto. The one-minute clip starts with a black Volvo S80 driving agonizingly slow on a modern jammed road in Moscow, Russia. Soon as the cars in front stop, the driver of the Swedish vehicle pulls it diagonally on the road and soon after that three men wearing black clothes jump instantly from the car.

Several seconds later, these three men return to the Volvo and it appears that two of them are holding some goods in their hands. Once the three are in, the driver steps on the gas pedal and hits several cars in his attempt of evading the crime scene.

PS: The date of the clip is wrong because the incident took place on December 6th this year. 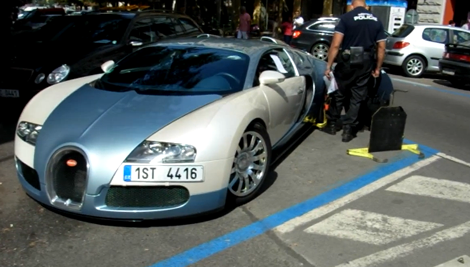 It goes to show that having a lot of money doesn’t mean that you don’t have to play by the rules. The wealthy owner of this Bugatti Veyron 16.4 was probably in a hurry or he just didn’t care when he parked his car illegally. The Czech police officers did not care that the car had a Bugatti badge on it and clamped the French hypercar without any hesitations. As you’ll see, that standard boot lock is no match for the car’s huge rear tire.

The amount of money that the Veyron owner will pay for the gas on its way to the police station is probably higher than the cost of the fine, but we’re sure that the owner of the Bugatti has deep pockets. 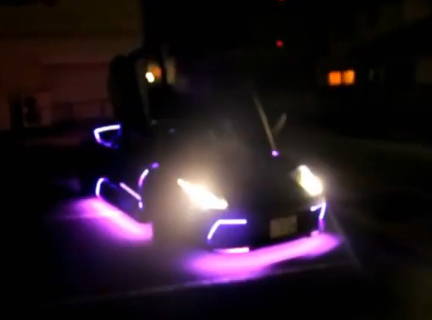 It was only on Monday when we showed you a Ferrari 360 Spider armed with a lot of LED lights. Without further introductions, we have another one for you, a Lamborghini Murcielago whose owner probably is a Tron enthusiast. As you will see, it has LEDs just about anywhere, starting with the doors, windshield surround, engine vents, rear diffuser, etc. See for yourselves: 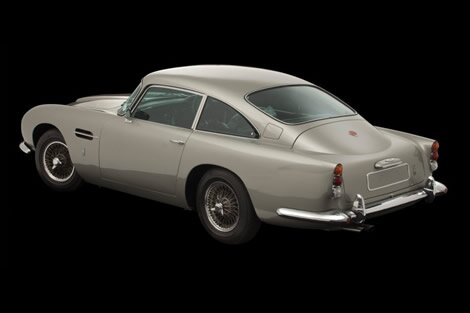 Last Wednesday at an auction in London, a superb Aston Martin DB5 from 1965 that belonged to George Harrison managed to fetch $549,553. The car was won by an unidentified Beatles fan from Houston, Texas. The organizers of the auction mentioned that the vehicle went for approximately $235,000 over its estimate.

The Aston Martin DB5 in question is wearing a platinum silver finish and has an elegant black Connolly leather interior along with chrome wire wheels. According to the auction house, the car was built in late 1964 and it has been driven for only 22,000 miles, and it hasn’t shown any signs of “major mechanical maladies.” 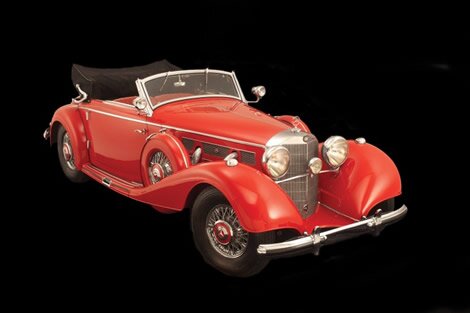 At the same auction, a rare Mercedes-Benz 540K that once belonged to F1’s boss Bernie Ecclestone was sold for a whopping $1.3 million. 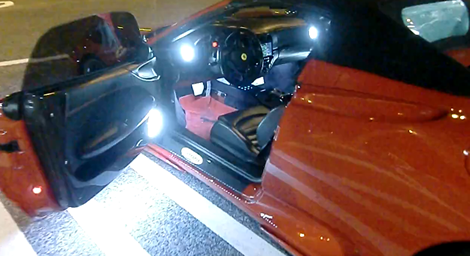 What you will see in the following video is a nice Ferrari 360 Spider that unfortunately has a really terrible owner. This “bright” creation features so many flashing lights that it could very well be used as a Christmas decoration. Let’s just hope that after the holidays the owner will bring the car to how it was before he “tuned” it.

Parking a car, no matter what! 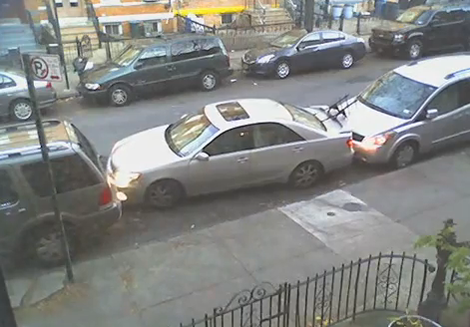 If you live in a large city, you know how difficult it is to find a parking space in the middle of the day. I remember seeing an episode from Seinfeld where George’s father didn’t want to take the car for a drive because he parked it in a good spot. That was a joke of course but the situation with free parking spaces is a real issue, regardless of the city.

Anyway, this isn’t an excuse to do what this driver of an old-gen Toyota Camry has done while trying to park his vehicle. He really didn’t care about the cars behind and in front of him; he just wanted to park his Camry, no matter what. Of course, he didn’t just scratch those two cars, he also scratched his, but his main purpose was to find a parking space. Well, he did. 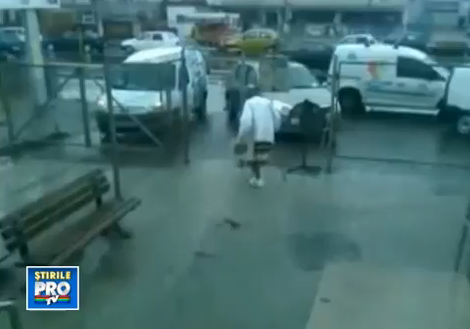 Today we have a funny yet worrying video coming from Romania where apparently this 80-year-old (at least) woman is driving a Dacia Sandero. According to a local website, the woman was involved in an accident and she was heading to her car, after leaving the police station. As you can see from this video, she can barely walk, let alone drive a car. It goes to show who crazy some people are, allowing a person like this to drive a car, not thinking about the consequences.