Limited to only 150 units, the SsangYong Korando LE is a special edition of the Volkswagen Tiguan-sized SUV and brings additional goodies as standard. In addition, it is offered with a new finance deal and 5-years free services. The car is available in Space Black, Vitamin Red and Grand White exterior color finishes.

The only engine offered for this version is a 2.0-liter diesel unit that pumps out 173 hp and has CO2 emissions of 157 g/km. It comes with a bunch of goodies like 18-inch alloys, privacy glass and a rear spoiler on the exterior, while inside it packs cruise control, heated front seats, parking sensors and leather-wrapped gearlever and steering wheel.

The car costs 17,995 pounds while the 4.5% APR finance deal is based on 60-month payments of 259 pounds with a deposit of 3,744.78 pounds. Those who opt for this version of the Korando also get a 5-year unlimited mileage warranty and also five years of free servicing. 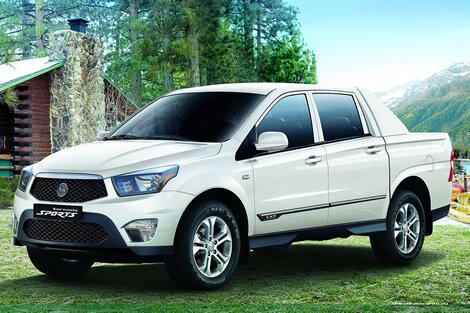 Remember the SUT 1 Concept that Ssangyong launched in 2011 at the Geneva Motor Show? Well, this Korando Sports is the production version of that concept and it has arrived in South Korea where it replaces the Actyon Sports.

Ssangyong says that this new model is an LUV – leisure utility vehicle, but essentially we are dealing with a 4-door sport utility vehicle that has a pickup truck bed. The car looks significantly more conventional (and better) than the Musso Sports from 2002 and the aforementioned Actyon Sports from 2006.

One of the many concepts that were revealed this week during the Frankfurt Motor Show is this SsangYong XIV-1. The car measures 4,140 mm in length, 1,830 in width and it is 1,590 mm tall, while the wheelbase is 2,600 mm. One of the cool features of this concept would have to be the opposite-opening rear doors that look great.

The car is motivated by a 1.6-liter gasoline engine or a 1.6-liter diesel, but unfortunately we don’t have any details about the specifications of these power units. We do know that SsangYong is seriously thinking about rolling out a production version out of this concept which should go head-to-head with other cars in the CUV segment, like the Land Rover Evoque.

Next month SsangYong will come back in the United Kingdom market with the all-new Korando crossover, a car that has nothing in common with the older generation that it replaces. The automaker is owned by the Indian conglomerate Mahindra & Mahindra and with this new crossover they plan on stealing customers away from the funky (and my personal favorite) Nissan Qashqai, the Mitsubishi ASX, Kia Sportage and Hyundai’s ix35 model. They hope to do that with the attractive starting price of only 16,995 pounds.

The new generation of the Korando is based on the C200 Aero Concept that we saw back in 2009, a concept created by Giorgetto Giugiaro’s ItalDesign. Under the hood it will come with a 2.0-liter turbodiesel engine that produces 175 hp and has a maximum torque of 360 Nm. CO2 emissions will stand at 157 grams of CO2 / km and the car will be available for order in FWD or AWD configurations, along with a 6-speed manual gearbox or an automatic transmission.

Those who are interested in this model will be able to get it in one of the three trim levels available: S and ES which will come with a manual gearbox and the top-spec EX that features an automatic transmission.  The AWD version is going to be available only on the aforementioned EX trim level. 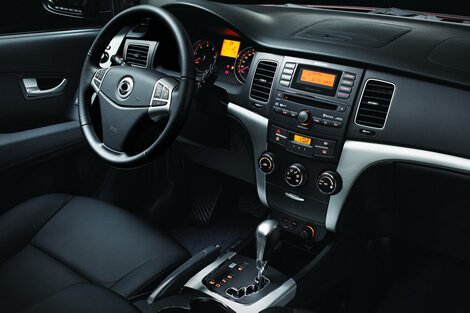 Some of the standard goodies that come with this SsangYong Korando include the reverse parking sensors, cruise control, Hill Start Assist and ESP.

The SsangYong Rodius has to be the ugliest MPV ever made. With those dopey eyes and the two-tiered rear, no wonder it was voted Britain’s ugliest car. I don’t think that this is a car safe for your kids because after a ride in it, they’ll definitely have nightmares for a couple of weeks.

The idea behind this grotesque design was to capture the “essence of a luxury yacht” so my question is: why didn’t they tow it to the sea and leave it there? The guy responsible for these horrible looks is Ken Greenley, former head of the automotive design course at the famous Royal College of Art in London. With all due respect for Ken, he must have been drunk or temporarily blind when he came up with the design for the Rodius.

Leaving the looks aside, the car is not bad at all, featuring Mercedes-Benz engines and an 11-seat layout optional, making it probably the most spacious MPV in the world. It was pretty cheap also, but when you buy a car, you don’t look only at the spec sheet…

This car reminds us of the Pontiac Aztek, another “beauty”.

Can’t Afford A Mercedes? Get A SsangYong Chairman H, Or Not…

Lately we’ve been hearing a lot from the Korean manufacturer SsangYong. Back in February they’ve revealed the quite nice SUT1 pickup truck and last month we’ve learned that Mahindra & Mahindra bought the company and is now running the show. Just a few days ago they’ve unveiled a pretty interesting concept, the KEV2.
END_OF_DOCUMENT_TOKEN_TO_BE_REPLACED

The South Korean automaker Ssangyong will unveil today a new concept car at the 2011 edition of the Seoul International Motor Show. Dubbed Ssangyong KEV2 Concept, it is going to be the electric version of the Korando crossover model.

Although at this moment we don’t have any official information about the car, these rendered images are official and said to resemble what the concept will look like. It is very easy to figure out that this is an EV as there is no radiator grille in the front. The car’s front fascia will sport an array of slim line LEDs, very stylish if you ask me.

As far as the cabin is concerned, the KEV2 Concept will benefit from a modern layout, featuring a Samsung Galaxy Tab tablet as the central console interface while the passengers in the back are spoiled by a couple of LCD touchscreen.

As a reminder, Mahindra & Mahindra recently acquired SsangYong and during this month’s Geneva Motor Show, the automaker showcased the SUT-1 Concept, a sleek pick-up truck that will go into production in 2012.

The Indian industrial giant Mahindra & Mahindra has announced yesterday that they have completed the acquisition of a majority stake in the South Korea-based SsangYong Motor Company. This deal also signals the fact that SsangYong is no longer in court receivership. Back in August last year, Mahindra won the bid for the troubled Korean automaker.

The first results of this acquisition will be seen when the Korando-C and Rexton models will make an appearance in the Chinese market. The president of Mahindra & Mahindra said that “Ssang Yong will be an independently run Korean company – with largely Korean Management – and will remain a “Made in Korea” brand”. The CEO of SsangYong is now Yoo-il Lee, while the CFO is Dilip Sundaram.

Mahindra affirmed that it has proposed a 70% investment increase in the development of new products (compared to last year) for the Korean automaker in 2011.

If you remember, at the beginning of this week we’ve talked about SsangYong’s new SUT-1 Concept that was unveiled in Geneva, a model that previews a pick-up truck the company will start selling next year.

The Korean automaker SsangYong revealed yesterday the first details and images of their SUT 1 concept that will have its public debut this March at the 2011 Geneva Motor Show. This concept is a stylish pickup truck which will most likely transform into a production model in the months to come.

Most likely, the production version of the SUT1 will be available with either a 6-speed manual gearbox or with an automatic transmission. In addition, it will be offered in both 2WD and 4WD versions.

The production model will most likely be available in the first months of next year at a yet undisclosed price tag.

Frankly, I don’t see the point of a stylish pickup truck, but I’m sure there’s a niche for everything.

Ssangyong has escaped liquidation, will move forward with revival plan


It seems that South Korean carmaker Ssangyong will avoid entering into liquidation, as a court in its native country has finally approved its revival plan, meaning that it will avoid the worse case scenario of closing its doors and selling off its assets.

As you may remember, the South Korean company, which specialized in SUVs, has been through a lot of difficult things in the last year, with investors bailing out on it and workers going on huge strikes in order to prevent job cutting.

After this great piece of news for Ssangyong, it seems that the revival plan the company has presented will go into full effect, and will once again make it profitable. The new C200 crossover will reportedly lead the way at the beginning of next year when it will finally be launched. The new crossover was expected to be revealed at the Frankfurt Motor Show, but due to the financial turmoil, it was postponed.

END_OF_DOCUMENT_TOKEN_TO_BE_REPLACED


Perhaps some of you might have hear about Volkswagen, which currently owns brands like Audi, Bugatti, Bentley, Seat or even Lamborghini. But it seems that the leader of the large corporation, Ferdinand Piech, isn’t content with all of these groups under his umbrella and is eying South Korean SUV maker Ssangyong.

Yes, you read right, Ssangyong, the corporation which is now in bankruptcy and under some severe cost cutting measures, might be purchased by one of the biggest automakers in the world. A big part of the motivation behind Piech’s actions relate to the plants that Ssangyong owns, which can produce around 250,000 cars per year, and which might be modified to produce other models from the VW corporation, right in the Asian continent. Also, unbeknown to many Europeans is that Ssangyong currently owns and is developing plenty of new electric technologies, thanks to the big industry segment of South Korea.

The new purchase seemingly has all of the right attributes to take place as the current owner of Ssangyong, SAIC, revealed that it doesn’t want to take helm of the South Korean manufacturer once more without a reliable partner, and guess who currently has no obligations? Yeah, Volkswagen.

All we can do though is wait and see if this transaction will actually take place or if VW will target another Asian automaker.