Audi Q3 by ABT Revealed 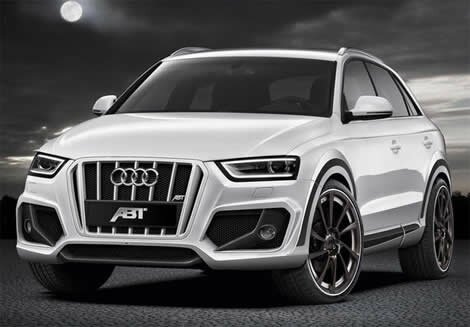 The German tuners from ABT Sportsline have revealed this week their aftermarket program for the Q3, Audi’s baby SUV. In the aerodynamics area, as you can see it comes with a brand new front skirt and grille, along with updated side skirts and a rear bumper that incorporates exhaust pipes plus a roof wing.

If you own the Audi Q3 fitted with the 2.0 TDI engine, the tuners can offer you two power upgrades: one for the unit that produces 140 hp which they can raise the output to 170 hp and the other one for the more powerful 177 hp unit, which gets its power lifted to 195 hp.

Aside from the aesthetic changes and the upgrades under the hood, ABT can install new suspension springs, sports tires as well as 18- or 20-inch light alloys.

The tuner didn’t release any details regarding the price list for this upgrade program available for the Audi Q3.

Source: ABT Sportsline via ZerCustoms 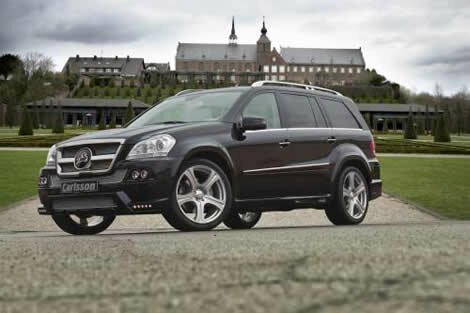 Carlsson decided that the Grand Edition of the Mercedes GL isn’t “grand” enough so they’ve come up with this CGL45 model that will make its official debut at the upcoming Frankfurt Motor Show which will open its doors next month.

As you can see, the GL has been fitted with massive flared wheel arches, a chrome grille, a fresh new front spoiler; those LED daytime running lights fitted in the front spoiler lip while looking at the car’s back we notice a new apron and stainless steel exhaust system that has an oval quad-pipe configuration.

In addition, the Mercedes-Benz GL Grand Edition can be lowered by 30 mm thanks to the intelligent suspension-lowering system and the car can get 22-inch alloys that have a 1/5 Brilliant Edition design and are covered in high-performance rubber that measure 305/35ZR22 on all four corners.

Inside the cabin, the CGL45 comes with Alcantara and leather upholstery, along with stainless steel and wood trims, Carlsson-badged door sills, aluminum foot pedals. On the headrests, you’ll find the logo of the tuner.

BMW 1-Series M, Put On A Diet By RevoZport

The tuners from RevoZport have though that the stock BMW 1-Series M is a little bit too fat and for this reason they’ve come up with this 1M Raze that manages to shave off 132 lbs (60 kg) from the car’s total weight. This vehicle has been designed not only to be lighter than the original model, but more aerodynamic as well. 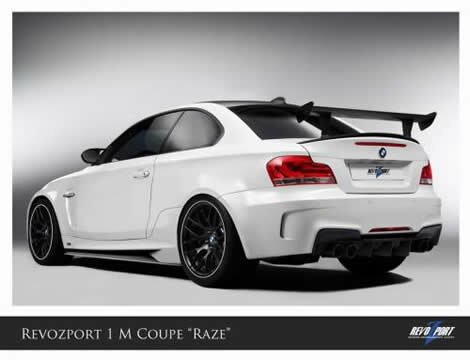 Here are a couple of price tags for some of the modifications available: the front grille costs $250, the ventilated bonnet $1,290, front splitter is $900, lightweight trunk is between $600 and $1,190, the trunk-mounted spoiler will set you back $780, that lightweight roof is another $1,500, while the mirror casings cost $290 and the rear diffuser is $780. The price for the rear wing and the side skirts will be announced in the near future.

As for the performance of the engine, RevoZport throws in an intercooler, along with high-flow air filters, a blow-off valve charge pipe, a titanium exhaust system and a remapped ECU. No words about the power output of the engine but taking into consideration the P450 designation, the engine might produce 450 hp (456 PS / 336 kW). 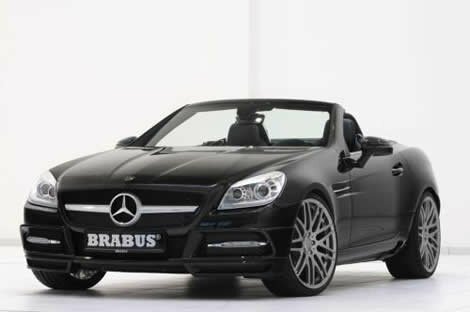 You all know how Brabus has a soft spot for Mercedes and it shouldn’t come as a surprise that their latest project is based on the sexy SLK. Design-wise, they’ve come up with a new front lip spoiler and a whole bunch of wheels that are available in sizes from 17 to 19 inches. At the back, they can fit your SLK with a trunk-mounted spoiler, a four-tailpipe sport exhaust system and a diffuser. In addition, they’ll also throw in a suspension lowering kit that brings your car closer to the ground by 30 mm. Inside the cabin, you can order aluminum pedals, Alcantara or Mastik leather, along with stainless steel scuff plates. 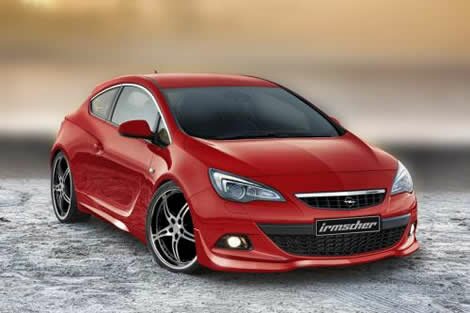 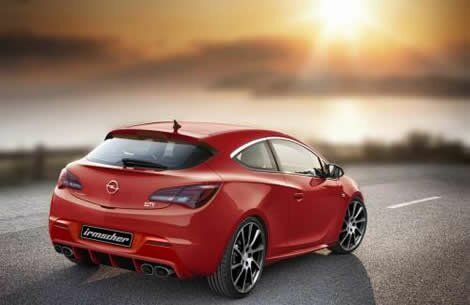 As you can see, they’ve also come up with a more aggressive body kit, installing a new front grill, a roof spoiler as well as a rear diffuser that incorporates an elliptical quad exhaust. In addition, they’ll also lower your car by 30mm by installing a suspension kit and can install 21-inch alloys that have 245-sized tires.

For the inside cabin, Irmscher adds aluminum pedals and lots of fine leather to make the cruising more comfortable. 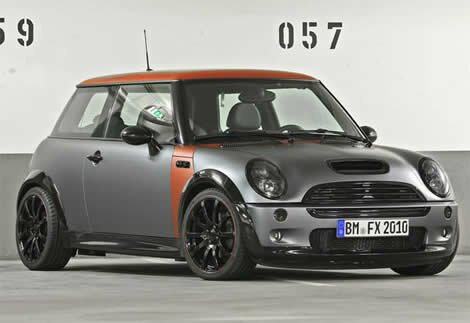 The vinyl wrap professionals from CoverEFX revealed last week a styling program for the Mini Cooper S. They named it the MINI R53 Project One and aside from the visual updates that you can easily see, they also played a little bit with the car’s engine, increasing the horsepower figure and raising the torque as well. 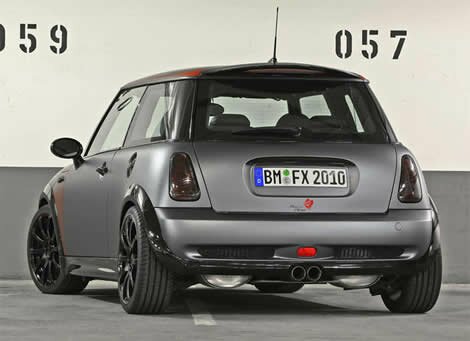 With the help of the engineers from MR Car Design, they lifted the output of the engine to 240 hp, modifying the turbocharger and remapping the ECU. As you can see, the car rides on 17-inch alloys, dubbed Emotion Wheels and is finished with a two-tone vinyl wrap in teflon gray metallic mixed up with electro red metallic. They also installed smoked headlights and got rid of all the badges. 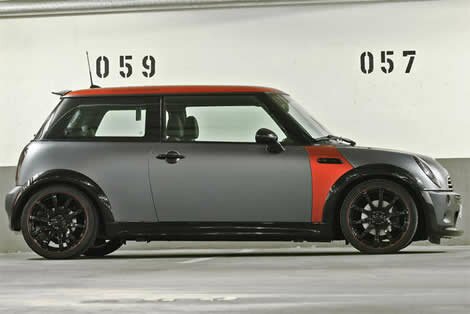 How much you ask? Well, a little bit steep if you ask us as CoverEFX charges for this upgrade program 8,000 Euros! 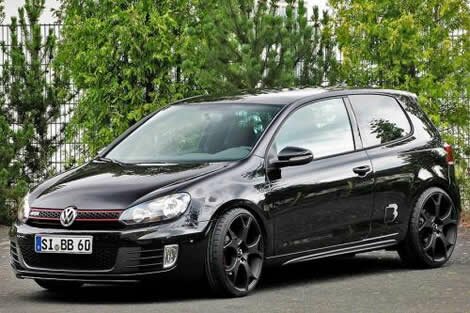 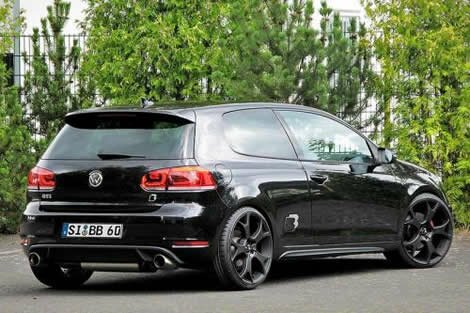 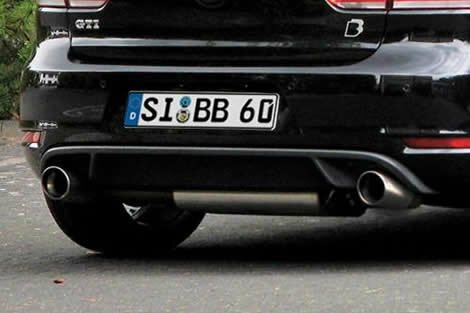 Aside from this extra oomph under the hood, the tuner also adds bigger brakes, a suspension lowering kit that brings the car closer to the ground by 30 mm, along with either 19- or 20-inch rims. 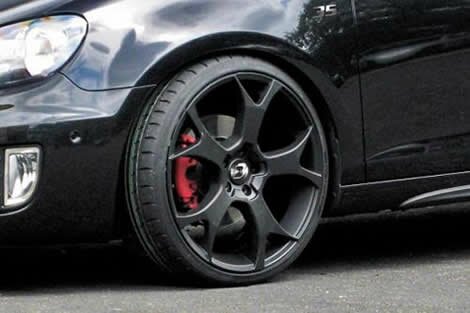 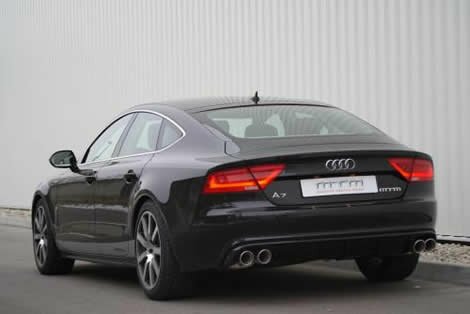 The V-Max is now 263 km/h and for 2,600 Euros you can get a performance exhaust system that features 89 mm quad-piped ends. Aside from these goodies, MTM also throws in a sport suspension, along with 20 inch Bimoto alloys. 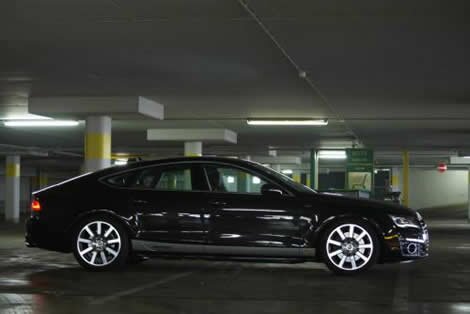 VW Tiguan By Abt Sportline Revealed 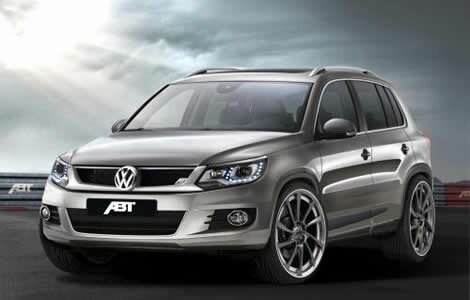 VW Tiguan facelift by Abt Sportline

The tuners from Abt Sportline have developed an upgrade program for the facelift version of the VW Tiguan that comes with a new honeycomb grill, a tailgate-mounted spoiler and a rear bumper insert. They also offer a suspension lowering kit that reduces the car’s height by 20 mm, along with a wide selection of 18- to 20-inch alloys.

VW Tiguan facelift by Abt Sportline

Source: Abt Sportline via WCF

Cosa Design is a tuner from Germany and their latest project is based on the sexy Lamborghini Gallardo. Unfortunately, what they did is they took a very beautiful car and turned it into a hideous thing. That new bodykit that comes with a front skirt, rear apron, rear wing, rear diffuser and new side skirts is perhaps one of the ugliest ones we’ve ever seen for the Gallardo, especially if you look at the car’s rear.

Aside from these aesthetic changes, they installed a stainless steel exhaust system that provides an additional 20 PS in comparison to the standard Gallardo. The total output of the engine is 533 hp (540 PS / 397 kW) while the peak torque is 406 lb.-ft (550 Nm). The maximum speed has been raised to 197 mph (317 km/h).

It also comes with a coilover suspension kit that has adjustable rigidity and height while the brand new brakes have 6- and 8-piston calipers. The car now rides on 9.5 x 20-inch wheels at the front wrapped around in 245/30R20 tires while at the back it has 11 x 20-inch alloys with 295/25R20 Continental Sport Contact tires.

They also installed a brand new stainless steel exhaust system that sports twin 90 mm tailpipes while the maximum speed has been lifted to 174 mph (280 km/h). As far as the suspension goes, they’ve fitted the A7 with a lowering kit while the rims are Varianza T1S that measure 9.5 x 20-inch, covered by the 275/35R20 rubber. 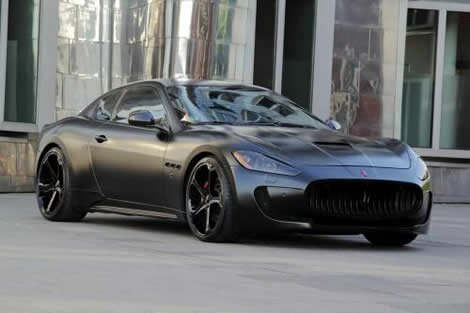 The German tuners from Anderson Germany have decided to take the beautiful Maserati GranTurismo S and wrap it around in a silky matte black skin that has several shining highlights as well as tinted head- and taillamps. Dubbed the Superior Black Edition, this sports coupe features a brand new carbon fiber bodykit that includes a new hood, revised side mirrors, an updated tailgate as well as new roof ledges, side air inlets and both new front and rear aprons.

It wouldn’t be a proper tuning program if it didn’t include some changes under the bonnet where the V8 4.7-liter engine of the GranTurismo S has been modified in order to output 485 hp (492 PS / 362 kW), up from the standard 434 hp (440 PS / 324 kW). The car now rides on 21-inch black-painted rims that have been covered by the 265 tires for the front wheels and 295 rubber for the ones in the back. It also comes with a stainless steel exhaust system and a suspension lowering kit. 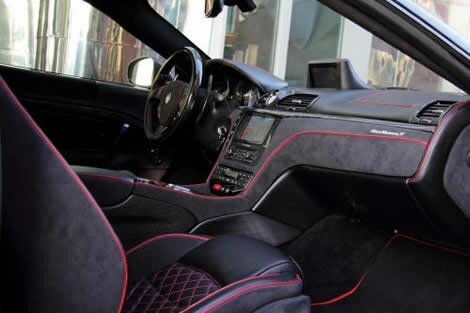 As far as the inside cabin is concerned, you’ll find a carbon theme combined with the black-carbon leather and black Alcantara, along with red stitching and seams. 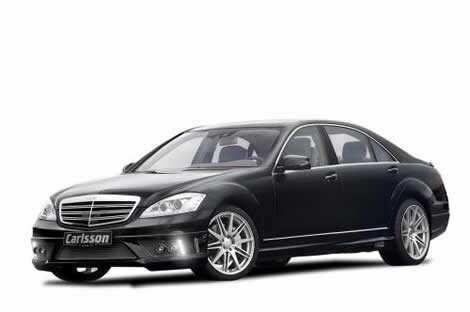 The latest tuning program developed by Carlsson is for the Mercedes-Benz S-Class (W221) and as you can see from these pictures it comes with a new design of the front bumper, more aerodynamic side skirts, updated rear apron as well as a trunk-mounted spoiler. In addition, they also installed a suspension lowering module that brings the car closer to the ground by up to 30 mm, along with 20-inch alloys wrapped around in high performance Dunlop rubber.

They also did a number of updates to the massive twin-turbo V12 5.5-liter engine by installing a high-flow air filter; remapping the ECU and fitting a stainless steel sport exhaust system. After these modifications, the power unit is able to output 591 hp (600 PS / 441 kW) and a peak torque of 755 lb.-ft (1024 Nm) which is electronically limited. 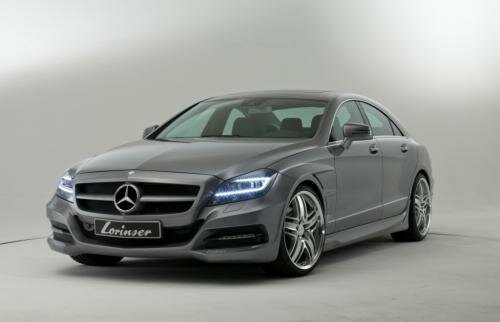 The German tuners over at Lorinser have managed to take one of the most beautiful cars on sale today and turn it into an even more exquisite automobile.  They took the Mercedes-Benz CLS and created a new aerodynamic package that consists of a much more attractive front spoiler, wider wings, and more aggressive side skirts, along with a new rear lip, rear skirt and a roof spoiler. This entire bodykit costs 8,230 Euros.

Other goodies that they can offer for the sexy CLS include a stainless steel sport exhaust system that has an imposing quad pipe configuration, various designs for the 19- or 20-inch alloys, along with new suspension springs that bring the four-door coupe closer to the ground by 25 mm at each axle. 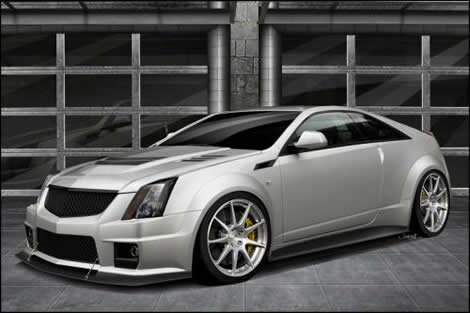 We haven’t seen a tuning program for the Cadillac CTS-V Coupe for a while now but things are about to change as Hennessey has just revealed a performance package for this model. Wearing the “V1000” designation, their version of the car comes with an aerodynamic carbon fiber body kit that features a ventilated bonnet, front splitter, along with aggressive side skirts and a rear diffuser.

Other goodies included in this package would have to be the Brembo carbon ceramic brakes, a lowered sport suspension as well as a bespoke interior cabin that features an Alcantara headliner and premium leather upholstery. 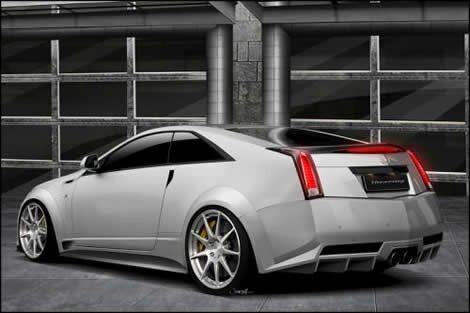 The main highlight of this tuning program can be found in the twin-turbo 427 LS V8 engine which has been fitted with brand new high-flow cylinder heads, better fuel injectors, new crankshaft, an updated ECU and an upgraded intercooler. Thanks to these major modifications, Hennessey managed to squeeze 1,000 hp (1,014 PS / 746 kW) and 950 lb.-ft (1,286 Nm) of torque from that engine.

No word about the price tag of this upgrade package for the Cadillac CTS-V Coupe but what we know is that the tuner will only roll out 12 units.