All around the world car auctions take place and are becoming more and more interesting and exciting these days offering good deals for amazing classic cars, but also for modern ones. All these car auctions are great places to find exotic classic cars and to admire some rare models manufactured in the past.

One of these amazing car auctions is the 2010 Mecum car auction which took place in Columbus. The event auctioned a collection of rare Corvettes belonging to Bob McDorman and also other classic vehicles and memorabilia. Bob McDorman was a well known Chevrolet dealer and during almost four decades he has collected a lot of incredible rare Corvettes including that owned by Bill and Florence Knudsen or the experimental 1964 model owned by Bill Mitchell.

This 2010 Columbus car auction displayed no more and no less than 150 classic cars including Corvettes from every model year manufactured between 1953 and 2009. As a result, every interested person could find his dream car. The number of people attending the event was impressive reaching 3,000 participants and more than 1,000 registered bidders. That’s why, the 2010 Mecum car auction was a real success with total sales of $7 millions, less than the estimated sale level of $9 million.

From the entire McDorman collection more than seven cars were sold for more than $100,000 each. The stars of this 2010 Columbus car auction were a pair of 1960 Corvettes owned by the famous auto executive “Bunkie” Knudsen and his wife. The 1963 Bunkie Knudson Convertible was painted in a unique shade of red and is equipped with a bright white racing stripe and powered by a 327 fuel injection engine. In the same time the Corvette owned by his wife is a coupe painted in a unique shade of pink pearl. It’s equipped with air conditioning, power windows and a 1965 block hood.  The two classic cars were sold for $400,000 and $280,000. Another interesting bid was that for the 1953 Corvette Roadster 235 CL which was sold for $131,000 while the 1955 Corvette Roadster brought $130,000. 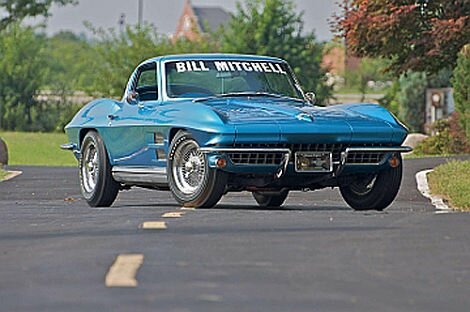 Another incredible classic car displayed at this 2010 Columbus car auction was the 2006 Chevrolet SSR Roadster. This car attracted the viewers because of its incredible exterior design and interior components and convinced its new owner to pay $109,000. The outstanding 1964 Chevrolet Corvette Coupe Bill Mitchell Experimental Sting Ray XX heated the spirits at the auction and in the end was sold for no more and no less than $160,000. This classic car is painted in a metallic blue color with blue leather interior and powered by a 327 engine with a three speed automatic transmission.The incredible 1989 Corvette convertible owned by Zora Duntov was another incredible bid at the 2010 Mecum car auction. It’s a celebrity car because Zora Duntov was the first Chief Engineer of Chevrolet and he is the one who established the Corvette’s way to build. This 1989 model is a Bright Red Convertible which is equipped with an automatic transmission and covered in red leather which matches with the red hardtop. This Corvette is unique because of the personal touches that Zora made on this car including the AOPA (Aircraft Owner and Pilot’s Association) sticker on the hardtop and his name wrote in gold on each door of the car.

This 2010 Columbus car auction was an exciting event and a good place to find incredible and rare Chevrolet Corvettes. If you didn’t have the opportunity to be part of this car auction you should try to go to the next Mecum car auction.