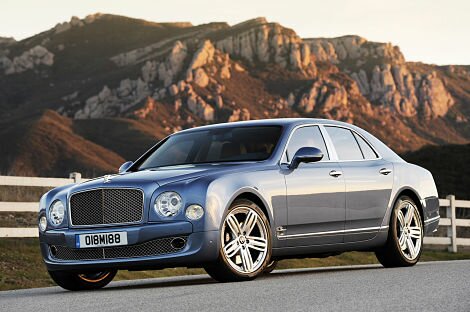 Tasked with making a new flagship that is capable of capturing the essence of the Bentley marquee – a high-end luxury automobile that is capable of taking down many of today’s sports cars – the designers and engineers in Crewe did their very best and created the 2011 Mulsanne. The electronics of the car manage every single aspect of the Mulsanne’s powerful V8 6.75-liter, from the ignition sequence to fuel delivery. Power on the engine and it whirls to life and after that you will get a near-silent idle.

The car you see in these pictures is the North American-spec Bentley Mulsanne that has Pale Sapphire paint and a Cashew interior with French Navy contrasting color. The starting price for the car is $285,000 without the $2,595 destination fee. The car pictured comes pre-loaded with a bundle of optional features, like the massive 21-inch Polished Sport Wheels that cost $6,315; the Seat Ventilation & Massage that cost extra $3,000; the Adaptive Cruise Control which adds another $3,270 to the final price tag; Burr Oak Veneer – $4,630; Naim Premium Audio – $7,415 and a Flying “B” Radiator Mascot. Add to all of these the Valet Key that costs $250 and the Ambient Interior Mood Lightning that adds another $390 and the final price tag of this high-end car is $330,195. 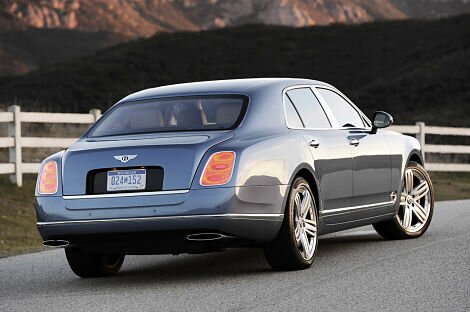 The 2011 Mulsanne has some of the best polished stainless steel door handles ever installed in a car and the insides have a special tactile knurling that delights your fingertips.  With the new model, the company reinstated its proprietary tanning process for the hides which means that the new Mulsanne benefits from an aromatic and rich leather balm which is quite different in comparison to what you find in other cars with “painted” leather interiors.

Being a true Bentley, the inside is both sumptuous and lavish, both passenger-pampering and driver-focused. The steering wheel of the car isn’t quite sculpted or meaty, but the grip of the leather, feel and texture is very smooth. The flagship model comes with 12-way power-operated heated and massaging seats that offer all the comfort you can get from a car’s seat. 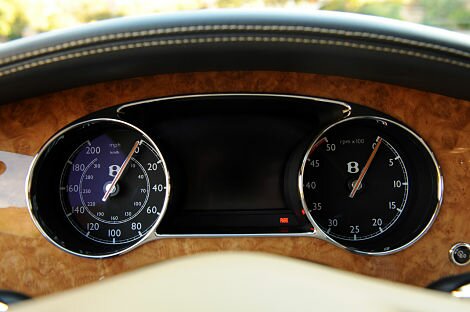 The primary instrumentation of the vehicle is quite clear, but the many smaller glass buttons located on the center console and the center stack require a little bit of familiarization. The car features an 8-inch high-resolution screen that is located behind a veneered panel installed in the center of the dashboard and is capable of displaying an easy-to-read version of Audi’s MMI (Multi Media Interface).

We all know that all Bentleys are designed mostly for the driver, but rest assured that the2011 Mulsanne offers all the comfort in the world for its passengers. The front one has the identical accommodations as the driver and the rear ones (2+1) benefit from 8-way power-operated heated and massaging seats with memory features and lumbar support. The car benefits from four individual zones of the climate control system and the passengers in the rear seats have the possibility to move the front-passenger seat out of the way (not that they don’t have plenty of leg room in the back). The multitude of controls is cleverly tucked out of the way inside the armrest that can be found in the rear center. 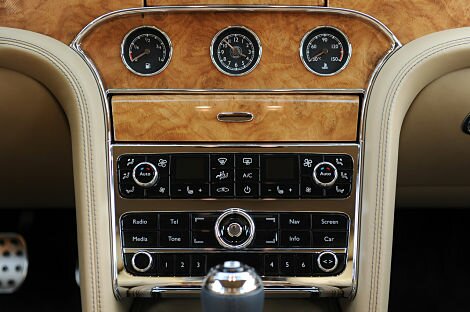 The engine that we have mentioned at the beginning of the article has been around since the 60s, and was installed in many Bentley and Rolls-Royce cars. During its 50 years of service, the power unit has received several updates and in this Mulsanne it has been entirely reworked and got a new forged camshaft, new connecting rods and new lightweight pistons. With these improvements, the power unit churns 505 hp @ 4,200 rpm and at only 1,750 rpm it can offer a torque of 752 pound-feet. This engine is linked to an 8-speed automatic gearbox developed by ZF that comes with paddles mounted on the steering wheel for those drivers that still want to switch gears manually. With this hardware configuration, the 2011 Bentley Mulsanne is capable of doing the 0-60 mph sprint in only 5.1 seconds, 0-100 mph in 11.6 seconds. With a curb weight of 5,700 pounds, the car is faster than a Porsche Cayman S which has half of the Bentley’s weight.

A premiere for a car in this segment is the variable displacement which means that the valves close in four of the cylinders in order to maximize fuel efficiency during normal cruising. Bentley’s are known to be driver’s cars so the Mulsanne is no exception to this rule and comes with a rotary switch for altering the suspension as well as the steering responses. The four driving modes available are: Bentley, Sport, Comfort and Custom. 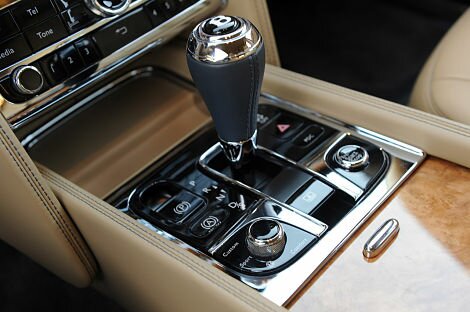 That heavy power under the hood must be stopped efficiently and for this reason the engineers at Bentley fitted the 2011 Mulsanne with massive brakes that measure 15.75 inches in the front with 6-piston calipers and 14.60 inches for the rear wheels with 2-piston calipers. The 21-inch optional rims we mentioned before are covered by 265/45ZR21 performance tires. When you stomp the brakes, the nose will drop as the weight is transferred forward.

Although it has a pretty considerable price tag, the 2011 Bentley Mulsanne is worth every single dollar, offering a great driving experience combined with all the comfort in the world. The steering is as smooth as it gets, the brakes are very efficient, and the interior cabin features some of the best and expensive materials available. Being a hand-crafted luxury sedan, the Mulsanne is a luxury automobile that perfectly blends the fun of driving with a bundle of comfort features for both the driver and the rest of the passengers. 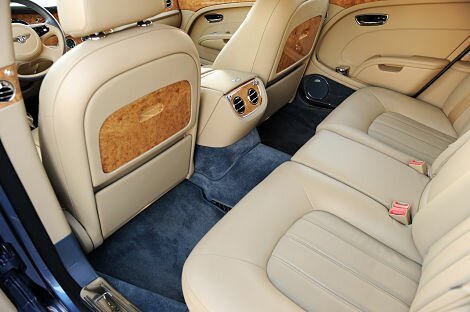 The 2011 Bentley Mulsanne can be described as a car faster than the Porsche Cayman S and with all the luxury features that you would expect from a car that belongs to the high-end luxury segment. Of course, all of these come at a very hefty price.