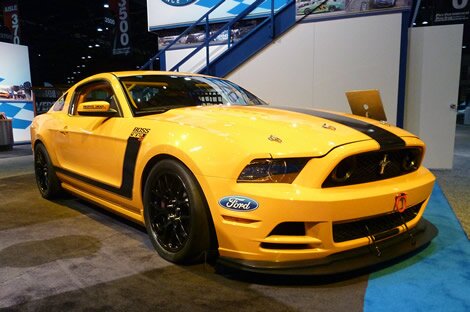 The Blue Oval company has unveiled a few days ago the Mustang Boss 302SX concept in Orlando, Florida at the Performance Racing Industry Show. The car is envisioned to be slotted between the Boss 302S and the Boss 302R, featuring a very aggressive front fascia, retro body stripes and a vented bonnet. It also has a Ford Racing exhaust, an adjustable rear wing and it rides on 18-inch rims wrapped around in racing tires.

Just as you would expect from an “ultimate track day car”, the interior cabin of this Ford Mustang Boss 302SX has been stripped of just about all of the equipment. It has only one Recaro seat, a data logger, a quick-release steering wheel and a FIA-compliant roll cage.

The car is motivated by a V8 5.0-liter engine that develops more than 500 hp (507 PS / 373 kW) and comes with tubular rear lower control arms and an adjustable coilover suspension.