The Hemmings classic car magazine is the oldest and largest car publication printed in the USA. The number of copies that are sold every month usually reaches easily 215,000. The most popular feature of this magazine is its large classified advertising section.

Looking through the pages of the Hemmings classic car magazine you can find information about every notable seller and classic car collector, such as Jay Leno and his well known Big Dog Garage. You can also read about the most known collector car clubs that exist all around the world and about their activity. Moreover, you can enjoy each month around 80 pages of editorial content that describes collector car shows and auctions that are organized all around the world, gorgeous classic cars, sports cars, prewar and historic racing cars. The information about family-type cars doesn’t lack either. 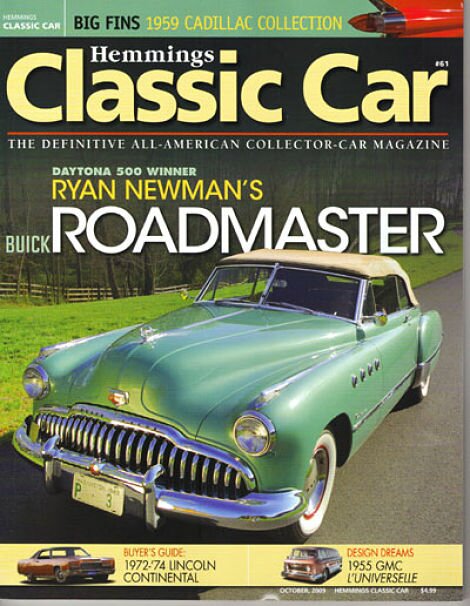 In addition to this, since 1970, the Hemmings classic car magazine started publishing a monthly publication called “Special Interest Autos” (SIA) that is dedicated to the American collectible cars. In 2000, the staff decided to start printing a muscle car and hotrod magazine and named it “Hemmings Rods and Performance”. This publication’s title was changed in 2003 when it was renamed “Hemmings Muscle Machines” but it continued to be published.

The SIA publication was taken off the car magazines market in 2004, shortly after the appearance of the Hemmings Muscle Machines. But the Hemmings classic car magazine staff didn’t stop here! It released another magazine that appeared the same year, in October and was called “Hemmings Classic Car”. This magazine is focused on the American collectable cars, all the stories being meant for collectors, owners, enthusiasts, dealers or restorers. The subjects approached in the magazine’s pages can be grouped in categories such as: “prewar cars”, “the pre-1916 Brass era cars”, “the postwar 1946-1960 American cars”, “the CCCA-recognized classic cars” or “the cars manufactured between 1960 and 1980”. The “Hemmings Classic Car” has a visual impact as well, because it contains incredible photos of cars that have been restored.

In 2005, the company published another interesting magazine which was specially designed for car collectors and car lovers that were interested in exotic and sports cars. The magazine received the suggestive title “Sports & Exotic Car” and contains information about classic cars built by foreign manufacturers. The release was a hit, because in 2008 it was considered the best sold US car magazine.

The Hemmings Company proved its interest in classic cars by printing calendars, signs, and other items regarding collectable cars as well. Moreover, they went the extra mile by organizing a public display located in Vermont, at their headquarters, where you can admire around 25 amazing classic cars.

Bottom line, the Hemmings classic car magazine is amazing and contains high quality articles and information about the classic car field. That’s why is the best car magazine in the USA and maybe in the entire world.