Hydrogen fuel cell vehicles – how do they work? 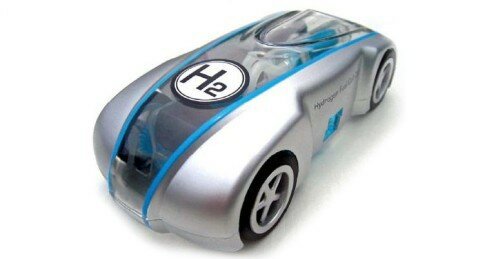 I’m sure most of you know that our current way of living relies heavily on fossil fuels, from the food we eat to the work we do or the things we use everyday. But I’m also quite certain that most of you know that fossil fuel reserves will one day come to an end. Don’t go thinking we’ll leave our grandchildren stuck solving that problem though, as scientists estimate the end of fossil fuel reserves (oil at least) to arrive as soon as 2025.

That’s why the automotive industry, one of the most reliant branches of the business on fossil fuels, is working hard to find new alternative means of powering vehicles and slowly but surely getting rid of our addiction to petrol, diesel or any such kind of fuel.

Hybrids and plug-in hybrids are becoming major trends these days (just look at the 2010 Geneva Motor Show which is filled with such concepts or production cars). But another means of propulsion is also looking very good in the eyes of the public: hydrogen fuel cell vehicles.

But as it gains more and more influence, few people actually know the whole story about such cars, trucks, buses or anything in between. That’s why we decided to explain just how hydrogen fuel cell vehicles work, what are their advantages and disadvantages and, most importantly, why we won’t see them on the roads for quite some time.

So hit the jump and find out.

First off, let’s explain just what hydrogen fuel cells are. A fuel cell is basically an electrochemical cell which can generate electricity through the use of various materials. In the case of hydrogen fuel cells, they use hydrogen (duh), and combine it with oxygen. The resulting reaction produces water, but also doses of electricity and heat.

Said electricity is then used by a motor which powers the wheels. The emissions consist of mainly water, instead of anything harmful like CO2 or greenhouse gases. Carmakers tinkered with this technology for some time now, and we’re even seeing prototypes like Honda FCX Clarity being leased in territories which have hydrogen refueling infrastructure.

At a general glance, such an architecture would seem perfect, right? Oxygen is all around, hydrogen is one of the most plentiful chemical elements on Earth, and no harmful emissions are generated. But there are quite a few things preventing us from driving around in FCVs (Fuel cell vehicles).

First off, hydrogen is pretty “popular” on Earth, but most of the times it is trapped in various other compounds. As such, most of our current ways of producing it revolve around using fossil fuels. You don’t have to be a rocket scientist to figure out that even if the car doesn’t need fuel, the hydrogen-producing plant still does.

Things are changing though, as regenerative energy sources are used in the production process, but they aren’t that profitable just yet. Until they develop, you can’t actually call FCVs “clean” means of transportation, the same way as electric cars still rely on power generated by plants using charcoal or other pollutant means to produce said power.

Another major disadvantage to the technology is that it is quite expensive. Currently a FCX Clarity is being leased for around $600/month. Seeing as how customers are still weary of paying extra for a hybrid or plug-in hybrid car, they most certainly won’t pay even more for FCVs.

Another inconvenience is the ambient temperature. More specifically, fuel cell vehicles won’t be able to generate their intended power output because of freezing temperatures. As we revealed above, heat is generated in the process, but until the fuel cell “warms up”, you’re going to have to sit in the vehicle with plenty of clothes on. Such a problem also plague plug-in hybrids or EVs, which see their battery capacity drop in the winter time.

Steps are being taken to improve this situation, but if you’re paying $600/month to save the world, you won’t be pleased with hanging around the car waiting for icicles to form on the tailpipe, while the fuel cell warms up.

Besides these disadvantages, FCVs have also generated two very opposite trains of thought. One group believes they are indeed the future of transportation, albeit a pretty distant one, and another, more numerous one, which believes that such vehicles won’t become profitable, efficient or popular, no matter how much time passes.

Rounding up, while their overall appearance may signal their potential as the biggest thing since Rudolf Diesel and Nicolaus Otto decided to create their own specific engines, the reality isn’t all that pretty. They are expensive, inefficient, pollute and aren’t backed up by many people.

So, why are we even talking about such an idea? Let’s put it into perspective: the same problems were encountered by the car as a whole at the beginning of the 1900s. People thought horses were the best thing since the wheel, nobody needed to go faster, and everyone was pleased with scooping up horse poop wherever they went. From what we see today though, the humble car managed to overcome all its problems. Who’s to say hydrogen fuel cell vehicles won’t do the same? Only time will tell.

This has been a part of our RPMGO Answers feature, which tackles various automotive debates or questions, and tries to find a simple explanation or to reveal all sides of the discussion.

If you want a specific question to be answered, why not contact us?