The Lamborghini Countach was manufactured by the Italian automaker between 1974 and 1990 and is a two doors coupe sports car well known for the wedge-shaped, sharply look. During its years of production, the Countach suffered a lot of changes that included the engine, the exterior design and the interior of the car.

After manufacturing different Countach models such as the Countach LP500 prototype, the LP400 and the LP400S, in 1982 the Lamborghini Company improved this amazing Lamborghini by equipping it with a more powerful V12 engine with a capacity of 5 liters. The body shape wasn’t changed for this model and the name established for it was LP5000S. This car was manufactured to compete against the Ferrari 365 GT4. 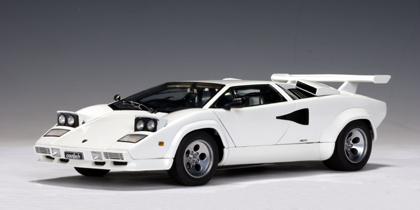 This Countach model had a wilder body and weighed more than the original model. Impressive were its scissor doors that could be lifted up and tilted forwards, making a statement when it came to style. In addition, the car featured an attractive and curvaceous body having elegant lines and some of the most modern mechanical components. The powerful V12 engine was placed longitudinally while the transmission was fitted in front of the engine to improve the weight distribution.

In March 1985 the Lamborghini Countach LP5000S was replaced by the Lamborghini 5000 Quattrovalvole designed as a competitor for the Ferrari Testarossa. This new Lamborghini Countach 5000 was displayed at the 1985 Geneva Motor Show and it was named after the new cylinder head which had four valves per cylinder. The body was manufactured entirely from alloy, only the doors being made of fiberglass. The front and the rear had minimum storage spaces.

This car was equipped with an improved 5.2 liters engine that increased the power. In addition, the carburetors were moved from the sides to the top of the new engine to improve its breathing. But because of this new placement of the carburetors, the car had a hump on the engine deck reducing the rear visibility. The Lamborghini Countach 5000 QV was designed with electric fans and large ducts placed behind the doors to help the middle engine cool down easier.

The Lamborghini Countach 5000QV released on the US market suffered some styling changes to allow bumpers follow the US federal standards. As a result, the bumpers were designed to be large and bulky, but one of the disadvantages of these standards was that the smooth lines of the car were ruined. This change was the most important one made on the exterior while under the hood the improvement was represented by the use of the Bosch K-Jetronic fuel injection which provided 420 bhp. The fuel injection replaced the six Weber carburetors used on the European models. In 1985, the buyers could purchase a Lamborghini Countach 5000QV for a base price of $100,000 and they could choose the optional features for some extra money. The optional features were the aerodynamic spoiler available for $5,500 and the sound system that could be bought for $7,500.

As every other Lamborghini car, the Lamborghini Countach 5000 is an amazing fast car that represents an important page of the Lamborghini history. It is a fascinating car still capable of turning heads on the highway and of racing at an impressive top speed on the road.