Everybody knows that when you say Lamborghini you think about the incredible supercars manufactured by this Italian car Company. And I know that you’re thinking at the incredible Gallardo (doesn’t matter what version or year of fabrication), the outstanding Reventon or the futuristic Lamborghini Insecta. But I don’t know if you ever thought that Lamborghini could manufacture motorcycles. The truth is that they did, even if it is only one.

This one of a kind Lamborghini motorcycle is called Lamborghini Design 90 and was designed in 1984-1985 in collaboration with the French leading racing bike manufacturer, Boxer. The Boxer Company is well known for its sophisticated racing motorbikes. For the Lamborghini motorcycle the aerospace technology was chosen being the key to creating a lightweight frame and a powerful engine for a rare bike. 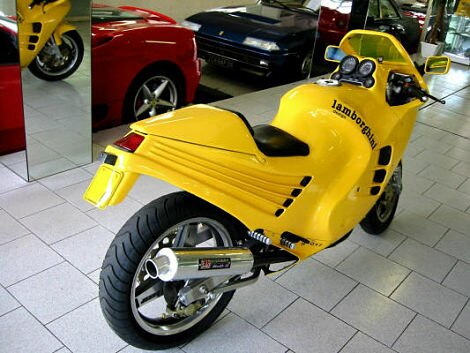 The engineer that made this Lamborghini dream come true is Claude Fior, famous in his line of work because of his unique talent that helped him design easily, effortless fast, two wheels vehicles. In 1986, the Lamborghini motorcycle was revealed to the public, but was available at an outrageous price almost double than the one usually paid for the most famous motorcycles available on the market in that time frame.

The design of the Lamborghini motorcycle was based on the 25th Anniversary Lamborghini Countach that resulted in a very surprising shape for a motorcycle. The body of the motorcycle is angular with the addition of some aerodynamic lines that give the bike an “extreme” look. When it comes to the driver’s seat, the shape is also unusual while the back is covered with a black panel that can be removed. If you remove this panel you obtain an additional space available for another passenger who might make the ride more interesting and fun. The material used to cover the seat is of course leather, a material quite rare in a motorcycle design.

This model was built only in five or six units, but the “spicy” price was justified because the Lamborghini motorcycle was equipped with a 1000 cc Kawasaki engine with four valves per cylinder. The motorcycle weighs around 170 kg and is able to reach a maximum speed of 250 km/h.

The components of the Lamborghini motorcycle used the best high technology available at that time and where essential for the overall high performance. An example of high quality component used for this Lamborghini motorcycle are the Brembo Gold-series brakes that had the role to stop the powerful engine and they did a great job. We can’t forget about the Fournales “air-oil” rear suspension either, another high-tech component. This suspension was really amazing and used the thick special oil as a damping system while the compressed air acted as a spring. The oil circulation was ensured by using a lot of calibrated holes that were placed inside the alloy tubes. An unusual thing about this Lamborghini motorcycle is the fact that the suspensions angles can be adjusted. That’s not a common feature for stock road bikes.

Despite its high technology and futurist design, the Lamborghini Motorcycle wasn’t as successful as Lamborghini wished. The result was due to the “spicy” price, the rarity of the Lamborghini motorcycle (only 5-6 were built) and the popular opinion that the bike was really hideous.

But if you want to buy one and if you have the money, you still have the opportunity to fulfill your dream. There is still a professional racing mechanic that tries to sell one of these outstanding Lamborghini motorcycles. But trust me it will cost you a little fortune. No more than $50,000 or $60,000.