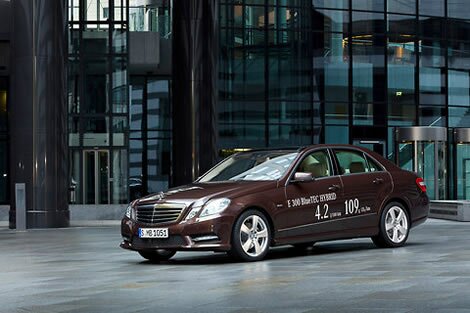 Mercedes unveiled last week at the Detroit Motor Show the most efficient E-Class model ever built, which is also the most efficient large executive car out there. Set to go on sale this summer, the car has a 4-cylinder, 2.1-liter diesel engine that generates 201 hp and is boosted by a 20 kW electric motor.

However, we should mention that the BMW costs 30,435 pounds while the Mercedes will cost somewhere around 40,000 pounds. We don’t have any official details regarding the performance of the car, but we should expect a 0-62 mph sprint in approximately 7 seconds.

The Mercedes-Benz E300 BlueTEC HYBRID has a stop/start system and a “ sailing mode” where the power unit is switched off when the car is driven up to cruising speed on the highway, thus allowing the aforementioned electric motor power the sedan. This hybrid system will also be available for the estate model and it doesn’t occupy any of the boot space thanks to its compact configuration.