Facing a tough competition from BMW’s X5, Mercedes’ M-Class or Audi’s Q5, Volkswagen will introduce a new generation of the VW Touareg SUV, which is scheduled to go on sale in 2010. As we can see from these renderings presented by AutoExpress, the suv will have a more aggressive design, influenced by the current smaller Tiguan. We can see a new front part, with wraparound headlamps, a large grille and a big bumper while the rear has a distinctive kink in the C-pillar and a split tailgate which will allow owners to open the glass independently.

The new Volkswagen Touareg will be powered by a 276bhp 3.2 liter V6 petrol engine, while the top version will get a 345bhp 4.2 liter V8. There will also be diesel versions, two V6 TDI units, with 2.7 liters and 3.0 liters. These engines will be mated with a six-speed Tiptronic gearbox. Rumors also say that somewhere around 2012 Volkswagen will offer a hybrid version, which combines a powerful electric motor with the 3.2 liter V6 petrol engine.

View one more photo of the new Volkswagen Touareg after the jump. 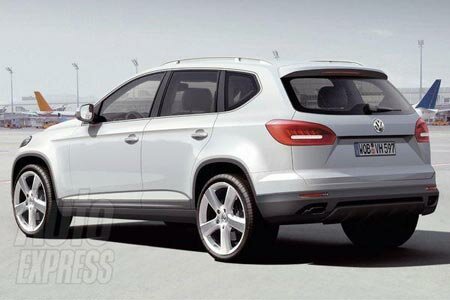