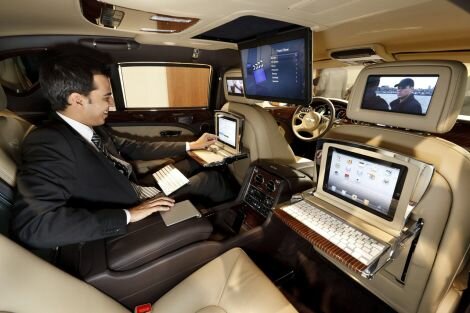 During the Frankfurt Motor Show, Bentley has presented the new executive interior concept for the Mulsanne, brand’s flagship model. Why is this thing so special? Because Bentley has changed the car into an Apple multimedia connective hub. Meaning that they have taken all the Apple gadgets from the market and integrated them into their car, from Apple iPads with Bluetooth keyboards to Mini Mac installed in the boot compartment and an Apple Media Center.

In addition to this, the Mulsanne features a ’W-Lan’ internet connectivity, and a 15.6″ High Definition LED drop-down monitor. It has two electric-powered foldable picnic tables (maybe for in-car business meetings?), a center console full illuminated, various new storage areas, a Rear Seat Entertainment (RSE) and audio system. And that’s not all: a Tibaldi pen, a cooler, a Privacy Telephone handset, numerous lights set-ups, and different ports and connectors. Aren’t you impressed yet?

Besides all these technology installed, maybe you still wonder why this is promoted as an Executive Interior Concept. The answer is in all the features that it carries.
The price was not announced, but we guess it’s not low.

What do you think about the idea of having all your gadgets installed on you car?