Here at rpmGo we are not big fans of the Porsche Panamera so it shouldn’t come as a surprise to you that this stretched version created by Ruf is not our cup of tea. Known as the Panamera XL, the car will be heading to China, a very important market for Porsche since more than 50% of the Asian market is accounted by China.

In 2011, Porsche managed to sell 24,340 units in China, which is almost 65% more in comparison to 2010. The German automaker offers a wide array of models in China, ranging from roadsters to SUVs and supercars. However, they don’t have a long wheelbase version for the Panamera which could rival cars like the Audi A8L and the BMW 740iL, both models being already available in China. 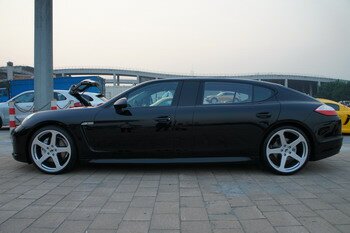 Ruf has decided to fill in this gap and launched the Panamera XL which is based on the Panamera S version (V8). They’ve stretched it about 16 inches while the wheelbase has grown by a little over 14 inches. As you would expect, the curb weight of the car is higher, with the Panamera XL gaining about 345 pounds in comparison to the standard version. The German tuner/automaker Ruf has also increased the output of the engine by 14 hp and 7 lb.-ft.