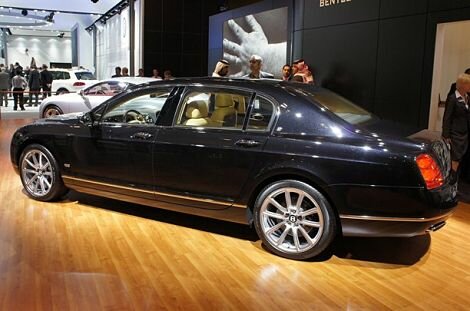 It seems that the Qatar Motor Show organized in Doha is the place where automakers come to launch special editions of their models. First, Volkswagen rolled out two special editions of their highly successful Touareg sport utility vehicle. After that, Lamborghini launched a the Gallardo LP 560-4 Bicolore and now Bentley unveiled the Arabia Continental Flying Spur Speed which will be made in a limited series of only 50 units.

With a staggering price of 155,000 pounds, this special edition comes with a bundle of extras over the standard Speeds, most of them upgrading the visual elements of the vehicle. The model is easily distinguishable by the interior and exterior “Arabia” motifs that can be found on the ashtray lid badge, tread plate and on the front bumper.

The Arabia rolls on 10-spoke, 20-inch bright silver rims that are compatible with the carbon ceramic brakes which are an optional feature. The color choices for the bodywork are also unique in comparison to the standard model.

Inside the luxurious cabin, this limited edition comes with deep-pile carpet mats with hide trimming, veneered picnic tables with inset vanity mirrors to the rear of the car’s front seats and also it has ventilated fluted seats.

The Bentley Arabia Continental Flying Spur Speed will be offered with a variation of the company’s W12 engine that outputs 600 hp and 553 lb.-ft of torque which allows the car to reach 60 mph in 4.8 seconds and have a top speed of 200 mph.