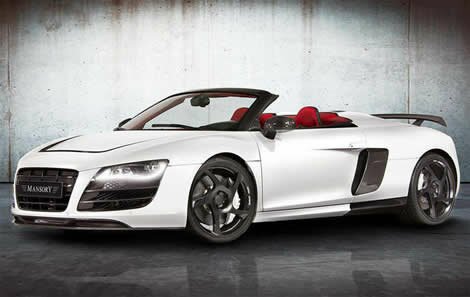 You probably know that Mansory is one of the most eccentric tuners in the world but their latest upgrade program for the Audi R8 Spyder is not shocking at all. They’ve fitted the beautiful cabrio with a new aerodynamic package which is considerably more discrete than what we’ve seen before from Mansory. 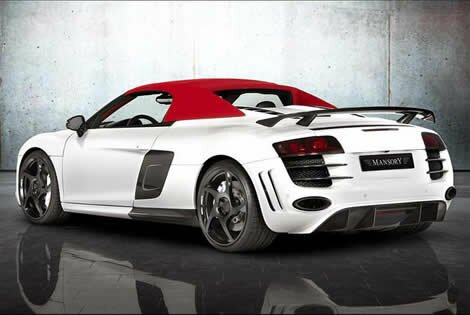 Most of the body parts that they have created are made from carbon fiber: front grill, front / side / rear skirts and the hood trim parts. It also comes with a carbon rear wing, which along with the front spoiler increase the downforce the R8. Other than that, the car has been fitted with a new apron that has a built-in diffuser while the wheels measure 20 inches and the suspension system has been lowered. 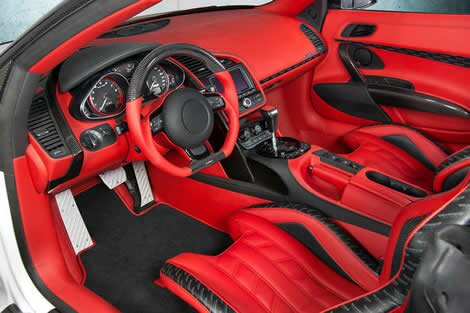 
Audi of America has revealed new details about the next performance models that will be launched on the US shores.

The German company finally decided to put a launch date on the new Audi RS5 three-door coupe, which will be hitting the American market in 2012. Although a bit later than expected, we’re pretty sure fans will line up to get a taste of the car’s 4.2-liter V8, capable of a whopping 450 HP.

Until 2012 though, four-ring fans will have their hands busy, as the company has also detailed and priced the Audi R8 Spyder V10. The open-top supercar will be hitting dealerships in the following months, with a price starting at $161,000, without the $1,250 destination charge.

If you want to ride around like Iron Man’s Tony Stark, you’re going to have to shell out either the aforementioned $161,000, for the six-speed manual, or $170,000 for the R-tronic transmission. Both models still develop 525 HP from that massive 5.2-liter V10 engine.

So there you have it US customers, Audi still wants to satisfy your need for performance, but it won’t do it cheaply.

END_OF_DOCUMENT_TOKEN_TO_BE_REPLACED


Audi made a lot of rich people with seaside homes extremely happy when it revealed the R8 Spyder V10 model (pictured above).

After a lot of rumors though, the Ingolstadt company has finally decided that poorer rich guys also deserve the R8 Spyder, and has revealed a V8 version, powered by the 4.2-liter engine, found in the original R8, and boasting the same folding cloth top as its V10 brother.

The less-powerful R8 Spyder will be able to provide adequate thrills, as the V8 engine is still capable of 430 HP, which are sent through either the R-Tronic semi-automatic gearbox or a six-speed manual, to all four wheels, thanks to the quattro system.

Among the differences between the V8 and V10 Spyder we can find conventional dampers as opposed to the magnetic ones, 18-inch wheels as opposed to 19-inch ones, but you will be able to order those V10 options for a price, of course. The same goes for the braking system, as a ceramic upgrade is optional.

The Audi R8 V8 Spyder will go on sale this fall in Europe, but nothing has been announced about US availability just yet.

END_OF_DOCUMENT_TOKEN_TO_BE_REPLACED


Driving a car is nothing unusual nowadays. Almost everyone drives a car. What is interesting for us to notice is that different persons like to drive different cars and that there have been created numerous models of cars in time which have been more appreciated by some persons and less by others according to their different choices and needs in this respect.

Many persons have been interested in different models of Audi cars in the last few years as they are considered to be very interesting to be analyzed. One of these models is Audi R8 which also presents interesting specifications to be considered by those interested in becoming better informed about all sorts of cars of this type.

Audi R8 is a sports car which presents a longitudinally mounted type of engine and a four wheel drive system. In what concerns its body style it is important to be mentioned 2 available styles: a 2-door coupe type which has been presented in 2007 and a 2-door convertible model which has been introduced in 2009. Its transmissions are the following ones: a 6 speed manual one and an R-Tronic semi-automatic one. Its wheelbase is of 104.3 in.

Two of the types of engines which need to be considered when discussing about Audio R8 area V8 internal combustion type of engine, initially used and V10 FSI internal combustion type of engine, the newer type. The maximum motive power is of 4.163 cc for those which include a V8 engine and respectively of 5.204 cc in the case of those including a V10 engine.

Two models of Audi R8 that could be considered and analyzed by those interested in motorsport are the Audi R8 LMS and Audi R8 Clubsport, which represent an enhanced version of the Audi R8 V10 model having been previously mentioned. Audi R8 Spyder was made public in 2009 and many users have appreciated the convertible model very much as it was considered to look pretty great. Certainly, other features were considered important as well and many of those who have analyzed them have considered this car to be a very good one in general.

Audi R8 is one of the models of cars which should become familiar to all of us nowadays because there are numerous useful and interesting aspects to be considered about it.


In order to further showcase the R8 Spyder, Audi called its DTM (Germany’s touring car series) driver Mattias Ekström to an underground parking lot and gave him the keys to the impressive 5.2-liter V10-powered convertible.

The result? Pure bliss for any fan of the four-ringed manufacturer, as Ekström pushed the Spyder to its limits by drifting around the parking lot.

Hit the jump to see the Audi R8 Spyder blow flames out from the exhaust in two versions of the same video: a short but enticing one and a longer but a bit boring one.
END_OF_DOCUMENT_TOKEN_TO_BE_REPLACED

ABT tunes the Audi R8 Spyder


For many Volkswagen group fans who aren’t particularly pleased with the performance levels of stock models, German tuner ABT Sportsline has always been a popular choice for upgrades and aftermarket parts.

This time, the company went to work on the pretty powerful Audi R8 Spyder, and the results are impressive, to say the least. First off, the team modified the massive 5.2-liter V10 engine, which now produces 600 HP, as opposed to the stock 525 HP. This means a 0 to 62 mph time of 3.8 seconds, and a top speed of 199 mph (just be sure to put the top on when attempting it).


As you can also see, the styling of the ABT Audi R8 Spyder has also been modified. A complete carbon fiber body kit was added, made out of a front apron, restyled grille, side skirts and a rear apron complete with a spoiler. Two-tone lightweight alloy wheels were also added, being connected to a new, upgraded suspension system.

END_OF_DOCUMENT_TOKEN_TO_BE_REPLACED

Powered by the 5.2 liter V10 FSI engine, capable of delivering 525 HP with a torque of 530 Nm, available at 6,500 rpm, the new convertible will also feature both a manual and an automatic gearbox, which will be coupled to Audi’s patented Quattro all-wheel drive technology. The Ingolstadt manufacturer also highlighted that the automatic transmission will get a better fuel economy, 13.9 liters/100 km (16.9 US mpg), as opposed to the manual transmission, which achieves 14.9 (15.8 US mpg). In terms of performance, the new convertible R8 is only a tad bit slower, reaching 100 km/h (62 mph) from a standstill in just 4.1 seconds, .2 seconds slower than the coupe R8. Its top speed though is an impressive 313 km/h (195 mph).


The lightweight (30 kg/66 lb) cloth folding roof will be down in just 19 seconds at the press of a button, even at speeds up to 50 km/h or 31 mph. The reinforcements are particular in the area of the main window, which is now coated with anodized aluminum, via Audi’s Space Frame technology. but also around the A and B pillars, sills, center tunner, rear wall and floor. But even though a lot of modifications have been made, the manual transmission-equipped R8 Spyder will weight only 25 kg (55 lbs) more than the average R8.

Other enhancements have been made around the engine cover, which received a redesign, as it now houses two arched cowls which go down to the spoiler lip and have multiple air vents. Speaking of vents, the side ones will not be coated with the same color as the rest of the body, eliminating the two-tone look of the old R8.


Inside however, the R8 Spyder will hold a very interesting pieces of technology, as the leather on the seats is covered with a special pigment that is able to reflect the infrared component of the sunlight, enabling your seats to stay up to 20 degrees Celsius cooler than the air surrounding them at any given time.

The new Audi R8 Spyder will be launched in Germany in the first quarter of 2010, with an asking price of €156,400. With any luck, it will also arrive onto other territories, like the United States, in the summer or fall of next year for around $230,000.