The race version of the 2012 Audi TT RS can now be ordered if you have 180,000 Euro to spare and if you are a part of a racing team. One of the main differences between this one and the race car is that the race-ready version has a front-wheel drive configuration.

It is motivated by a 5-cylinder 2.5-liter modified engine that produces 375 hp (380 PS / 279 kW) and is mated to a 6-speed sequential racing gearbox. The development of the car was conducted by the Technical Development division of the Ingolstadt-based automaker along with the company’s Quattro GmbH branch.

It is specified for the SP4T class which is a part of the VLN Endurance Championship series. This past June, an Audi TT RS managed to win in its class at the 24-hour Nurburgring-Nordschleife endurance race.

Those of you who live in the U.S. of A won’t have to wait anymore for the sexy Audi TT RS as it will go on sale in the following weeks at a starting price of $56,850, without counting the dealer charges, destination charges, title, taxes and so on.

You’d be happy to hear that the U.S. version is more powerful than its European counterpart as its 5-cylinder TFSI turbocharged 2.5-liter produces 360 hp and a peak torque of 343 lb.-ft whereas the European version packs 340 hp and 331 lb.-ft (450 Nm). This entire horsepower is sent to all the wheels via Audi’s quattro system and a 6-speed manual transmission.

The Ingolstadt-based manufacturer says that the TT RS is capable of reaching 62 mph from start in only 4.1 seconds, before hitting a top speed of 174 mph (280 km/h). The car also benefits from the Audi magnetic ride that permits the suspension characteristic to be actively modified, along with exclusive 19-inch alloys, prominent body sills, exterior mirror housings available in matte aluminum as well as a fixed rear wing.

At the upcoming Australian International Motor Show, the German automaker Audi has announced that it will bring a limited edition of its sexy TT-RS model. Only 45 units will be made and all of them will come with a seven-speed S Tronic gearbox, along with additional equipment that usually costs $8,460 but Aussies will get it for free.

This gearbox is already available in Europe and thanks to it; the TT-RS can do the 0-62 mph sprint in only 4.3 seconds, which is 0.3 quicker in comparison to the standard 6-speed transmission. The extra gear has been configured by the engineers at Audi as a high-geared overdrive that reduces engine speed at highway speeds, which allows the coupe to consume only 8.5 liters / 100 km and emit 197 g / km of CO2.

Aside from the additional performance brought to the car, this gearbox features an incorporated launch control function which provides maximum power at a minimum wheel spin via Audi’s famous quattro AWD system. The top speed of this TT-RS Limited Edition S Tronic is limited electronically at 250 km/h.

Pretty soon, the Audi TT-RS will be heading stateside and more and more tuners are rolling out performance packages for this beauty, allowing US citizens to have more options to choose from. One of the newest was developed by O.CT and combines aesthetics upgrades with a boost in the engine’s power.

The standard version of the TT-RS develops 340 hp and 450 Nm from its turbocharged 2.5-liter power unit, but thanks to the modifications brought by O.CT, the same engine can deliver 420 hp and 570 Nm. For obtaining the additional 80 ponies, they had to change some hardware components and reprogrammed the ECU. They’ve installed a new stainless steel exhaust system that has a silencer and a rear silencer with a control valve. In addition, the TFSI engine management has been revised and they’ve added a new charge air cooler kit.

Design-wise, the O.CT Audi TT-RS Roadster sits on a set of 5-spoke 20-inch alloy wheels that have a curb weight of only 13.8 kg each. The car also got a KW coilover suspension V3 that offers “agility in (almost!) any situation.” 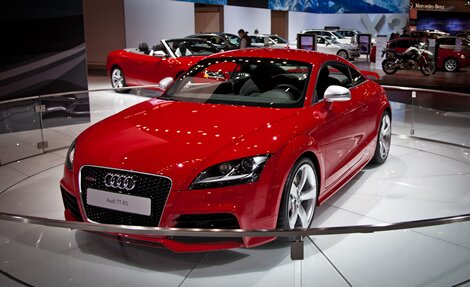 We have good news and bad news about the US-spec 2012 Audi TT-RS. The good news is that back in September last year the German automaker said that they will be bringing the TT-RS in the United States. The bad news is that they will bring only 1,000 units of the car, or at least that is what they said at the Chicago Auto Show a couple of days ago. The TT-RS will be $10,000 more expensive in comparison with TTS model, which has a starting price of $51,000. The TT-RS will be available at US dealerships at the end of this summer. 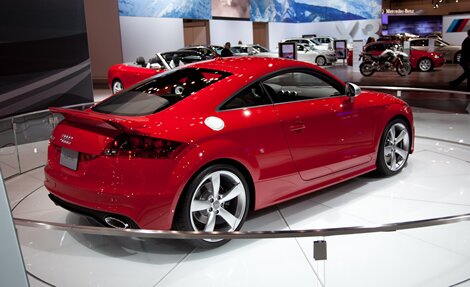 The car will feature a 5-cylinder 2.5-liter turbocharged engine that will be 20 hp more powerful in comparison to its European sibling, rounding up the total output to an impressive 360 hp. This power unit will be exclusively mated to a traditional 6-speed manual gearbox, allowing the TT-RS to do the 0-62 mph sprint in only 4.6 seconds. We don’t know its top speed but it should be a little bit higher thanks to the extra 20 ponies under the hood. 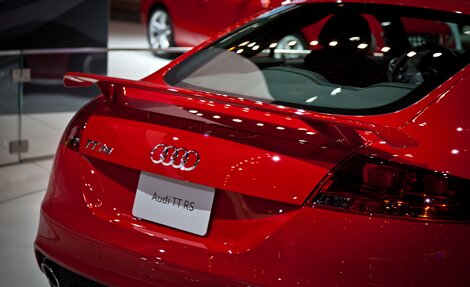 If you didn’t know, the TT-RS is the most powerful and expensive TT money can buy these days and it is easily distinguishable by its high-gloss black single frame grille with a frame in matte aluminum appearance. It also sports xenon plus headlights with LED daytime running lights, imposing side sills, exterior-mirror casings in a matte aluminum look (which I really don’t like) and cool massive rims in a 5 twin-spoke design. 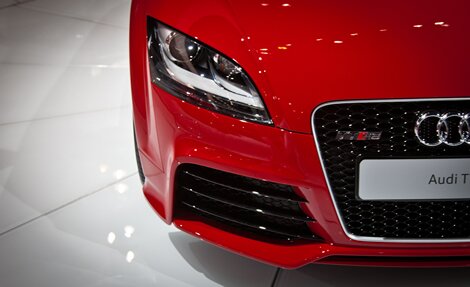 Inside the cabin, the 2012 Audi TT-RS sports heated sports seats that are wrapped in a leather and Alcantara combination with a silver contrasting stitching and the embossed “TT RS” logo. It also has aluminum pedals and a leather multifunction sports steering wheel.


It seems that Facebook users know how to get behind a good petition, as the one to bring the stunning Audi TT RS has gathered over 11,500 signatures in just a month.

As such, the German company has announced that the blazing fast sports car will be making it to US shores in the third quarter (fall) of 2011.

The Audi TT RS is powered by an turbocharged 2.5-liter inline-five, capable of 360 HP and 332 lb-ft of torque. It will be primarily targeted against the Porsche Boxster and the Mercedes-Benz SLK. Unfortunately, only the hardtop TT RS will be making its way over the Atlantic, as the soft-top roadster is still exclusive to the European market.

Expect more details concerning price and options to be revealed as we approach the launch of the powerful compact sports car.

END_OF_DOCUMENT_TOKEN_TO_BE_REPLACED

Audi starts petition to bring the TT RS to the U.S.


Audi fans, ready your Facebook accounts, as the Ingolstadt manufacturer has revealed an online petition in favor of bringing the extremely hot Audi TT RS to the USA.

It seems that the German manufacturer has left the decision in the hands of Audi fans in the US, and wants to see just how many of them want the 335 HP sportscar arriving in their local dealerships.

As you might remember, the Audi TT RS is already present on American roads, but just those up in Canada, where 250 sportscars were delivered as part of a limited series.

Now, if enough people will sign the petition, the German company might also ship some of its extreme sportscars to the USA. While no other details were revealed, like how many signatures are required, one click wouldn’t hurt. Check out the petition at this link.


Canada is getting some pretty sweet deals these days in terms of cars. After being able to order the R performance package for the Kia Forte Koup, the country will now be getting its hands on the very hot Audi TT RS and will be able to get the new BMW X1 in sDrive variants (that’s rear-wheel drive) instead of just the plain xDrive ones.

The Audi TT RS is the choice for any respectable Audi roadster fan, delivering 335 HP to anyone with the money to afford it. But while Europeans have been enjoying the hot roadster for some time now, North Americans were denied this pleasure. Now, a lucky few (around 250) will be able to purchase the TT RS, as the Ingolstadt manufacturer will ship a limited batch of models. No other details are known, like what body type (coupe or convertible) the cars will be, but plenty of US fans will definitely be bummed if some don’t appear on US land.


Secondly, it seems BMW saw fit to deliver the rear-wheel drive goodness of the X1 to Canadians, as opposed to US citizens who can just order the all-wheel drive edition of the small crossover. But as we revealed in our test drive with an xDrive variant of the BMW X1, if you really want to do leave the comfort of regular asphalt, AWD is the best choice. Still, a lot of BMW fans will be bummer that the tail-happy variant of the X1 will be exclusive to those in the North.

END_OF_DOCUMENT_TOKEN_TO_BE_REPLACED


What do you think about the Audi TT? “Too slow” you say? How ’bout the TT RS? Still not good enough? Well how about you go to the tuners at MTM, which have just unveiled a three-stage tuning program for the TT RS, which will take the five-cylinder engine to new heights.

The standard Audi TT RS rolls out from the factory with “just” 340 HP and 332 lb-ft of torque, but thanks to some clever tweaking, MTM can take it upward to 424 HP, in the stage three upgrade program. THis is all thanks to upgrades done to the ECU and the exhaust system, as such, a stage three MTM Audi TT RS can sprint from 0 to 100 km/h in 4.2 seconds and up to a top speed of 185 mph.

Other enhancements include a set of 19-inch Bimoto wheels, manufactured by MTM as well as 15-inch brakes boasting eight-piston calipers and lowering springs fitted to the suspension.

END_OF_DOCUMENT_TOKEN_TO_BE_REPLACED


The new Audi TT RS coupe is definitely a fast model, but thanks to the efforts of German tuning house AVUS Performance, it has truly reached a formidable level, offering a huge amount of power from its small 2.5-liter five-cylinder supercharged engine: 450 HP and 472 lb-ft (639 Nm) of torque.

In order to reach this new power threshold, the team added a modified turbo, a new, reprogrammed ECU and a new exhaust system. All of the tweaks mean that the new Audi TT RS Ur Quattro will reach 60 mph (96 km/h) from a standstill in just 3.8 seconds, and will keep on going way past its normal limit of 280 km/h until 312 km/h (194 mph). These engine modifications weren’t priced sadly.


In order to handle all of the extra speed and to go over corners more tightly, a set of adjustable coil-over suspension springs were fitted, which cost about €1,299. On the outside, AVUS added a matte black vinyl wrap, which costs €1,999, and a set of 20-inch glossy black rims, wrapped in Hankook S1 Evo tires, which coupled with the discount the company is offering for rims and tires of 25%, will set you back “just” €6,400. Other accessories, like Recaro sports seats can also be added if your wallet allows it.