Even though the Maybach didn’t have the success Mercedes expected, they are pretty content with how the brand’s going and said it doesn’t cost that much to keep the brand going. But that’s not what the dealers think about it. With $500,000 spent by dealers with creating unique showrooms for the Maybachs, they are not happy with the sales they got. When Mercedes released the Maybach 57 and 62 back in 2003, they hoped to sell 500 units every year, dealers have sold only 778 cars up until July of 2007.

With this situation, it looks like Mercedes is considering absorbing Maybach and rebrand it as it’s top of the line. Word on the street is that Mercedes is considering adding some other models to the Maybach range, like a smaller model, in the S600 range, a Maybach version of the GL-Class and a convertible based on the Ocean Drive Concept.
END_OF_DOCUMENT_TOKEN_TO_BE_REPLACED

Alfa Romeo announced that at the Frankfurt Motor Show it will bring its special edition Alfa Romeo 147 CNC CoSTUME NATIONAL. This will be the first result of the partnership between between Alfa Romeo and italian stylist Ennio Capasa and the customization program will be available for all the Alfa Romeo model range. As for the 147 CNC, it will only be available in a 100 units limited edition, with a 150 bhp 1.9 JTDM engine and a wide range of options including a BoseÂ® Hi-Fi system with subwoofer, low suspension settings, Xenon headlights and satellite navigation.
END_OF_DOCUMENT_TOKEN_TO_BE_REPLACED

At next week’s Frankfurt Motor Show, Fiat will present it’s Fiat Aria concept, an environment-friendly project based on the current small Panda. The concept is powered by a new 80 hp 900 cc Turbo twin-cylinder engine, with CO2 emission levels limited to 69 g/km, engine that can run on petrol and CNG (70% methane, 30% hydrogen). The ‘green’ technology features the Multiair system for dual petrol/methane-hydrogen fuel management, MTA gearbox and Stop&Start device.

Eco-compatible materials (recycled, recyclable or of natural origin) were used for both outside and inside. The interior of the Fiat Aria concept is upholstered with natural fibres (cotton and linen), woven coconut fibre and biodegradable elements, while the exterior panelling is made of semi-transparent eco-resin.
END_OF_DOCUMENT_TOKEN_TO_BE_REPLACED

Citroen C-Cactus Concept to be presented at Frankfurt

With the Frankfurt Motor Show so close, we’re gonna see a looot of concepts around here. Here is what Citroen is preparing us, the C-Cactus Concept. Measuring in at 4.2 m (165 in), the small hatch concept features a Hybrid HDi drivetrain capable of 69 mpg (3.4 l/100km) on the combined cycle and emissions of 78g/km of CO2 all that used to take the car to a top speed of 93 mph (150 km/h).

I have to say, I don’t really know what to say about the front, with those large air intakes, not really my thing, but overall it’s a cool vehicle from Citroen. And what’s even better is that it looks like the Citroen C-Cactus Concept will be the starting point for Peugeot’s future hybrid hatch, which will compete Toyota’s Prius. View more photos after the jump.
END_OF_DOCUMENT_TOKEN_TO_BE_REPLACED

Just a couple of days ago we announced the 2008 Mercedes C Class Estate and now we have another goodie for wagon fans. Mercedes’ factory tuner, AMG will present at Frankfurt the Mercedes C 63 Estate. The car will be equipped with AMG’s aspirated 6.2-liter V8 engine delivering 457 Hp and 600 Nm of maximum torque. No official info, but rumors say it will sprint from 0 to 100 km/h (62 mph) in 4.6 sec and to a top speed of 250 km/h (155mph), electronically limited. More pics after the jump.
END_OF_DOCUMENT_TOKEN_TO_BE_REPLACED

Creepy! Audi R8 burns on a street in Germany 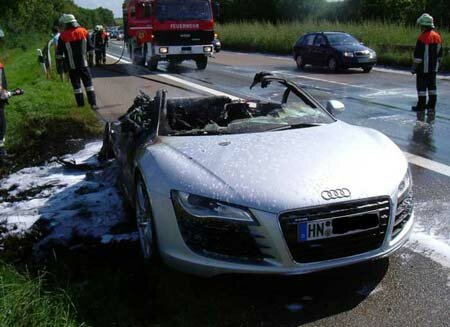 You all know the R8 super car from Audi, but I bet you didn’t imagine this. Here is what’s left of a beautiful Audi R8 after it burst into flames on a street in Germany. While it seems there were some reports of several R8s that burned while in development, this is a production model. It seems that fuel spillage is what caused this, but on R8talk forums there are also some other speculations.

Whatever the reason, I think this affects Audi image pretty bad, because I find this unacceptable to a serious producer like Audi, especially on a super car, which is supposed to be at the highest level of engineering. View more photos after the jump.
END_OF_DOCUMENT_TOKEN_TO_BE_REPLACED

The first Jaguar XF to be auctioned for charity

Like the buzz that was created recently around the new Jaguar XF wasn’t enough, the British producer thought a little more publicity won’t hurt. So they’ve decided that the first Jaguar XF to be put up for auction on September 7th, at the Ricoh Arena in Coventry, UK. The money taken from the lucky guy who will own this car will all be donated to The National Society for the Prevention of Cruelty to Children (NSPCC).

For the money he gives, beside the pride driving the first XF, the new owner will choose the color options for the car with help from Ian Callum, Jaguar’s head of design, plus he or she will be able to visit the Castle Bromwich factory in Birmingham to see his XF being built.

For the rest of the British guys who won’t have the money for this special, here is the Jaguar XF pricing for UK.

END_OF_DOCUMENT_TOKEN_TO_BE_REPLACED

A couple of days ago we announced that the Peugeot 308 and the Kia Cee’d achieved a 5-stars rating at Euro NCAP tests. Now another car got 5-stars rating, somehow surprising, it is the new Fiat 500. Now I find this really weird, I mean, either the little guy is really good or there’s something wrong with the NCAP tests. I mean, where’s so much safety coming from? I mean if an Escalade ‘bumps’ into your Fiat 500, my guess is that you can kiss your 5-star ass goodbye.
END_OF_DOCUMENT_TOKEN_TO_BE_REPLACED

Chrysler’s new owner, Cerberus Capital Management took an interesting decision, they’ll not get the new Dodge Challenger to Europe. I find that weird, first of all because Chrysler’s previous management wanted to bring the Challenger to Europe, and second of all it’s a shame to take this cool car from the European muscle car fans.

But there is hope, because it seems that, if enough demand is recorded, some private importers will be able to sell the car, but at a notable higher price.
END_OF_DOCUMENT_TOKEN_TO_BE_REPLACED

Facing the tough competition of the excellent Mercedes C-Class and the upcoming Audi A4, BMW has started work on a facelift for the current 3 Series. Here are some spy shots presented by E90Post and we can see that the sedan will get a sportier look, with a more angular front bumper, a more rounded grille, a more sculptured hood, a sharper side skirt and a revised rear bumper with a different diffuser lip. We can see camouflage on the front bumper tail lights, so we can also expect some changes there.

BMW will be the only car to offer Google Local Search

In a press release made today, BMW announced that it will be the only automobile manufacturer to offer the Google local search in the car. BMW drivers will be able to use this search function to Google for local information everywhere in Germany. When you find what you searched for, the details are transferred to the navigation system and car phone. The system identifies the location and destination of the vehicle automatically and displays the results in the vicinity with details of address, phone number and distance. For example, you can look for Yellow Pages information like names and addresses of restaurants and hotels and locate service stations, banks, supermarkets, cinemas and public bodies.

This comes after Google and BMW have been offering the function “Send to Car” for transferring search results from the Google Maps website directly to the car for some time as part of BMW’s “ConnectedDrive” which combines all individual online, assistance and service systems in the car.
END_OF_DOCUMENT_TOKEN_TO_BE_REPLACED

Toyota RAV4 Cross Sport to be introduced at Frankfurt

Toyota will have some really interesting premieres at the Frankfurt Motor Show which will start on September 13th. Besides a small car concept and a special version of the Yaris, they’ll also introduce the Toyota RAV4 Cross Sport. This RAV4 sport edition will feature new 17-inch alloy wheels, protective plates under the bumpers, LED tail-lamps, new audio and DVD navigation system with a 6.5-inch touchscreen, parking assistance and anthracite colored seats.

Nothing offcial yet, but rumors say the Toyota RAV4 Cross Sport will be available for European customers immediately after Frankfurt with two engine options, an 152 hp 2,0 liter petrol unit and an 136 hp 2,2 liter diesel unit. View more pics after the jump.
END_OF_DOCUMENT_TOKEN_TO_BE_REPLACED

Latest Euro NCAP tests had some pretty interesting results. First of all, it’s the first time Kia achieves a 5-star rating, the Cee’d having an overall score of 34 points. Second of all, Peugeotâ€™ proves once again that it makes some of the safest cars on the streets, with the new 308 joining Peugeot’s 1007, 207 and 407 5-stars rating. In the child protection tests both models were awarded with 4 out 5 stars while in pedestrian protection, the Ceeâ€™d got a mediocre 2-star rating (out of 4) and the Peugeot a 3 star rating.
END_OF_DOCUMENT_TOKEN_TO_BE_REPLACED

Launched in Japan in May 2007, the Quashqai/Dualis was sold in 9,466 units. With production at the Kyushu plant scheduled to start in early 2008, Nissan expects to sell 24,000 units. This decision comes after Nissan’s announcement in June, that Â£2.4 million ($5 million) were invested into the Sunderland plant to increase Qashqai production, so we can definitely say that the Quashqai was a big success for Nissan.
END_OF_DOCUMENT_TOKEN_TO_BE_REPLACED

Keyless systems not so safe

I bet most of us won’t imagine life without one our best little friends, the car remote control that opens the car for us. I can’t remebmer last time I used the key to unlock my car’s door the old fashioned style. But a recent study made by some researchers from Israel and Belgium showed that the technology used for keyless door locking, called KeeLoq is not safe at all. One of the reasons is that the KeeLoq technology used for the system, though it was improved in time, was developed 1980.

Each device has a unique key that takes 18 billion billion values. With 100 computers, it would take several decades to find such a key. Therefore KeeLoq was widely believed to be secure. In our research we have found a method to identify the key in less than a day. The attack requires access for about 1 hour to the remote control (for example, while it is stored in your pocket). Once we have found the key, we can deactivate the alarm and drive away with your car.