BMW to be featured in Mission: Impossible – Ghost Protocol

If you missed seeing BMW in a movie, soon you’ll get some hot action and one very hot BMW. Mission: Impossible – Ghost Protocol will feature the BMW Vision EfficientDynamics concept car, which will be Tom Cruise’s ride for the movie.

“We are thrilled to be involved again in another Hollywood Blockbuster. The BMW Group leads the way in developing future mobility with a focus on sustainability. One great example is the BMW Vision EfficientDynamics concept car which will be presented in the film. With its futuristic design and large glass surfaces, the car offers a fascinating perspective on the future of sheer driving pleasure – in combination with maximum efficiency. Also with BMW ConnectedDrive technology, it is the perfect car for Ethan Hunt to outsmart his pursuers through narrow streets and busy city traffic.”,

It seems that the BMW Vision EfficientDynamics will be a star of the upcoming Mission Impossible 4: Ghost Protocol movie, which will be launched on December 16th this year. A member of the Team-BHP forums managed to grab a spy shot of the concept on the movie’s set.


It seems that slow teasers that reveal parts of new cars are so 2009, as for the upcoming Paris Motor Show, BMW has taken viral marketing to a whole new level.

The German company recently launched a new website called DontBlogAboutThis, in which a special type of BMW 6 Series is showcased with stickers on it.

While the website only shows brief part of the car, there’s also a video showing the 6 Series in motion, but the distinct sound of an internal combustion engine is apparently absent. Also, as you can see below, it is equipped with special wheels as seen on hybrid or electric models.


Another photo was revealed afterwards, showcasing that we may be dealing with a very special type of BMW. While from the back it looks like a regular 6 Series, the front, as you can see above in a brightened version, appears to be that of the Vision EfficientDynamics hybrid show car.

Frankly, our guess is as good as yours. All will be revealed at the Paris Motor Show though. Hit the jump to see the two videos of this mysterious BMW in action.
END_OF_DOCUMENT_TOKEN_TO_BE_REPLACED

BMW Vision EfficientDynamics to be built as the i100 sportscar in 2013, M version likely


Ever since the BMW Vision EfficientDynamics concept last year, rumors about its unavoidable production version have been appearing left and right.

The newest outlet to share its two (euro)cents is Germany’s AutoBild, which says that the Vision concept will become a reality in 2013.

According to the magazine, the concept will be produced as the BMW i100 sportscar, part of the company’s Project i initiative. The regular model is likely to retain the hybrid powertrain of the concept. A 1.5-liter three-cylinder engine, aided by an electric motor, will power the rear wheels, while the front ones will be driven by another electric motor. Power for the motors will be delivered by a pack of lithium ion batteries.

Performance fans will also be taken care of with an M-badged performance version. AutoBild says the M division will combine a 450 HP twin-turbo inline-six cylinder engine, which will be used on the next generation M3, with the electric motors. The lithium ion pack will be replaced by a set of supercapacitors, for extra performance.

Bear in mind that this is just speculation, at the moment. The BMW Vision EfficientDynamics will no doubt be made by the German company, but no official details have been revealed just yet.

END_OF_DOCUMENT_TOKEN_TO_BE_REPLACED


BMW’s 6 series has always been a special lineup, and produced the closest thing to a BMW supercar you could get, the M6. For the next generation though, things are going to change a lot. Not only through the complete restyle of the 6 lineup, but also in terms of the role the M6 will play.

According to new rumors, it seems that BMW will go all the way, and stay true to its promise of making a supercar based on the Vision EfficientDynamics concept it showcased in the last few months. How will it do that? The company will push the future M6 to its limits, and contend with the current go-to entry-level supercar, the Audi R8.

In order to do this, it will likely use the new twin-turbo 4.4-liter V8 engine, set to make an appearance on the next generation M5, but also throw in many of the fuel saving technologies used on the Vision concept, as well as some of its style. As you all know, the current M6 is pretty awesome in terms of power, but many don’t want to be seen within a five-feet radius of it.

This special combo of performance, style and fuel efficiency will definitely give the boys in Ingolstadt something to think about. Hopefully we won’t be kept in the dark for too long about this project.

END_OF_DOCUMENT_TOKEN_TO_BE_REPLACED 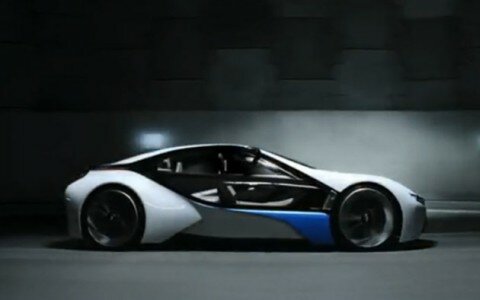 Audi isn’t the only carmaker who is churning out ads these days, as BMW opted to showcase its EfficientDynamics strategy with a new commercial in its “Joy is BMW” series.

This specific video tackles the technologies presented in the BMW Vision EfficientDynamics concept and how they are incorporated in all of the current Bavarian models.

Hit the jump to enjoy this great commercial from BMW.
END_OF_DOCUMENT_TOKEN_TO_BE_REPLACED

BMW to enter Vision EfficientDynamics hybrid sportscar into production in 2013


Out of all the recent concepts to arrive from BMW, the Vision EfficientDynamics one it showed off at the Frankfurt Motor Show was definitely the most impressive, shocking people with an aggressive sportscar design coupled with a hybrid powertrain setup.

Needless to say it light up a huge rumor fire, but the company has yet to reveal anything concrete about the concept going into production. Luckily though, InsideLine managed to find out some big details from one of its respected sources, according to which the Vision EfficientDynamics will enter production as soon as 2013.

The model will be a limited edition one, but there will be plenty to go around, as BMW is thinking of building somewhere between 5,000 and 10,000 of such hybrids, which will use a diesel engine mounted in the middle and two electric motors to develop, at least in the concept, 356 HP and 590 lb-ft of torque. Combine that with the goal of making the production model weigh less than 3,000 pounds, and you’ll be getting one heck of a sportscar.

Also, according to the same source, it seems that while the aggressive design will be tamed down a bit, fans mustn’t worry, as it will look the part. Last but not least, it seems that the name will be changed, in order to reflect something with a bit more attitude.

Overall, this is great news for BMW fans which have been salivating over the Vision EfficientDynamics for quite some time.