According to a report published by Autocar, the German automaker BMW is going to offer its range of 4-cylinder 2.0-liter petrol engines only in turbocharged versions. The engine will have varying output levels and the most powerful one is going to be a 241 hp (245 PS / 180 kW), the one already available for the X1 xDrive 28i model, offering 258 lb.-ft (350 Nm) of torque.

This 2.0-liter unit is going to be fitted with various turbocharging systems, depending upon the output variant. The aforementioned 241 hp-capable version has a twin-scroll turbocharger while the less powerful variants will feature a conventional turbo.

This new set of 2.0-liter turbo variants will debut in 2012 when BMW will introduce the new generation of the 3-Series.

Unfortunately this report doesn’t say anything whether the less powerful 1.6-liter turbo engine available for the MINI models is going to be available for future BMWs. We’ll let you know once more info surfaces.

This week, BMW presented their new generation of 2.0-liter petrol power units by launching the X1 xDrive28i TwinPower Turbo that is equipped with a 4-cylinder engine that outputs 245 hp (180 kW) and 350 Nm of torque. With this hardware configuration, the X1 does the 0-60 mph sprint in 6.1 seconds with the help of the manual transmission and 6.5 second with the automatic gearbox. BMW said that this new model does 35.7 mpg combined and a CO2 emissions level of 183 g/km.

This new generation of the engine is fitted with an all-aluminum crankcase, a high Precision Injection direct petrol injection system that has solenoid injectors, a high-performance twin-scroll turbocharging system as well as the proprietary VALVETRONIC variable valve control system. The X1 xDrive28i TwinPower Turbo is offered with BMW’s xDrive AWD system and will also be available with the M sports package. In addition, this X1 version comes as standard with DSC – Dynamic Stability Control which reduces the risks of under- and oversteering.

As standard, the X1 is fitted with a 6-speed manual transmission and for extra money; the X1 can be equipped with an 8-speed automatic gearbox. This BMW can be purchased with a sports leather steering wheel or an M-badge steering wheel, both of them being available with shift paddles for manually switching the gears.


A rather strange rumor appeared recently on the web, concerning Mercedes-Benz and its crossover plans.

It seems that besides the existing ML, GL, GLK (pictured above) and G Class models, all of which being quite popular all over the world, the German company is preparing a GLC model.

This is where things get interesting, as GLC stands for Geländecoupé. As such, some voices have claimed that this will be a direct rival for the BMW X6, a Sports Activity Coupe, while others say that it will attack the compact crossover segment, currently represented by the BMW X1.

We’re on the fence about the actual purpose of the GLC, but considering the impressive sales the X6 has achieved around the globe, we wouldn’t blame Mercedes for trying to get a piece of the pie.

Until then though, if you want a Mercedes-Benz SUV or crossover, you still have plenty to choose from.

END_OF_DOCUMENT_TOKEN_TO_BE_REPLACED


Canada is getting some pretty sweet deals these days in terms of cars. After being able to order the R performance package for the Kia Forte Koup, the country will now be getting its hands on the very hot Audi TT RS and will be able to get the new BMW X1 in sDrive variants (that’s rear-wheel drive) instead of just the plain xDrive ones.

The Audi TT RS is the choice for any respectable Audi roadster fan, delivering 335 HP to anyone with the money to afford it. But while Europeans have been enjoying the hot roadster for some time now, North Americans were denied this pleasure. Now, a lucky few (around 250) will be able to purchase the TT RS, as the Ingolstadt manufacturer will ship a limited batch of models. No other details are known, like what body type (coupe or convertible) the cars will be, but plenty of US fans will definitely be bummed if some don’t appear on US land.


Secondly, it seems BMW saw fit to deliver the rear-wheel drive goodness of the X1 to Canadians, as opposed to US citizens who can just order the all-wheel drive edition of the small crossover. But as we revealed in our test drive with an xDrive variant of the BMW X1, if you really want to do leave the comfort of regular asphalt, AWD is the best choice. Still, a lot of BMW fans will be bummer that the tail-happy variant of the X1 will be exclusive to those in the North.

END_OF_DOCUMENT_TOKEN_TO_BE_REPLACED


The BMW X1 is one of the newest models coming from our favorite Bavarian carmaker. We had a blast testing it out in some rough conditions and the overall impressions were quite favorable. Now, the tuning team at AC Schnitzer decided to play around a bit with the X1, which resulted in an array of performance and cosmetic packages for the crossover-ish BMW.

First off, let’s start with the performance upgrades. At the Geneva Motor Show, AC Schnitzer will present the ones for the diesel variants of the X1: the 1.8d now generates 171 HP, the 2.0d outputs 210 HP and, last but not least, the xDrive23d gets 240 HP. All of these upgrades will be available for both the sDrive and xDrive variants.


Mechanical upgrades also include things like a new suspension system and an aluminum strut brace, in order to make the big BMW more agile. Cosmetic enhancements include the new aerodynamic body kit, made out of a restyled front spoiler, rear skirt extension and rear roof spoiler, all improving down force, as well as a chromed “Racing” tailpipe decoration and new sets of wheels measuring 18- or 19-inches.

On the inside, the AC Schnitzer BMW X1 sports a silver-themed carbon interior trim, an illuminated leather gear knob, “Black Line” aluminum cover for the i-Drive system as well as for the handbrake handle and pedal set.

END_OF_DOCUMENT_TOKEN_TO_BE_REPLACED


BMW has just released a winter-themed ad, based around the new X1 model, which we recently had a chance to test drive.

It shows that the new baby crossover has what it takes to enter the X line of models, and is quite skilled in the snow. You can also send an X1-themed e-card to your loved ones by using the special service BMW has also revealed.

Hit the jump to see the video.
END_OF_DOCUMENT_TOKEN_TO_BE_REPLACED 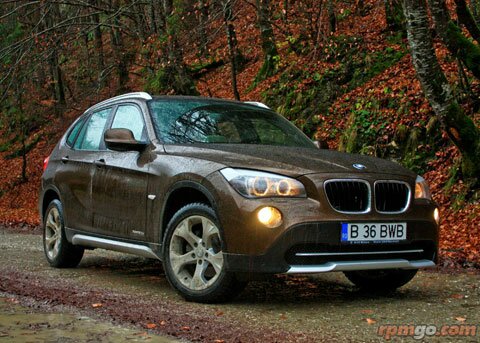 After lots of models that have basically created new niches, BMW is now giving it a shot with a new model, the X1, and last week I had the opportunity to play with the most recent Bavarian toy. In theory, the new X1 is a compact SAV (Sports Activity Vehicle); although in practice, you don’t really know what to think about it…is it a crossover?…a ‘pissed-off’ wagon?…do I like it?…do I hate it? Well, after 4 days of driving it, here are my conclusions: END_OF_DOCUMENT_TOKEN_TO_BE_REPLACED


My childhood, as well as almost anyone’s, was filled with fond memories about the Lego bricks and how much time I spend building fantastic things, at least in my mind, with them. Everything from cars, to robots or anything in between came to life thanks to the iconic building bricks.

But 800 kids from Germany were treated to something much broader in scope, as they built, with the help of 165,000 bricks, a life-size replica of the BMW X1 model. The whole project took four days, and was commissioned by BMW, which gave a certain amount of money for every brick used. The replica will be displayed at the BMW Welt (World, in German) convention, which will start in Munich on November 25.

You should also stay tuned to our website, as we just finished test driving the new BMW X1 through some interesting terrain, and the review will be up soon enough.

END_OF_DOCUMENT_TOKEN_TO_BE_REPLACED

Here’s how the new BMW X1 is made

In a very interesting move, especially for fans with technological inclinations and hobbies, BMW have released four videos showcasing the entire building process of the upcoming BMW X1 baby SUV. From the time the chassis is put together to the welding, painting and final assembly of the vehicle, all of the steps are carefully documented.

Here is the final video, with the first three ones available right after the jump.

END_OF_DOCUMENT_TOKEN_TO_BE_REPLACED

BMW X1 spotted during photo shoot, without any camouflage

Last year, at the Paris Motor Show BMW unveiled the Concept X1, a concept car that previewed the BMW X1, a compact premium SAV (Sport Activity Vehicle) built on the 1 Series platform. Meanwhile, the German carmaker has announced the final production version will debut later this year, at the Frankfurt Auto Show in September. But now we won’t have to wait for the German show to see the car, because the car was caught without any camouflage, during a photo shoot in Koln, Germany. Unfortunately there’s only one photo and the quality is not very impressive, but we can tell BMW has managed to keep the car’s look very close to the concept’s, our friends from BMW Blog saying that the only changes the X1 will get are modified taillights and front bumper and it looks like they’re right.

END_OF_DOCUMENT_TOKEN_TO_BE_REPLACED

Last week, before we left for the Paris, we showed you a video teaser of the BMW Concept X1, which debuted at the French show. The small crossover from BMW looks like it will be placed somewhere between the X3 and the 3 Series touring and, in the press release, BMW says that the concept car previews a future production model, which will be introduced within a year and which, according to the Bavarian carmaker, will be “the world’s first Sports Activity Vehicle in the premium compact segment”. The BMW X5 was a huge hit for BMW and it was the car that practically created the SAV/SUV segment, so we might say that BMW knows what they’re doing. But its smaller brother, the X3, was not that successful, so BMW probably doesn’t afford not having a strong competitor in the small SUV market. The X1 looks better than the X3, but still, we don’t like it, especially that front part, which is hideous. It remains to see what will power this car, because nothing was mentioned in the press release.

As a bonus, we got to meet Chris Bangle, one of the most controversial characters in the auto industry (a hero for some, the man that destroyed the BMW legacy for others), but he was busy preparing for a video interview and couldn’t answer a few questions.

I’m really curious, what do you think about the car?

BMW has uploaded a video on its website, in which we can get a glimpse of the BMW Concept X1, which will debut next week at the Paris Motor Show. The concept previews the production version of the X1 which, according to our friends from BMW Blog, will be available with both four wheel drive and rear wheel drive. Apparently, the car won’t be placed under the X3, in the BMW range, but more of something closer to the 3 Series touring. Sporting a range of four and six cylinders diesel and petrol engines, the X1 will first be marketed in Europe. Enjoy the video!