We have some great news for those of you who were waiting for the Bugatti Galibier. After months of rumors and speculations, the company’s president Wolfgang Durheimier confirmed for Auto Motor und Sport that the car will go into production, albeit a limited run.

Ever since it was revealed, there have been many rumors and speculation about a production model based on the Bugatti Galibier concept. According to some unidentified sources cited by Bloomberg, the car will be launched in 2013 or 2014 and will have a starting price of about $1.42 million (1 million Euros).
END_OF_DOCUMENT_TOKEN_TO_BE_REPLACED


Bugatti certainly shocked the automotive world a few weeks ago when it revealed the new Galibier supersedan model, which is set to be powered by the same, albeit more tamed, version of the Veyron’s W16 quad-turbo engine.

Now, after letting hype and speculation build up, the company revealed that the future model, which is set to appear in 2013 when the Veyron will be finally taken off the assembly line at the Molsheim factory, will cost around $1.5 million dollars, a hundred grand more than the Veyron.

For that amount of money you will be getting the massive W16 engine (hence the 16C moniker) which may or may not be coupled with a dual-clutch gearbox from VW, as rumors indicate the Germans at ZF who developed a new eight-speed one. This will give the Galibier “only” 800 HP, but will be able to reach a speed of 350 km/h (217 mph). It is estimated that about 300 models will be produced each year, so those with plenty of money should reserve one as soon as possible.

For those of us which don’t have an extra $1.5 mil laying around, we can only look at the pictures of the supersedan from Bugatti.

END_OF_DOCUMENT_TOKEN_TO_BE_REPLACED


Gee, that Bugatti Veyron sure is something right? With a $1.4 million price tag it sure is pricey for something with only two doors. Perhaps we can find something more family friendly at that price. Oh, good thing Bugatti just announced the Galibier sedan, which has all of the features of the Veyron, including its monster W16 quad-turbo engine but with 4-doors.

That’s right, the manufacturer has just revealed the Galibier, which if your history is up to date, is the name of a 1939 model from the car maker, the Type 57C Galibier Saloon, and the name of a mountain pass in the in the southern part of the French Dauphiné, Alps near Grenoble. The model was teased this summer, but everyone thought it would be yet another special edition of the Veyron.


But enough about history and geography, as according to 4WheelsNews, the Galibier will see the big W16 engine at its front, meaning that it will weight around 1,900 kg, or 4,200 pounds. This will reflect on its top speed, “only” managing to top out at 350 km/h / 217 mph, but it won’t need a second key, like the Veyron does, to put into race mode. It will be longer than the two-door supercar, by almost 80 inches, reaching 5.2 meters. 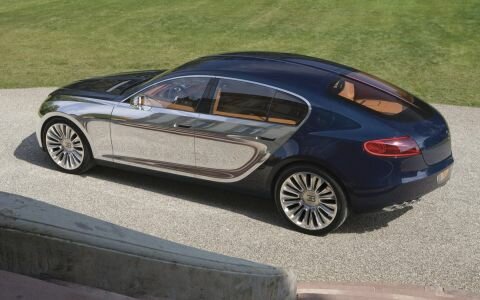 Bugatti declined to reveal any other details like availability or price, but we might see something in the near future, as the company won’t be appearing in Frankfurt this week.