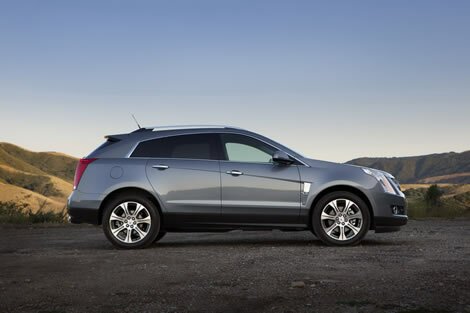 General Motors has announced this week that its 2012 Cadillac SRX crossover will get a new standard engine, a direct-injected V6 3.6-liter, which will be the only one available in the U.S., replacing the older turbocharged V6 2.8-liter and the V6 3.0-liter.

Aside from its new heart, the crossover will be offered as standard with Bluetooth (on all models), and heated steering wheel for the luxury, performance and premium trims. Customers that choose either the performance or the premium trim will also have the possibility to choose a brand new set of 20-inch rims.

The price list for the upcoming 2012MY Cadillac SRX will be revealed in the months to come, when the car will go into production.


It seems that new cars are being confirmed in the unlikeliest of places these days, as the LA Auto Show’s Twitter account has revealed that the 2012 Saab 9-4X crossover will be debuting at the convention this November.

The Saab 9-4X has been a long time coming, with a concept (pictured above) previewing the production model for quite some time. It will share the higher riding Theta platform with the Cadillac SRX, and target the American market.

Rumors are saying that engines from the 2011 9-5 will be appearing under the hood of the 9-4X. This means a 2.0-liter turbocharged four-cylinder and the a beefier 2.8-liter turbocharged six-cylinder will be available. As its name suggests, all-wheel drive will be present, with power coming through a six-speed automatic gearbox.

Those are the details, but expect more to be revealed as we approach the Los Angeles Auto Show in November.

END_OF_DOCUMENT_TOKEN_TO_BE_REPLACED


Cadillac has officially issued a recall for specific versions of its 2010 SRX crossover over a potential problem with the engine when it is fueled with a mixture of less than the required 91 octane rating.

547 vehicles are affected by this problem, all powered by the 2.8-liter V6 engine. It seems that when people fill up the tank with non-premium fuel, the engine cannot regulate its function, leading to the possibility of pre-ignition. This, in case you didn’t know, may result in damaged pistons or other internal components of the engine.

Owners of the affected 2010 Cadillac SRX crossovers will be notified as soon as possible by the carmaker. They will need to go to the nearest dealership to get the engine control modules fixed. For more details, you can contact Cadillac at 1-866-982-2339.

END_OF_DOCUMENT_TOKEN_TO_BE_REPLACED

Yesterday, GM has unveiled the new 2010 Cadillac SRX, one week before the car’s official debut at the Detroit Motor Show. The new mid-size luxury crossover follows Cadillac bold design philosophy and, to be honest, it looks pretty good. Under the hood, the vehicle will be powered by a new 3.0 liter V6 engine (a smaller displacement version of the 3.6 liter V6 from the CTS) with direct injection and variable valve timing, which delivers 260 hp and is mated to a Hydra-Matic 6T70 six-speed automatic transmission that helps save fuel by lowering the engine’s rpm at constant highway speeds.

Because it’s a crossover and owners might want to take it out on more rough terrain, the SRX will be also be availabe with all-wheel-drive systm with rear eLSD. “In icy or wet conditions, the system can transfer up to 100 percent of torque to the wheel that has more grip, while the eLSD also gives the driver enhanced control when cornering hard or completing a high-speed maneuver, such as a lane change, by momentarily applying more or less torque to either of the wheels to help the rear of the vehicle more closely follow the direction of the front wheels. The suspension includes a real-time damping system in conjunction with AWD that adjusts shock damping rates in response to road conditions for a smooth ride quality.”

The SRX will also have plenty of safety features, such as the use of martensitic steel in the fully enclosed rocker sections which improves the protection in the case of side impacts, standard head curtain side air bags, standard front seat-mounted pelvic/thorax side air bags, front safety belts with dual pretensioners and load limiters, rollover mitigation sensors, a pedal release system, trailer stability assist. The SRX was also designed to meet European pedestrian protection standards; and the front bumper is positioned for greater compatibility with car bumpers.

The 2010 Cadillac SRX production is scheduled to begin in the second quarter of 2009 and the first cars will hit dealerships soon after that. Check out more photos after the jump. END_OF_DOCUMENT_TOKEN_TO_BE_REPLACED

Official photos of the 2010 Cadillac SRX

The luxury crossover market is growing more and more, with examples like the BMW X6 or Mercedes GLK. And the profit which is to be gained has also attracted american producer Cadillac, which recently showed us the first official photos of its new model, the SRX. Although it will be launched some time next year, the car is set to start a tour of the grand motor shows, starting with the one in Paris, in October.

This new model does have a lot in common with the Provoq concept, showed at last year’s Detroit Motor Show, and the represents the evolution of the design line found in the CTS and CTS-V sedans. The level of craftsmanship and the power which will be available to the driver are, in Cadillac’s view, the strong points of the SRX, which will definetely recommend it in the luxury crossover and small SUV range. Although the american producer is keeping the tehnical specs under lock and key, rumours have started going around that an AWD tehnology will be employed, and that one of the engines powering this car will be the 3.6 litre V6. More details are set to come most probably after it’s debut in Paris. One more photo after the jump. END_OF_DOCUMENT_TOKEN_TO_BE_REPLACED