Skoda Belgium offers a Fabia on Facebook in new campaign 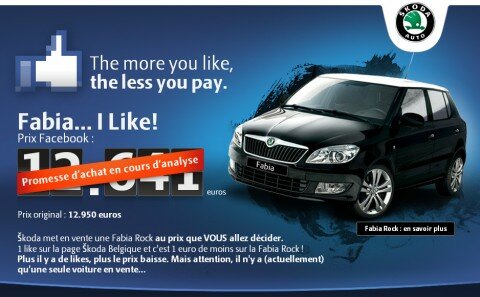 Facebook is quickly becoming a serious weapon in promoting new cars. We’ve seen Mazda feature its new Mazda2 in a special game for the social network, while Ford has used it to unveil the 2011 Explorer SUV.

Now, Skoda Belgium has decided to offer a new Fabia Rock edition as a prize in a brand new campaign, centered around Facebook.

Basically (given our intermediate French skills), if people give 1 Like to the Skoda Belgium fan page, 1 Euro gets deducted from the price of the Fabia (12.950 Euros).

For two days people can like the Skoda Belgium page, share the news with others, and then place a bid for the Skoda Fabia Rock edition. The more likes, the less money you will have to pay for the car.

Currently a bid has already been placed, so Skoda is analyzing it. But if it gets turned down, you’ll need to place your own as soon as possible.

Overall, this is a pretty interesting campaign, and it gets a lot of props for originality. While you’re still on Facebook, why don’t you like our own website. We won’t give away a car (not yet, anyway) but you’ll be able to stay up to date with the latest news from our website.

END_OF_DOCUMENT_TOKEN_TO_BE_REPLACED

Perhaps you may have heard about Volkswagen’s newest Fun Theory marketing campaign, which reveals that people’s behavior can be changed quite easily if we provide fun alternatives to things they rather won’t do. We’ve already seen how it can make people take the stairs more often in favor of the escalators, and now, once again in Sweden, the company decided to persuade people to use the rubbish bins in parks.

How can you do that? By making the world’s deepest bin that’s how. Now don’t go thinking the carmaker actually began to dig a litter bin or something. It just added two speakers and a falling noise to one of the bins, in order to make it sound like the piece of trash is falling a very long way.

The result speaks for itself, the sanitation company managed to collect over 72 kilograms (158 pounds) of trash, with 41 kgs (90 lbs) more than the regular trash can collects in a day. See for yourself the reactions the innovative idea has among park-goers in the video below.

END_OF_DOCUMENT_TOKEN_TO_BE_REPLACED

Mercedes Benz announced that, starting this month, a new advertising campaign will start. Called “The Culture of Driving”, the brand campaigns for the new generations of Mercedes Benz SL, SLK and CLS will employ all channels of communication (print advertisements, mobile marketing, online communication, dealer marketing and events).

Dr. Olaf Göttgens, Vice President Brand Communications Mercedes-Benz Cars, said that “with this campaign we are for the first time displaying our new strategic approach, which we sum up with the motto ‘The Culture of Driving’. The aim is to further sharpen the profile of the Mercedes-Benz brand”.

The main point of interest of this campaign the new SL, which is featured in a cool new TV spot, called “Sternschnuppe” (Shooting Star), which you can watch after the jump. Enjoy!

END_OF_DOCUMENT_TOKEN_TO_BE_REPLACED

$150 million campaign for the 2008 Chevrolet Malibu

Yes, you’ve read right. The advertising campaign for the 2008 Chevrolet Malibu, called “The Car You Can’t Ignore” will cost around $150 million. According to Advertising Age, the campaign will have three stages: the first one already started, with a massive online blitz of Web portal ads(which GM hopes will send at least 5 million viewers every day), plus nationwide billboards, print ads, building wraps and TV spots.

The second stage, called “Reveal” will try to use positive review to generate a good impression and buyers’ interest. About the last stage, the third one, Chevrolet didn’t say much, except that it would involve national TV spots. All these efforts are meant to bring back the buyers to the American cars, which lately were put in a shadow cone by Toyota.

Stay tuned because we also got an invitation to drive the 2008 Chevy Malibu, in Santa Monica, and we’ll be there to test it and share with you what we experienced. Meanwhile, check out this video of Bob Lutz, Chairman of GM North America, presenting the Chevy Malibu, after the jump.
END_OF_DOCUMENT_TOKEN_TO_BE_REPLACED

“The Illusive” short-film ad from Mercedes-Benz

Hm, this is interesting. Here’s “The Illusive”, a short film ad that is a part of a Mercedes-Benz campaign to attract younger people and to improve brand awareness.

Using what they term a â€œBrand Layerâ€, Loaded Filmsâ€™ FLOADED technology turns the film into an interactive advertisement, where the user can pause the video to go to brand profile sites, which tie back in to the film by showing behind-the-scenes video and cut footage.

The film chronicles a spy photographerâ€™s attempts to make his last-chance deadline to deliver some new spy shots to his employer.

Cadillac announced that they will spend somewhere between $30 million and $50 million on the advertising campaign for the 2008 Cadillac CTS. In an interview for Automotive News, Jim Taylor, Cadillac’s general manager said:

“Weâ€™ll put the pedal to the metal over the next couple of months to make sure the CTS is noticed. We absolutely will not have an underfunded CTS launch.â€

So get ready for some serious Cadillac promotion in the future.
END_OF_DOCUMENT_TOKEN_TO_BE_REPLACED

Another Audi A4 promo video

Yesterday we showed you “The Chase” promo video for the upcoming Audi A4. And now we have another one released by Audi. W have the sea, we have sun and of course, we have the A4. Enjoy!

Audi A4 “The Chase” promo video

Here is Audi’s promotional video for the upcoming A4, called “The Chase”. Nothing new, but still, pretty nice.

Lexus made a press release in which announced that it will start a Â£6 Million ($12 million) advertising campaign to promote its range of hybrid models for the fourth quarter of 2007. The campaign will include national TV, landmark billboard, on-line, and magazine activities. The first TV ads will air on September 17. Read the press release after the jump.
END_OF_DOCUMENT_TOKEN_TO_BE_REPLACED