Ford Mustang Customizer and Customers’ battle across the Internet 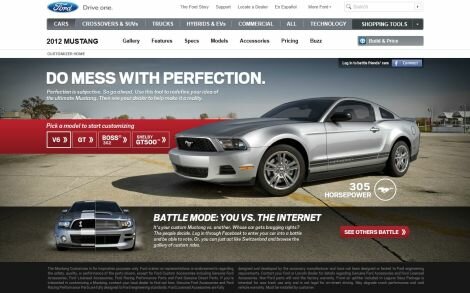 Today Ford launches a new competition for its customers, combining their car configurator with fans’ passion for their cars. So, all they have to do is to make their own Ford Mustang and then pit it online, against the ones built by others.

Using the configurator, fans can chose between all varieties of the Mustang (Mustang V6, GT, Boss 302 or Shelby GT500), start customize it according to his own wish and liking and then threw it into the battle. They offer three different backgrounds, five different angles and hundreds of accessories from which to choose.

“This site lets Mustang fans customize cars to their heart’s content. (…) It’s a simple-to-use layout that lets users take the base design of Mustang and run with it.” said Brian McClary, Ford social and emerging media specialist.

The difference between cars is into the wheels, body-kits, decals, grilles, decklid spoilers and other parts from Ford Racing Performance Parts catalog that customers use in order to create their own Ford Mustang.

The next step is to upload the “work of art” on Facebook page and wait to see others reaction and opinion about the design, plus ask for people to vote for their car. In addition to this, if you really love the result of your work, Ford will help you make it real: fans can print their design and bring it to their local dealer. All Ford performance and styling pieces can be purchased there. For the other parts, they would have to look for them to their vendors.

“Customers love to make Mustang their own, one that suits their taste; this is the perfect way to let them test out their design and imagine what’s possible. (…)The interactive aspect also adds a whole new dimension and lets more people get in on the fun.” said Jim Owens, Mustang marketing manager.

So, start creating your own Ford Mustang on Ford.com/cars/mustang.


Subaru fans were treated to a mighty impressive surprise this spring, when the Japanese company officially revealed the new and improved 2011 Subaru Impreza WRX and WRX STI performance models, in both five-door hatchback and four-door sedan versions.

You can add in all the types of extras you want, but prices will increase quite fast. Sadly, gold wheels or yellow decals aren’t included.

END_OF_DOCUMENT_TOKEN_TO_BE_REPLACED


General Motors is betting big on the compact segment in the USA, and is getting ready to launch the Chevrolet Cruze sedan, after some impressive sales in Europe.

We’ve already heard almost everything there is to know about the new car, but now GM has officially revealed the configurator for the Chevrolet Cruze.

Prices start at $16,995, for the Cruze LS trim, but you can even reach a dizzying $26,800, if check all the options and go with the Cruze LTZ trim version. Check out the configurator at this address.

The Cruze is set to appear in dealerships in the following weeks. GM is also rumored to be considering a high performance SS version, as well as an Eco model, with lowered emissions and improved fuel average.

END_OF_DOCUMENT_TOKEN_TO_BE_REPLACED


The 2011 Ford Explorer is the one of the Blue Oval’s biggest bets this year, and as such, it has been promoted through a lot of new ways.

We’ve already seen the official launch yesterday, and now the online car configurator is already available, albeit in a not-so-complete way.

Customers are able to configure their own V6-equipped Explorer, as the 2.0-liter EcoBoost version isn’t available for configuration just yet. Still, prices for the base Explorer, with the 3.5-liter V6 and front-wheel drive start at $28,190.

Afterwards, things increase to as much as $39,190 for the top-of-the-range Limited trim line, with the same engine and four-wheel drive. That doesn’t even include any extra options you might want, nor the $805 destination charge.

Still, if you want something to do until the 2011 Ford Explorer hits dealerships this winter, the configurator will keep you busy.

END_OF_DOCUMENT_TOKEN_TO_BE_REPLACED


A lot of people have been eagerly awaiting the launch of the 2011 Jeep Grand Cherokee model. But seeing as how the new SUV will arrive in dealerships a few weeks from now, Chrysler has decided to make the wait a bit more manageable.

As such, after revealing the patriotic ad for the SUV and the new iPhone app with full vehicle information about the new model, the company has now presented the online configurator for the 2011 Jeep Grand Cherokee.

Until you’ll be able to configure one at your local Jeep dealership though, the new Grand Cherokee configurator is the next big thing. Check it out at this address.

END_OF_DOCUMENT_TOKEN_TO_BE_REPLACED

Configure your own Ferrari 599 GTO, hope you win the lottery


Ferrari made a lot of its fans extremely happy last week as it finally introduced the 599 GTO model, based on the 599 GTB Fiorano and borrowing technology from the Formula 1 team and the track-only 599XX performance model.

The result of this combo? Oh, just a 661 HP and 457 lb-ft V12 supercar capable of sprinting from 0 to 62 mph in just 3.4 seconds while being the fastest road-legal model Ferrari ever made.

But until the official unveiling at the Beijing Motor Show, the Italian supercar manufacturer has allowed its fans to configure their own 599 GTO, thanks to a new online car builder. You can choose anything from the paint scheme, to the wheels or the bucket seats.

Sadly, this still won’t allow most of us to actually afford one of the 599 models that will be made. Still, you can check out the Ferrari 599 GTO car configurator here.

END_OF_DOCUMENT_TOKEN_TO_BE_REPLACED


Definitely one of the eagerly awaited reveals from the 2009 Los Angeles Auto Show was Ford’s new Fiesta, designed for its native USA market, and available in both normal hatchback form and sedan.

We already published plenty of details about the great little B-segment car, but now you can customize your own model, as Ford has revealed the online configurator, available at this address. You can check out all of the options, including the prices for each one and see just how much it will cost to make the Fiesta of your dreams.

Those bent on buying a model already will be able to pre-order and reserve one, as Ford not only encourages it, but also throws in a turn-by-turn SYNC navigation plus a premium sound system for no extra charge. You can check out the photo gallery of the US-spec Fiesta below in case you missed it the first time.

END_OF_DOCUMENT_TOKEN_TO_BE_REPLACED

The Frankfurt Motor Show brought forth an overload of motoring news, and sadly some got caught up in the rush and were forgotten. Luckily this video of Audi’s Car Configurator working on Microsoft’s innovative Surface technology wasn’t one of them.

And it is definitely worth your time. The things showcased in the video, like selecting the color, accessories or rims, are very impressive and will leave most Audi fans speechless. Take a look and don’t be afraid to drop a comment below and tell us your opinion. Enjoy!